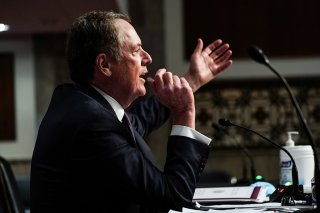 We could all use a little joy in our lives right now. Months of social distancing and economic despair have left many of us in need of something, anything, to cheer us up. However, burdensome tariffs on a whole host of European food, wine, and spirits may be spoiling fun for many and are hurting already suffering businesses. In a shortsighted move, and despite a fresh challenge by a bipartisan group of thirteen senators, the United States Trade Representative (USTR) has declined to drop tariffs on these goods, further harming the crippled U.S. food and beverage industry—and further limiting our freedom to enjoy life’s pleasures.

Although products such as Stilton cheese and gourmet olives may seem frivolous, at a time when many forms of recreation are off limits and international travel is virtually impossible for U.S. citizens, we need to seek pleasure where we can. Instead, U.S. consumers, business owners, and workers are being harmed by action taken as part of a retaliatory trade war between countries that should be allies.

If you’re a fan of French wine or single malt scotch you may have noticed that lately you’ve been  paying significantly higher prices, or finding your treats harder to source. That’s because in October 2019, USTR applied 25 percent tariffs to more than 150 products imported from European Union countries. The tariffs were originally levied after the United States won a WTO case against the European Union for unfair subsidizing of Airbus. This suite sparked enmity between the United States and the EU, which has since spiralled into a tit-for-tat trade war. As the devastating economic effects of the coronavirus pandemic continue to be felt—especially by the hospitality industry—the removal of these tariffs cannot come soon enough for American consumers and businesses.

Since their inception the tariffs have received widespread criticism from both political parties and from affected industry groups. The most recent is the August 7, 2020 letter to the U.S. Trade Representative signed by seven Republican senators and six Democratic senators, which called for the elimination of these tariffs to ease the strain on American workers. The letter, Reuters reports, explained that U.S. businesses, who are already struggling to recover from the crippling blow of the coronavirus pandemic, are facing increased economic hardship due to the higher costs of these products. Restaurants, importers, and distributors of European food and beverages have seen decreased demand as people were forced to stay home, and now need all the help they can get.

A transatlantic coalition of seventeen European and U.S. beverage associations has also weighed in, urging both the United States and EU to end the trade dispute that is hurting their businesses, calling for both sides to remove current tariffs and forgo new ones. After the United States introduced its October 2019 tariffs, the EU retaliated with its own 25 percent tariff on American whiskey and bourbon. Since it went into effect, exports to the region, the U.S. spirit industry’s largest export market, fell by 33 percent, hitting small distillers particularly hard. In their statement, the coalition says that their sectors have already suffered so much with the closing of bars and restaurants, and that the increased financial burden of these trade barriers are intensifying the suffering and job losses.

The coronavirus pandemic has certainly added new fuel to the fire and increased the stakes, but these are not the first pleas for the USTR to rethink the tariffs. In January Nydia M. Velzquez, House Small Business Committee Chair, along with eight Committee Democrats wrote to Robert Lighthizer, U.S. Trade Representative, voicing concerns that the tariff could lead to the loss of thousands of American jobs. The Congressional Wine Caucus, with a bipartisan membership of 106, sent their own letter to Lighthizer, urging him to leave the $220 billion American wine economy out of the action. Their calls have remained unanswered.

The issue is bigger than wine and cheese, although thousands of livelihoods depend directly on these seemingly unnecessary products. As we have seen with previous trade wars, retaliatory action like this has a tendency to spiral, covering an ever-increasing array of products. The EU has also lodged its own WTO claim against Boeing, and has threatened further tariffs of their own, so it seems likely that if the United States does not back down things will only get worse, both for American consumers who enjoy European products and for those that buy and sell them.

Although the tariffs were originally imposed to punish the European Union, when everyday Americans trying to struggle through tough times are the ones suffering, we have to ask: Who ‘s really being punished? And is it worth it?

Alice Calder is a contributor for Young Voices and TradeVistas, writing on issues in trade, the future of work, and the intersection of economics and culture. Follow her on Twitter @AliceCalder.