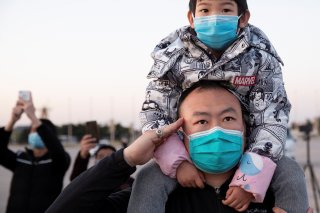 An Iranian health ministry spokesman backtracked after calling Chinese statistics on the novel coronavirus a “bitter prank” on Sunday.

China claims to have nearly stopped the spread of the novel coronavirus in its country of origin. U.S. officials have questioned the accuracy of the Chinese government’s statistics. In a surprising turn of events, the health ministry of China’s close ally Iran is also questioning Beijing’s statistics while defending its own response to the pandemic.

“China has played a bitter prank on the world by presenting statistics on COVID-19,” health ministry spokesman Kianush Jahanpur told reporters, using an acronym for the novel coronavirus disease. “All the countries stricken by the disease thought it was similar to and easier than the flu, citing Chinese statistics. It is not like that, and it cannot be said that the duration of this disease is two months.”

Jahanpur added in a social media post that “scientific discussions can never and should never be confused with politics...we have more confidence in our own findings.”

China’s foreign ministry was not pleased. Amb. Chang Hua, the Chinese ambassador in Tehran, responded to Jahanpur’s Twitter post with a brief missive: “The Ministry of Health of China has a press conference every day. I suggest that you read their news carefully in order to draw conclusions.”

Jahanpur followed up with a more apologetic post, claiming that “China’s support for Iran in these difficult days is unforgettable. Don’t be fooled by strangers.”

Iranian officials have in turn spread conspiracy theories, initially promoted by the Chinese foreign ministry, that the novel coronavirus was created by the U.S. government.

The United States, however, believes that the Chinese government itself is not being forthcoming about the coronavirus. U.S. intelligence agencies have concluded that Beijing does not know the full extent of the coronavirus epidemic within its own borders.