Former President of Mexico Ernesto Zedillo: ‘The Nuclear Threat Is Back’ 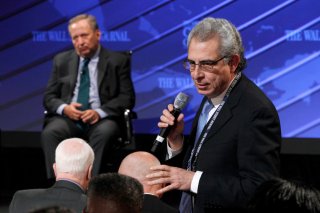 Although Mexico has no nuclear weapons, its former president Ernesto Zedillo knows their dangers well: “Humanity has two fundamental existential threats. One is climate change, but a more severe one is the nuclear threat.”

As a leading member of The Elders, a coalition of senior statesmen, peace activists, and human rights advocates, Zedillo sees the nuclear issue as one that demands more attention and action, particularly among younger generations who haven’t directly experienced the threat of nuclear annihilation. “My generation grew fearful of nuclear weapons,” Zedillo shared recently on Press the Button, “sadly, when I talk to my students these days, it is not one of their concerns.”

This lack of engagement among younger generations is one of the reasons for Zedillo’s work with The Elders to bring awareness to key global issues. Established in 2007 by Nelson Mandela, The Elders is a coalition of former leaders from across the world that aims to engage with the global community and civil society to resolve conflict and address its root causes, challenge injustice, and promote ethical leadership and good governance. This, understandably, includes addressing and reducing the risk of a nuclear incident.

Indeed, it is Zedillo’s own personal experience with the nuclear threat that drives his long-standing concern about nuclear weapons and their devastating effects. “I remember being already concerned about nuclear weapons when I was ten years old,” Zedillo told guest host Liz Warner, “one thing that happened around that time was the Cuban Crisis. And of course, we knew about the atrocities that happened in Hiroshima and Nagasaki—I grew up knowing of that, so it is only natural that when I became a person in public service, particularly in positions of authority, this topic became one of significant concern.”

Despite the daunting task at hand, Zedillo remains dedicated to diminishing the threats associated with these weapons. “I want to work hard to prevent such a catastrophe [from happening],” he noted, “this is not like COVID-19: if we have a nuclear interchange, that will be it.”

In order to identify and explore what this cooperation might look like, The Elders published a Nuclear Nonproliferation and Disarmament policy paper in late 2019 that outlines concrete, actionable steps that must be taken to address the growing risks associated with nuclear weapons and current doctrines. Outlining the top-line positions taken, Zedillo noted the Elder’s opinion that “steps must be taken to regain some stability, and some prospect of control and reversal of what could be a nuclear race.”

This practicality—named by The Elders as the “minimization agenda”—is, in Zedillo’s view, essential to making substantive and exemplary progress on reducing the threat of a nuclear incident. “We need to approach this process step-by-step, doing things that materially increase stability and security, which right now we don’t have. I think we are moving towards a more unstable and less secure system.”

Though the risk of nuclear war still looms large, Zedillo finds hope in the tireless work of nonproliferation and disarmament advocates whose recent successes, including the recent ratification of the Treaty on the Prohibition of Nuclear Weapons, represent a radical shift in how the international community thinks about nuclear policy.

A world free of nuclear weapons, in Zedillo’s mind, “will not render a perfect world, but I think it would be a much safer world.”

The entire interview with former President of Mexico Ernesto Zedillo is available here on Press the Button.