Here's How Mitt Romney Could Win in 2020 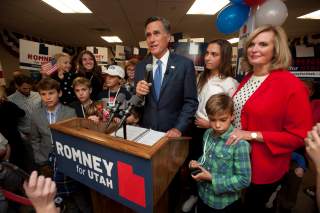 It has been speculated that Mitt Romney’s Utah Senate seat could serve as a prelude to another Presidential run. In the most ambitious version of events, he could even challenge Donald Trump in the 2020 primaries, newly legitimized and augmented by his actions in the Capitol Building. This would allow moderate Republicans to reclaim their party’s mantle and unroot alt-right influences. But would Romney do it?

His willingness to unequivocally challenge Trump could be seen either as a pro or con by Republicans, depending on their opinions of the sitting president. Trump’s vulgarities, bullying behaviors, and lifestyle all run counter to the values of many Utah residents. But Romney never premised his campaign on a no-holds-barred opposition. He espoused fairly traditional conservative talking points, such as a balanced budget and an end to federal overreach. He indicated that he would respect the will of voters, find common ground, and express disagreements whenever appropriate, perhaps not unlike the late Senator McCain, Romney’s one-time primary rival.

Still, conservatives and libertarians who have grown weary of Trump’s controversial, highly erratic leadership style may harbor hopes that Romney will serve as something more. Even if he doesn’t conspicuously challenge the President, he might provide a stabilizing force.

On November 6, Romney seemed to validate these hopes. In a victory speech, he characterized his election as a call for greater dignity and respect. He emphasized the equality of all Americans, regardless of gender, ethnicity, sexual orientation, race, or place of birth.

“I believe that one person, doing the right thing, at the right time, can have a lasting impact. I’ll work with good men and good women on both sides of the aisle to serve the cause of America’s enduring greatness,” he said.

In a recent essay, he called the free press a pillar of democracy, sharply contrasting Trump’s dismissive name-calling.

Trump had technically endorsed Romney’s bid, labeling him a worthy successor to Orrin Hatch. But the President and Senator-elect don’t always see eye to eye. Romney has stated that Trump’s “coddling of repugnant bigotry is not in the character of America.” Trump claimed that Romney once begged him for an endorsement, crudely stating, “I could have said, ‘Mitt, drop to your knees,’ he would have dropped to his knees.” Trump dismissed Romney as a failed candidate who “failed horribly,” even though Trump himself failed in his 2000 bid for the Presidency.

Romney’s character, seasoned business experience, and moral values all elevate him above the impulsive, suppressive, racist, and sometimes paranoid demeanor with which Trump has led the country. Romney initially sought election to the U.S. Senate in the state of Massachusetts, served as Governor, and made two bids for the presidency. There is no doubt that he has been persistent, perhaps stubbornly so; but he has also been prescient.

It was Mitt Romney who debated Barack Obama onstage during the 2012 presidential debates and made the case that Russia poses a threat to U.S. national and economic security. Democrats have developed a convenient case of amnesia when it comes to President Obama’s rebuttal. Obama scoffed and mocked Romney for characterizing Russia as a geopolitical threat. “And the 1980s are now calling to ask for their foreign policy back, because the Cold War’s been over for 20 years,” said Obama witheringly, before taking a shot at Romney’s lack of direct foreign policy experience. Just two years later, Obama stood by and allowed Russia to invade the territory of its neighbor, Ukraine.

Trump has acted similarly to Obama by ignoring Putin’s aggressive territorial expansion and dismissing his election interference as fake news. The Democrats now criticize Trump for his dealings with Russia, in spite of the fact that Russians caused civilian bloodshed in Ukraine and Syria during Obama’s watch. Romney correctly diagnosed the threat in advance, revealing his prescient judgment. Obama’s ignorance and passivity resulted in massive bloodshed that continues to this day.

Unchecked by the Trump White House, Putin feels emboldened. In the pages of the National Interest, Gary Hart has noted that a friendship between the leaders of two great powers is a risky thing. “At its worst, it confuses personal relations with complex disparities in national interests,” stated Hart. Romney is one of the few leaders who expressed sound judgment on this issue before it escalated to current crisis levels. He could provide clarity. His willingness to challenge Trump, from within his party, could be an asset to the nation.

In addition to his sound judgment on foreign affairs, Romney was also prescient domestically. In 2012, he was intensely criticized for suggesting that the Democratic Party was trying to win over voters with “free stuff.” And yet, a twenty-nine-year-old woman from the state of New York was just elected to Congress for promising precisely that, absent a well thought-out plan.

Now, many are hoping that Mitt Romney will bring balance to his fractured party and defend the nation. The Senator-Elect has made mistakes in the past, perhaps relying too much on the analysis and management tools that served him well while working in private investment firms. If he speaks from the heart instead, he could be much more effective at guiding foreign policy and bridging domestic divides.

David Pring-Mill is a media and communications consultant to startups, NGOs and political causes.