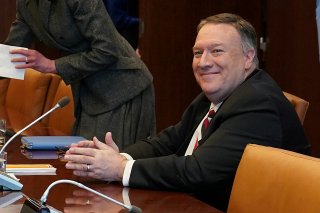 Nine members of Congress signed a letter on Monday calling on Secretary of State Mike Pompeo and Treasury Secretary Steve Mnuchin to “substantially suspend sanctions on Iran in a humanitarian gesture to the Iranian people” amid the growing coronavirus crisis there.

The Trump administration insists that its “super-maximum economic pressure” campaign against Iran has not hampered the country’s response to COVID-19, the deadly coronavirus disease that has killed over two thousand Iranians. But a growing chorus of voices—from British diplomats to American lawmakers—is calling on the Trump administration to loosen economic sanctions in order to aid the global fight against the coronavirus pandemic.

“Pandemics know no borders,” the congressional letter argues. “Allowing this crisis to become more dire in Iran threatens significant harm not only to the people of Iran but also to people in the United States and around the world.”

The first confirmed case of the new coronavirus disease in the state of New York was a healthcare worker returning from Iran, although other carriers spread the virus more widely. New York has seen over twenty thousand confirmed cases of COVID-19 and one hundred fifty deaths since the outbreak began.

Rep. Alexandria Ocasio-Cortez (D–N.Y.) led the appeal to key members of the Trump cabinet. She was joined by fellow freshman representatives Ilhan Omar (D–Minn.) and Ayanna Pressley (D–Mass.). The three are often known as “The Squad” for their national media profile among progressive Democrats.

Barbara Lee and Jared Huffman, two Democratic representatives from California, also signed. Lee was the only member of Congress to vote against the war in Afghanistan in 2002.

“The Iranian government has made numerous errors in their handling of the crisis, including by failing to act swiftly or take sufficient quarantine measures,” the letter states. “However, sweeping U.S. sanctions have also harmed Iran’s public health sector by limiting their ability to import medical devices and medicine manufactured in the West.”

The congressional letter asks Pompeo and Mnuchin to lift sanctions on “major sectors of the Iranian economy, including those impacting civilian industries, Iran’s banking sector, and exports of oil.”

A spokesperson for the U.S. State Department told the National Interest earlier in March that “the Iranian people know that any sanctions relief would go to sponsor terrorist, not humanitarian activities.” The spokesperson insisted that U.S. sanctions do not apply to food and medical goods, calling claims to the contrary “Chinese and Russian propaganda.”

“Either U.S. authorities do not understand how international trade works, or they are being dishonest about the situation,” said economist and Eurasia Nexus Partners co-founder Bijan Khajehpour at a Tuesday event hosted by Al Monitor. “Banking, insurance, and shipping—they’re all sanctioned.”

Josep Borrell, the top European Union diplomat, stated that Iran and Venezuela “are in a very difficult situation mainly due to the U.S. sanctions that prevent them from having income by selling their oil” at a Monday meeting about the coronavirus crisis.