How America Has Become a Theater of War 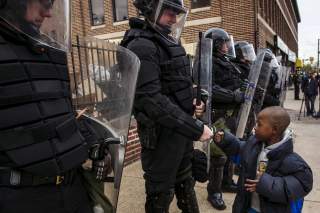 Police militarization is supported most tangibly from the arming of domestic agencies with excess military hardware through the “1033 Program.” Recently re-expanded by President Donald Trump, this program can include assault rifles, grenade launchers, explosives, even armored vehicles and aircraft. The Law Enforcement Support Office (LESO) oversees 1033 which at one point followed the motto: “from warfighter to crimefighter.” Per LESO, overall, 1033 has distributed $6.8 billion in military hardware to police. Most infamously at least five hundred police agencies have received bomb-resistant MRAP vehicles. This distribution began in the 1960s, when the anti-drug and anti-terror programs shifted the nature of police identity and operation in a more militaristic direction. Radley Balko’s 2013 article, Rise of the Warrior Cop, described the post–9/11 period as “opening the spigot” for federal Department of Defense support for domestic militarization efforts. For example, the Edward Byrne Memorial Justice Assistance Grant (JAG) program, the leading source of federal justice funding, supports a wide range of program areas including courts, drug treatment and crime prevention. However grantees spent 64 percent of 2012–2013 funds on law enforcement, with hundreds of state and local agencies investing in weaponry, tactical vests and body armor. In addition, the Department of Justice offered 220 cities $114.6 million in grants to staff 800 law enforcement positions with post–9/11 veterans. The federal government has supplied the arms and incentives which facilitate this transition towards domestic militarization, thinning the line between the DoJ and the DoD.

Law enforcement gradually incorporates not only military weaponry, but also counterinsurgency doctrines and tactics. The late LAPD Chief and co-creator of SWAT teams, Daryl Gates, wrote in Chief: My Life in the LAPD: “we studied what a group of marines, based at the Naval Armory in Chavez Ravine, were doing. They shared with us their knowledge of counter-insurgency and guerrilla warfare.” In the 1960s, SWAT developed as rapid response to violent racial and labor unrest. But now police increasingly use SWAT for nonviolent crimes; a sample showed 80 percent served warrants, usually for drugs, with 65 percent yielding no evidence. SWAT raids have escalated from three thousand annually in the 1980s to what criminologist Peter Kraska estimates as many as eighty thousand annually. Such intense prevalence of paramilitary anti-drug raids is an increasingly dangerous trend that brings global conflicts homeward. The War on Drugs and War on Terror rhetoric now often merge into “narcoterrorism,” integrating domestic and foreign campaigns such that confronting the drug trade domestically appears an extension of foreign policy against groups like Mexican drug cartels, FARC, Shining Path, or Hezbollah. Organized crime expert Vanda Felbab-Brown’s 2011 speech to the U.S. House of Representatives, “Narcoterrorism and the Long Reach of U.S. Law Enforcement,” discussed foreign “narcoterrorism,” warning against “indiscriminate and uniform application of law enforcement,” and concluding that the “application of law enforcement without prioritization can indeed push criminal groups into an alliance with terrorist groups.” Intensive and unstrategic State repression may catalyze the “narcoterrorist” nexus rather than diminish it. We must not let military operations, whether anti-drug or anti-terror, bleed over onto American soil and create the very threats we seek to thwart.

Parallel to the rising military nature of police, the military increasingly assumes policing capacities and domestic surveillance operations. The 1878 Posse Comitatus Act (PCA) forbade the government from using the armed forces for most law enforcement functions, however, an ongoing integration of military and police surveillance and intelligence jeopardizes this. Interagency partnerships, called Fusion Centers, created between 2003–2007, pair state and local law enforcement with the Department of Homeland Security and DoJ for intelligence gathering, analysis and dissemination. Some Fusion Centers host active-duty military personnel, in ambiguous roles, and some use the U.S. Navy’s “Law Enforcement Information Exchange” system. And this trend escalates currently. The Trump administration seeks to deploy the military for border policing, in administrative and surveillance roles. Military personnel could not make direct detentions but would, however, use drones and watchtowers in conjunction with law enforcement. This will prove controversial and further builds up the American homeland as a theater of operations.

Whether the transformation of domestic agencies, or the expanded use of military as police, these trends painfully polarize American culture. Despite a longstanding trend of police being a safe profession, police nevertheless feel besieged. Recent decades have proven the safest for police, yet police unions frame these debates over weapons and tactics as life and death for officers on the ground. Comparing the defensiveness and “War on Police” mentality against previous generations’ thoughts on policing reveals the entrenchment of our current era. Policing’s zeitgeist has changed dramatically from when fictional 1960s sheriff Andy Taylor opined, “When a man carries a gun all the time, the respect he thinks he's getting might really be fear. So I don’t carry a gun.” Modern police statements convey very different sentiments, and many Americans hold grave reservations about how law enforcement relates to the public.

Public trust in police erodes under militarization and polarizes the public. A since deleted 2012 DoJ report cautioned against military uniforms, “The more militaristic look of the BDUs, much like what is seen in news stories of our military in war zones, gives rise to the notion of our police being an occupying force.” During the 2014 Ferguson unrest and 2015 Baltimore protests, images of heavily armed police units pointing assault rifles at community members and photographers startled much of the country. Similarly, during the Dakota Access Pipeline protests at Standing Rock, the deployment of military vehicles repressing Indigenous communities seemed reminiscent of colonial history most modern Americans would like to consider behind us. Furthermore, according to a UC Berkeley study, militarized police provoke protesters: “protests tend to turn violent when officers use aggressive tactics, such as approaching demonstrators in riot gear or lining up in military-like formations.” These highly militarized responses to civil unrest decrease public confidence in police, as demonstrated in a 2015 Gallup Poll which measured U.S. confidence in police as its lowest in twenty-two years.

This combination of worsening polarization and reliance on war-styled policing results in harmful consequences for many Americans. Distressingly, more Americans die each year from police than in the last thirty-six years of mass shootings combined. In 2015 and 2016 alone, police killed a third the number of Americans as died in service over the last seventeen years in the War on Terror. And terrorists kill far fewer Americans than police do. Contrast all this with Iceland, which in 2013 experienced its first ever instance of police fatally shooting a citizen, even though Iceland ranks number fifteen in firearms ownership globally. Moreover, this violence disproportionately impacts certain communities. Police profiling fills intelligence databases with subjectively suspicious details which the Director of National Intelligence sought to amass, to forward “terrorist related” information to Fusion Centers, without reasonable suspicion. The ACLU notes instances of law enforcement or federal agencies targeting particularly people of color and Muslims, on the basis of “suspicious” but legal behavior, such innocuous activities as taking pictures or measurements, or expressing speech, such as criticizing FBI policy.

Police operations disproportionately target communities of color beyond just surveillance too. African-Americans comprise 13 percent of the U.S. population, but, per the ACLU, 39 percent of SWAT deployments in 2011–2012 targeted them. A recent three-year study of nineteen thousand police use-of-force incidents revealed that police targeted African-Americans with violence 3.6 times as often as whites on average, consistently across weapon types, with or without arrest. As military weaponry advances, this implies a worrisome trajectory. America’s marginalized communities already pay the heaviest cost for this escalation.

Progressively, police use hardware, doctrine and tactics not just metaphorically similar to the military, but directly from them, incentivized by federal policies. The military increasingly assumes law-and-order functions, as surveillance and intelligence unify in ways over a century of separation protocols warned against. Militarized cops, with paramilitary raids and military surveillance systems, disproportionately damage marginalized groups and undermine civil liberties. They eviscerate public trust in police, polarize communities and provoke protesters. The United States must diminish its military involvement domestically, in its policing, because the leap from Mayberry to militarization may soon mean police with tanks and drones of war. At the end of the day, when more Americans die to those meant “to serve and protect” than to mass shootings, to war, to terrorism, we must realize: the time has come to disentangle the disastrous synthesis of crimefighter and warfighter.