How to Avoid a South China Sea Showdown 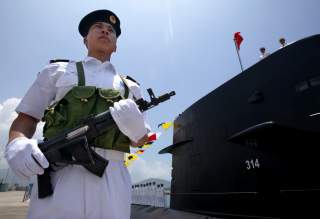 This essay was a runner up in the 2018 John Quincy Adams Society/TNI Student Foreign Policy Essay Contest.

It is imperative that the United States reduce its military involvement in East Asia as China rises to relieve its overstretched military and avoid conflagration with this rising power capable of challenging American hegemony. Although this idea is counterintuitive to those who would argue that American leadership in the region is necessary to contain China, the economic and geopolitical realities mean that the American strategy towards the Soviet Union in the Cold War is not reproducible with China. While there are parallels between the two great power rivalries, there are key differences between China today and the Soviet Union in the twentieth century that will make containment dangerous and ineffective this time. Instead, the United States ought to reduce its military presence in East Asia and let its allies develop independent nuclear deterrents to keep the region stable. Critics would argue this would create incentives for China to attack its proliferating neighbors leading to war and chaos, but the historical evidence suggests such an attack is highly unlikely.

The United States faces unique challenges in containing China that include an economic deficit, a discontinuous and non-united front, and other great powers. As a result, it cannot succeed with the strategy of containment used against the Soviet Union. Throughout the Cold War, the United States was well ahead of the Soviet Union in every relevant economic measure, and the gap only widened as the Cold War progressed. China today has already passed the United States in gross domestic product measured by purchasing power parity, and will continue to widen the gap in the decades to come. As time goes on, the United States’ current military advantage will erode making containment more and more difficult to maintain. American allies in the region will feel increasing pressure to bandwagon with China and there are already a number of countries dispersed throughout the region that have aligned themselves with China from Pakistan to Malaysia. This is not the united front of Western Europe, but a region divided in allegiance between the rising regional power and the declining global one. What’s more, the frontline of the Cold War in Western Europe was a narrow and clearly demarcated area, the border between East and West Germany. This small geographic land area that could be easily stationed by American troops. Containing China requires stationing troops from the 39th Parallel to the South China Sea and the disputed Chinese-Indian border. This poses serious strategic coordination problems and also increases military costs. Containing China would be a losing strategy that drains American resources, but if a withdrawal would create a vacuum and instability in the region, then it could be just as destructive to American foreign-policy goals.

By encouraging its allies to develop independent nuclear deterrents, America can ensure that China cannot take advantage of its withdrawal and the region will continue to be stable. The period since World War II has been characterized by the longest period of great-power peace in modern history as a result of the advent of nuclear weapons. The American nuclear umbrella provides an effective deterrent for its Asian allies, but under the proposed withdrawal the nuclear umbrella would be gone or at least questioned making independent nuclear deterrents necessary. South Korea, Japan, and even Taiwan have the capability to acquire nuclear weapons, but have avoided doing so because the United States provided security for them and the United States discouraged proliferation. Were they to develop their own nuclear deterrents it would keep the region stable without an American presence.

Well-known scholars of international relations, like Barry Posen, have advocated that such drawdowns are in the United States’ long-term interest. Posen envisions a world where U.S. allies would defend themselves without the United States through independent nuclear deterrents. Critics of this view point to the risk of preventive war arising during the transition period. This begs the very important question: is there a serious risk of China, the rising power in East Asia, attacking Japan, South Korea, or Taiwan if they attempt to acquire nuclear weapons? An examination of the history of preventive strikes against nuclear programs will show that such a scenario is unlikely. A carefully executed drawdown of U.S. commitments would not create incentives for preventive war against United States allies that would destabilize the region.

The most well-documented case of a preventive strike against a nuclear program is Israel’s attack against the Osiraq nuclear reactor in Iraq in 1981. Israeli leaders worried that like Israel, Iraq would finish its nuclear weapons program faster than predicted. The Iraqi regime posed a special threat since it regularly threatened the destruction of Israel and seemed intent on becoming a regional hegemon. Since Israel is geographically small and very close to Iraq, a nuclear Iraq was an existential threat. Even still, the Israeli government was very conflicted in its decision to bomb the Osiraq reactor. International backlash from world powers and Arab neighbors was a grave concern. It was only Iraq’s uniquely vulnerable position during the Iran-Iraq war and Israel’s alliance with the world’s foremost superpower, the United States, that gave Israeli leaders the confidence to eventually attack the reactor at Osiraq.

When the United States chose not to attack China’s nuclear program in the 1960s it was faced with less of a threat and higher potential costs when compared to Israel’s decision not to attack Iraq. The United States government was initially quite worried about Chinese proliferation, but quickly came to realize that it threatened only to limit freedom of action in East Asia and it would be decades before Chinese missiles could even reach the United States. In addition to the obvious distinction that the United States’ large land area makes it more resilient to nuclear attack, China would remain at a military disadvantage relative to the United States, making a first-strike “highly unlikely” in the minds of United States military leaders. Attacking China’s nuclear program was not as simple as one bombing run against a sole nuclear reactor. There were numerous reactors and the location of them was not known within “any very high degree of confidence.” If they had been known, destruction was not guaranteed, and were they destroyed, it would at most delay China’s nuclear program for a few years. Additionally, preventing Chinese retaliation after attacking its nuclear facilities would involve a huge force commitment to East Asia, and it was hard to conceive of a scenario in which the Soviet Union did not intervene. Altogether, this meant a strike could worsen the United States’ strategic position and at best delay China’s nuclear ambitions.

Between these two cases, Japan, South Korea and Taiwan’s position relative to China more closely resembles China’s position relative to the United States in the early 1960s. Japan, South Korea and Taiwan have no interest in, or chance of, establishing hegemony in East Asia. Although China is geographically close, its size and military advantages mean that if any one of China’s regional adversaries acquired nuclear weapons it would limit freedom of action, not threaten its existence. China would also have to worry about a preventive strike bringing a withdrawn United States back into the region, much as the United States worried about its main rival, the Soviet Union, becoming involved in any attack against China. Finally, all three states have substantial civilian nuclear programs spread throughout the country, which makes stopping a nuclear program more difficult, costly, and prone to retaliation. The Israeli strike against Osiraq was an extraordinary case, which is unlikely to be repeated in Asia, especially since it revealed the impermanence of striking nuclear facilities when Iraq simply redoubled its efforts to acquire a nuclear weapon in the following years. Whether American allies in East Asia will proliferate remains to be seen, but if they did, history suggests China would not opt for the military option. With the greatest threat to peace in an Asia absent the United States being highly unlikely to occur given the historical evidence a drawdown could be safely undertaken. This would give the United States much needed resources to invest in its own economy and would also give China the breathing room to rise peacefully, which reduces the risk of miscalculation or accidental war.

Samuel Leiter is a senior at the University of Chicago studying political science with a focus on nuclear proliferation and preventive war. In July he will start working as an analyst for the Civic Consulting Alliance, a non-profit that helps Chicago’s government govern better.