How The Church Won Montenegro’s Elections 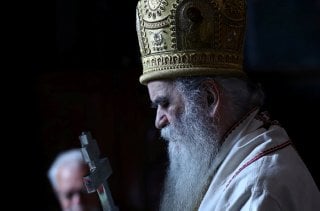 The parliamentary elections in Montenegro brought the first and historic change last month. The Democratic Party of Socialists (DPS) has ruled continuously since the first post-communist elections (1990) while going through various phases of ideological transformations and adjustments. Despite frequent and serious accusations of corruption, kleptocracy, the effect of the captured state, etc. it had the open support of Western countries. Its leader, Milo Djukanovic, achieved a convincing victory (53.9 percent of the vote) in the first round of the 2018 presidential election, which gave him confidence to proclaim a renewal of the Montenegrin Orthodox Church as one of the main principles in the new DPS party program.

However, at the end of 2019, the government of Montenegro initiated the adoption of the Law on Freedom of Religion or Beliefs and the Legal Status of Religious Communities, with the aim of (re)nationalization of the OCM’s property, through administrative procedures instead of court proceedings. In this way, DPS wanted to subordinate the OCM to the state and force its dignitaries to enter the process of restoring autocephaly and separate from the Serbian Orthodox Church, following the example of the Orthodox Church in Ukraine (whose autocephaly was partially recognized in 2019). Djukanovic even stated on several occasions that if OCM refused to be a part of such a solution, a new church “for Orthodox Montenegrins” would be formed. However, OCM rejected such ideas and started protests (in the form of religious processions called Litiyás) against the disputed law, assessing it as unconstitutional and discriminatory. Tens of thousands of people of different political preferences had consistently protested against the controversial law every week, since the beginning of 2020 until the escalation of the coronavirus pandemic, after which public gatherings were banned.

Nevertheless, the negotiations between the government and the church on amending and enforcing the law began in March. However, after the first meeting, the government postponed the continuation of negotiations for four months. This caused strong dissatisfaction within the church, which demanded the withdrawal or amendment of the disputed law. In that sense, the OCM’s Metropolitan Amfilohije publicly invited the citizens not to vote for the ruling parties in the upcoming elections, announcing the continuation of the Litiyás. Following this statement, unofficial opinion polls showed a dramatic change and a sharp drop of DPS in ratings. The government soon initiated the resumption of negotiations with OCM in July, offering significant concessions, including amending of the disputed articles but asked the OCM only to register in accordance with the new law. The church rejected this offer, arguing that its contemporary registration would mean the loss of its historical and legal continuity.

One week before the elections, Metropolitan Amfilohije addressed the public again and called on all Montenegrin citizens to go to the polls and vote against the ruling parties. The OCM justified its open interference in the electoral process with the example of the 1948 election in Italy, when the Roman Catholic Church openly supported Christian Democrats versus the left-wing coalition. Although all public opinion polls, before Metropolitan’s statement, which showed that the turnout in the elections would be between 66 and 68 percent, something unexpected happened: as many as 76 percent of voters went to the polls on August 30.

The DPS won 35 percent, and its “traditional coalition partners” close to 14 percent of the vote. However, the three opposition coalitions (For the Future of Montenegro, Peace is Our Nation, Black on White) won over 50 percent of the vote, which secured them a narrow majority in parliament.

The head of the coalition is a pro-Western and Christian Democratic oriented professor named Zdravko Krivokapic, who is also a new majority’s candidate for the prime minister. However, the backbone of this group is mostly pro-Serbian, conservative coalition Democratic Front. Although its member, the Movement for Changes, has formed a separate parliamentary club, with a pro-NATO and pro-EU platform, the two remaining constituents of the coalition (New Serb Democracy and Democratic People’s Party) are openly Russophilic and strongly influenced by the Serbian president Aleksandar Vucic. For these reasons, their leaders are targeted as undesirable in sensitive positions in the government, especially in defense and security departments.

The Peace is Our Nation coalition is led by the pro-European and catch-all party, Democratic Montenegro. Its leader, Aleksa Becic, was recently elected as a speaker of the Montenegrin parliament. The Black on White coalition is led by the pro-European and green party United Reform Action (URA) and its progressive leader Dritan Abazovic. The leaders of the three coalitions signed a promising agreement that Montenegro will not change its foreign policy principles, including its pro-EU and pro-NATO orientation. They also called for minority parties (mostly Bosniak and Albanian) to enter the new government.

On the other hand, the Democratic Party of Socialists, although responsible for Montenegro's long-standing pro-Western course, has produced a number of serious affairs related to political corruption. DPS also showed overt unwillingness for electoral and judicial reforms. That is why Freedom House has recently marked Montenegro as a “Hybrid Regime” for the first time since 2003. The conflict with the church, as the most influential religious institution in the country, dealt a final blow to the DPS.

The Orthodox Church in Montenegro has already played a crucial role in two turning political points in the contemporary history of the small Mediterranean country. In 1997, OCM supported the pro-Western-oriented Djukanovic against the pro-Milosevic-oriented candidate Momir Bulatovic, which significantly contributed to Djukanovic's victory. Also, in the time of the Montenegrin independence referendum (2006), despite its preference for preserving a state union with Serbia, the OCM was neutral and did not interfere.

Its leader Metropolitan Amfilohije, in spite of his anti-NATO discourse and occasional EU-skepticism, supported the aforementioned agreement between the leaders of the three coalitions on the pro-EU and pro-NATO orientation of the future government. It is interesting to mention that, as a moderate ecumenist and erstwhile Greek student, he played a crucial role for the Serbian Orthodox Church regarding taking part in the Pan-Orthodox Council of Crete (2016), which was strongly opposed by the Russian Orthodox Church. Although his statements are usually harsh and controversial, he recently showed an enviable dose of pragmatism and openness to cooperation with Western political factors.

Finally, it should be emphasized that secularism is one of the basic principles of modern civilization, which can be threatened by both the state and the church. OCM indeed previously questioned the secular order of the society, (but only declaratively) through interference in the political issues, most often through the criticism of foreign policy of the government. On the other hand, the (former) ruling elite seriously violated the principle of secularism by announcing the formation of a new Orthodox church and by trying to nationalize the church property with a controversial law, which, at the same time, ultimately relativized one of the basic human rights: the right to property.

And so, this backlash occurred.

Nikola Zečević is a teaching fellow at the University of Donja Gorica in Podgorica, Montenegro.