How Macedonia Could Push NATO into a War 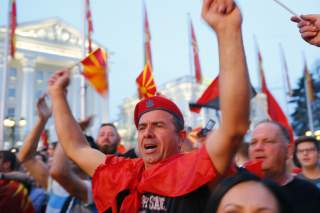 When Fox News host Tucker Carlson asked Donald Trump last month why he should send his son to die defending Montenegro, NATO’s newest member, the president seemed to repudiate his own administration’s policy. He indicated that Americans shouldn’t be willing to sacrifice their lives for such a trivial ally. Furthermore, he warned that Montenegro “has very aggressive people. They may get aggressive, and congratulations, you’re in World War III.” As Cato Institute senior fellow Doug Bandow pointed out, Trump’s comment was odd on two counts. First, the Senate approved the admission of Montenegro on his watch in March 2017. If he thought that latest episode of adding a useless microstate to the Alliance was unwise, he could have withdrawn the treaty from consideration before the Senate vote. Second, as Bandow notes archly, that while “it is theoretically possible that the vast, aggressive, powerful Montenegrin legions might launch themselves towards Moscow,” it isn’t too likely, because Montenegrin leaders “do not appear to have entirely lost their minds.”

Indeed, the scenario that a small Balkan NATO partner might trigger a war that entangles the United States is unlikely to entail a direct provocation of Russia. That reality has made it easy for Trump’s critics, here and abroad, to mock his comment about Montenegro triggering a world war. A far greater risk is that the tripwire would be a conflict in which an alliance member became embroiled with one of its regional neighbors. Montenegro actually is less of a danger in that respect than NATO’s latest invitee, Macedonia. Montenegro seems on relatively good terms with neighboring states, although it has been involved in an extended border dispute with Kosovo that was resolved just recently when the Kosovo parliament passed bitterly resisted legislation approving a settlement of the controversy.

Macedonia is on much worse terms with Kosovo and that country’s ethnic brethren in Albania. Officials and the populations of both countries have long pursued a “Greater Albania” agenda that lays claim to swaths of territory in Serbia, Montenegro, and especially Macedonia. The NATO-assisted severing of Kosovo from Serbia in 1999 was the first major triumph for that agenda, and Greater Albanian expansionists wasted no time in trying to follow up on their victory. Within months, portions of Macedonia in which ethnic Albanians constituted a majority (or in some cases, just a plurality) of the population sought to destabilize that country, demanding extensive autonomy for those provinces. Both the United States and its NATO allies put intense pressure on Macedonia’s government to grant the demanded concessions, and Skopje reluctantly complied.

Tensions then subsided for a while, but Albanian separatist sentiments continued to fester and grow. In the past few years, a new crisis has emerged, with Albanian activists leading large anti-government demonstrations. Skopje’s relations with both Albania and Kosovo are deteriorating markedly. In April 2017, Macedonia’s foreign ministry formally accused Albania of interfering in the country’s internal political affairs. A month earlier Macedonia’s president charged that the demands of the Albanian minority was the biggest threat to his nation’s sovereignty and unity.

Washington and other Western capitals continue to press the Macedonian government to make concessions to the country’s Albanian minority beyond those granted under outside pressure during the 2001 crisis. That pressure is creating major splits within the Macedonian ethnic majority. An especially ugly confrontation between Macedonian nationalists and more accommodating elements erupted in the spring of 2017. Pieter Feith, a former European Union envoy to Skopje, warned the nationalists that they were “playing with fire” if they continued to resist relinquishing power to a moderate successor government. Soon thereafter, the nationalists gave way.

Divisive issues continue to roil the country, however. The demands of the Albanian faction for ever-greater autonomy keep escalating, and that has caused the president and other officials to balk at making further concessions. President Gjorge Ivanov has dug in his heels on one key issue, repeatedly refusing to sign a language law that would formally recognize Albanian as the primary language in certain regions of the country. He and his supporters fear that such a new concession would simply whet the appetite of Albanian secessionists

The drive for a Greater Albania is gaining new momentum, and that creates major problems for a prospective NATO member. The parallels to events leading up to Kosovo’s secessionist war against Serbia in the 1990s and NATO’s military intervention are more than a little unsettling. What happens once Macedonia joins NATO, if the Albanian secessionist drive does not ease but accelerates and Skopje takes action against Albania and/or Kosovo to prevent outside assistance to the rebellion, claiming that those countries have committed aggression? It is hardly a remote possibility that the United States as NATO’s leader could be drawn into such a nasty conflict.

That possibility underscores the folly of America pushing to add strategically and economically irrelevant microstates to the alliance. They are not strategic assets in any reasonable definition of the term. Instead, they are strategic liabilities and potential snares. Granted, members like Macedonia and Montenegro are not likely to involve the United States in a world war—unlike the three Baltic republics, which could certainly do so, given their frosty relations with Russia. The situation in the Balkans is not akin to the one that existed on the eve of World War I and plunged Europe (and ultimately America) into that catastrophe. But a needless entanglement even in a petty, limited armed conflict is one entanglement too many. President Trump should act on the instincts he displayed during his interview with Tucker Carlson and make it clear that the United States will not approve NATO membership for Macedonia or any other applicant.

Image: Supporters of opposition party VMRO-DPMNE take part in a protest over compromise solution in Macedonia's dispute with Greece over the country's name in Skopje, Macedonia, June 2, 2018. REUTERS/Ognen Teofilovski