How to Talk About Nuclear Weapons 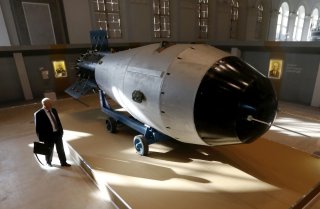 It’s a truism of the nuclear field that arms control advocates don’t always win the war of words with their opponents, said Lynn Fahselt, co-founder and executive director of the communications organization ReThink Media.

“The first media audit we did showed that, on the opinion pages, we were being beat three to one,” she said in an interview with the podcast, Press The Button. “For every one argument we made for arms control and disarmament, our opposition was making two and calling ours naive.”

At first glance, this editorial record might seem like a minor datapoint in the grand scheme of nuclear politics. But in a fast-moving democracy whose attention span is only as long as the shortest news cycle, wins in the court of public opinion—even small ones—can affect government policy in real ways.

For instance, arms control groups can occasionally influence nuclear-related legislation. But these victories, when unrecognized by the American public, can prove frustratingly fleeting. Any language, once placed in a draft bill, “can just as quickly be taken out if you don’t have a powerful constituency to back it up.”

It goes without saying, then, that building that constituency is a sine qua non of arms control. And this, according to Fahselt, is best accomplished by effective communication. In short, talking to people about nuclear policy—and making them care.

A task easier said than done for many arms control experts in Washington, who often fall into a unique rhetorical trap. Aware of their privileged status and wanting to protect their own reputation for objectivity, arms control specialists tend to coach their language in the cold technicality of nuclear expertise rather than the hot passion of nuclear advocacy. They become, in Fahselt’s words, “stuck in neutral.”

“All of a sudden it feels like we’re only there to give facts, answer questions, and give context,” said Fahselt. “And so that means that all of our quotes get coded as neutral versus positively advocating and offering solutions to the public on a scary topic.”

Though perfectly suited for Beltway think tank conferences, this insistence on impartiality does little to excite everyday Americans. In fact, it may do the opposite. “Unless they feel there’s a solution and that we have a way forward,” said Fahselt, the nuclear conversation often “shuts people down.”

But talking about solutions alone isn’t always enough to make people care. After all, nuclear policy debates, for all their ideological vigor, are mostly abstract—their consequences hidden away aboard submarines or tucked into silos safely out of sight.

To Fahselt, this is a problem of linkage. “It’s probably overly apparent, but our issues have to be connected to what’s happening around us,” she explained. “They have to feel relevant to those communities.”

She pointed to the ongoing domestic unrest and economic uncertainty as an example. What is seeing police riding into town on armored vehicles, she asked, but to witness the byproducts of American militarism, of which nuclear weapons are the ultimate embodiment? And what to make of Washington’s commitment to fully fund new nuclear weapons over the next thirty years while simultaneously letting extra unemployment benefits expire after a handful of months?

“They’re very much connected,” said Fahselt. “It’s our job to figure out what those conversations need to look like so that people see the larger arms control work as meaningfully connected to things that they’re seeing everyday.”

As vital as those connections are, just as important is who is making them. “The messenger matters,” she said. “We reach audiences by having those audiences as part of our movement—as our leaders, our policymakers, our researchers, our spokespeople.”

Particular attention should be paid to the racial and gender gaps latent in the nuclear field, argued Fahselt. “Fifty percent of our constituency are women, and eighty percent of our spokespeople are men. So, if we really want to reflect and build a powerful, potent movement on nuclear issues, we have to reflect the audiences we are trying to reach.”

Already there is progress. When Fahselt started, female directors were rare. Now, she is one of many. She attributes this shift to a rising and diverse generation of arms control advocates, who, having found their own connection to the issue, are building the nuclear constituency of tomorrow.

This, of course, proves her original point. “We go to become experts on something we care about,” she said. “But we have to care about it first.”

The entire interview with Lynn Fahselt of ReThink Media is available here on Press The Button.