How Trump’s Constant Attacks on China over Coronavirus Won't Help 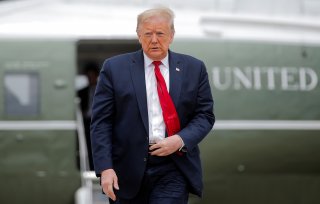 For seventy years, one of the greatest sources of American power has been the country's willingness to take the moral high ground during crises. The United States has the most influence and power when it is seen as a force for good in the world—meaning the global public goods it provides are not only ethical but also politically astute. Today, however, the ongoing blame game both internationally and domestically over coronavirus and its origins threatens to miss a historic opportunity for America to do well by doing good.

Since the outbreak of the pandemic, China and the United States have accused each other of unleashing it. President Donald Trump called coronavirus “the Chinese virus,” and China’s foreign ministry spokesperson claimed the U.S. Army planted it in Wuhan. China is now working to recast itself as the innocent victim that tried to warn the world about the virus but has been unfairly blamed for it. Meanwhile at home, Democrats and Republicans are competing to prove who's toughest on China.

All this flying mud has created a vicious cycle that precludes even opportunistic cooperation with China on important issues of mutual concern. Even at the height of the Cold War, the United States and the Soviet Union were able to work together in the fights against polio and smallpox. Today, by contrast, instead of joining Europe in the fight, the United States, like Russia, was missing from a recent EU-hosted meeting among countries seeking to pool billions of dollars to find a vaccine.

Washington has also been absent from a much-needed global inquiry into the origins of coronavirus that is being spearheaded by Australia, and instead is conducting its own unilateral investigation into the virus’s origins. Without the United States, several smaller, middle powers—Austria, Denmark, Greece, Israel, Singapore, and New Zealand—are carrying the weight and holding weekly calls and sharing best practices with Asian partners including Japan, India, South Korea, and Vietnam.

But America can still flip the script and seize this historic opportunity for global leadership. But that means getting in the game and being both a leader and a teammate. Rather than whining and finger-pointing like a sullen child, the United States could distinguish itself by returning to the high road and promoting unity, solidarity, and global cooperation. In practice, this strategy means the United States should expand its special relationships with the UK and Japan and build one with India, double down on NATO, invest in the promises of collective Asian security that the Quadrilateral Security Dialogue (“the Quad”) offers, and build out the Five Eyes intelligence-sharing platform as well as the Five Power Defense Arrangement, involving the UK, Australia, New Zealand, Malaysia and Singapore.

Rather than sing the same sad song about the source of coronavirus, the United States needs to lead a choir of nations in a hymn about how this pandemic, like SARS before it, was made possible by the lack of transparency intrinsic to China’s national socialist political system. It is only through collaboration among democracies can the United States seize the day and create what the world desperately needs: a muscular coalition of like-minded nations that will prevail in this crisis, as well as secure the future of free markets and liberal values in its aftermath.

Joshua Eisenman is an associate professor at the Keough School of Global Affairs at the University of Notre Dame. Devin Stewart is a senior fellow at Carnegie Council for Ethics in International Affairs in New York City.