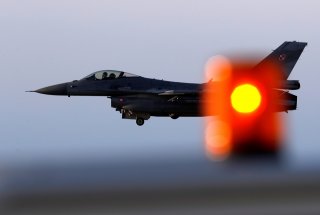 With the world in the grip of a pandemic and impeachment now a distant memory, the issue of security assistance to Ukraine has unsurprisingly disappeared from the national discourse.

But Washington’s armament of that country, and Eastern Europe more broadly, continues apace: over the past few years, the United States has conducted or approved the transfer of tens of billions of dollars’ worth of high-tech military equipment to the region.

Most of this has occurred through the mechanism of Foreign Military Sales, and since 2018, almost every country between Germany and Russia has inked deals for major U.S. weapons systems. Outside of the infamous $391 million aid package to Ukraine, Poland has signed deals for F-35 stealth fighters, the PATRIOT missile defense system, the High Mobility Artillery Rocket System (HIMARS), and Javelin anti-tank missiles; Slovakia and Bulgaria have initiated F-16 buys; the Czech Republic, Latvia, and Lithuania have started procuring Black Hawk helicopters; Romania has purchased HIMARS and additional PATRIOT systems; and Slovenia, Lithuania, and Montenegro have bought the Humvee-replacing Joint Light Tactical Vehicle.

Considered as a whole, these military sales constitute the most significant infusion of arms into the region since the end of the Cold War. Yet they have attracted little scrutiny or discussion.

The rationale of proponents is that sales bolster the capabilities of allies, which deters Russian aggression in a strategic and contested area while lowering the direct costs to the U.S. military. Security assistance allows the U.S. to “maintain pressure on Russia, which continues to undermine the rules-based international order,” per a State Department explainer. In the cruder summation of Rep. Adam Schiff, the U.S. provides weapons to our partners “so that we can fight Russia over there, and we don't have to fight Russia here.”

But if the goal is to preserve a stable peace in Europe, the impacts of these arms transfers are much more dubious.

At the most basic level, flooding an already tense region with weaponry makes a crisis much more likely. Seeing its rivals acquire significant new capabilities will lead Russia to dial up its defense investments, in turn creating more pressure for the U.S. and its allies to continue their buildups. Once they really get going, arms races are very difficult to stop—and the evidence suggests that piling up weapons significantly increases the probability they will be used.

Arms exports can also reduce our ability to manage the geopolitical situation. The antagonisms between our Eastern European partners and Moscow, however justified, reflect interests which are distinct and often divergent from those of the United States (consider, for example, the recent dispute between Poland and Russia over the historiography of World War II). By dramatically augmenting the military capabilities of these countries, Washington both empowers them to pursue regional goals more assertively and suggests these moves will receive ongoing U.S. support. Particularly in the case of a non-NATO partner like Ukraine, such commitments are not wise to make or keep.

The scholarship also suggests that a changing balance of power creates a greater risk of conflict.

There has been much analysis of the so-called ‘Thucydides Trap’—in which a declining hegemon seeks to prevent, by force, the rise of a rival—as it applies to the U.S.-China relationship. But similar conditions exist in Eastern Europe. Russia is no match for NATO, but it currently occupies a position of strategic pre-eminence near its borders; it is a nuclear superpower, fields a powerful conventional military, dwarfs the economies and populations of most of its neighbors, and maintains a considerable sphere of influence. At the same time, the country’s population is decreasing, and its economy lacks the size or dynamism to bankroll anything resembling the global presence of the former Soviet Union.

Though its predominance in the region will remain a fact over the near to mid-term, the gap separating Russian power from that of its neighbors is narrowing. Taken in the aggregate, both the bigger purchases (like Polish acquisition of fifth-generation fighters) and the smaller ones (like Baltic acquisition of Black Hawks) are eroding Russia’s strategic edge faster than anticipated. This is, of course, the goal of U.S. security assistance, and advocates contend it deters aggression and so makes conflict less likely. But if Moscow concludes it can’t reverse this relative decline while neighbors are signaling they’re preparing for a fight, it will be tempting to ratchet up kinetic activities while the conventional military advantage remains as wide as possible.

This kind of thinking, it should be recalled, was a considerable factor in the lead-up to the First World War: worried that every passing year strengthened Russia’s position at the expense of their own, German strategic planners urged an offensive war while they retained the upper hand.

Decades of uncontested primacy has left the U.S. unprepared for the subtleties and high stakes of great power politics. Given the imperative of managing our relationship with Russia, and the finesse required to do so, massive arms transfers may not be the most productive policy decision. Instead, we should keep our eyes on the long game and work toward a stable modus vivendi. Careful thought should be given to second-order effects, as well as the view from Moscow. This doesn’t mean abandoning allies, but neither does it mean writing blank checks.

The U.S. should cast aside the mentality that introducing advanced weaponry into the region is always stabilizing—and consider how imprudently managed security assistance can increase the risk of unintentional conflict, reduce its strategic control of the situation, and provoke potentially destabilizing responses.

Luke Nicastro is a defense analyst and writer based in Washington, D.C.