How the U.S. Should Leave Afghanistan 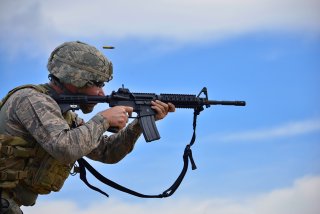 While on a recent foreign trip, Secretary of State Mike Pompeo met with the Taliban negotiating team in Doha, discussing a potential ceasefire and political settlement between the militants and the U.S.-backed government in Kabul. The efforts at intra-Afghan peace talks have, generously speaking, sputtered. But no matter how these talks do or don’t progress, it is long past time for the United States to leave Afghanistan.

Unfortunately, each time an administration gets close to leaving, influential voices give reasons given for why it can’t leave. The first and most difficult is that the United States can’t trust the Taliban to abide by any agreement it signs: if the Taliban have a choice between answering to God or answering to the international community, they’ll choose God. All other reasons given fall away from there; but the critical issue is that once the Taliban back away from whatever they agree to in the short term, Afghanistan will return to the status quo antebellum.

That means four things: first, an unencumbered trade in opium; second, expanded space for domestic and foreign jihadists to train to kill ‘crusaders;’ third, the painstaking reconstitution of Afghan women’s rights (human rights in general, actually) achieved over the past twenty years will collapse; and finally, Afghans who have profited from the U.S. intervention (and many others) will flee with their families, adding to the toll of refugee reactions shifting politics to the political right in host countries.

All four are certainties, which means that in the final accounting the United States and its allies will have suffered fantastic costs in blood and treasure for little achieved. The Vietnam end game is worth recalling in this particular respect: by 1968 the United States understood there was no way to win, but no U.S. president wanted to helm an administration that “lost” Vietnam.

But now, after nearly twenty years in Afghanistan, the United States and its long-suffering allies need to admit defeat and leave: we lost.

In order to get that done it is worth admitting that the underlying argument for staying after the destruction of the Taliban in 2002 was just plain wrong. The Bush administration erred when it shifted the traditional U.S. intervention algorithm from a Swiss Army knife approach (multiple tools working in tandem) to a disproportionately offensive military response (a big sword against shadowy warriors who hide amongst civilians), attacking ‘over there’ rather than defending here. That shift was understandable as an emotional overreaction to attacks of 9/11, and in Bush’s defense, that reaction was widely popular at the start. This is no longer the case: upwards of 7 in 10 veterans and their families support a full withdrawal of U.S. forces.

But today we need to reach for some version of peace with honor. This is doable, even with the Taliban, and shift to homeland defense in collaboration with our allies. The Taliban of today may reach an agreement that protects Afghan women, works to reduce the scourge of opium-to-heroin production and addiction, and refuses to accept the presence of foreign jihadis on Afghan territory. As in the Vietnam and Soviet peace deals, this would enable the United States to say it departed with honor, and that its intervention had not been in vain. Then, about two years later, when the new Taliban reneges on the agreement, and Afghanistan returns to the status quo, we can say that wasn’t our fault. Once again, the Russian Federation will have to shoulder the burden of defending against the scourge of a Taliban-governed Afghanistan. However, withdrawal does equate to complacency. We do have tools other than military might in our arsenal to deal with a Taliban-led Afghan government that will want recognition, including continued diplomatic efforts and sanctions.

As to homeland defense, that’s do-able too. Recall that in 2015, as the United States and its allies tightened the noose around ISIL, Europe suffered a devastating series of ISIL terror attacks resulting from serious intelligence and intelligence sharing failures. But since then, the United States and its European allies have made great strides in the use of new methods and technologies to dramatically reduce the risks of the kinds of terror attacks that might arise from the return of Afghan territory to terrorist training habitat. We cannot defend against everything, but the costs of attempting to fight terrorism abroad have already been shown to be prohibitively counterproductive and unpopular.

Leaving is going to hurt, no question. But the hurt we may suffer from leaving is far less than the hurt we and the Afghan people are certain to sustain if we refuse to face reality and continue to preside over a broken military intervention. There are alternatives to military force, let’s use them.

Monica Duffy Toft is a professor of international politics at The Fletcher School at Tufts University and the director of Fletcher’s Center for Strategic Studies. Her research focuses on U.S. military interventions abroad from 1776 to 2017, and measuring the unintended consequences of those interventions. Her latest book is People Changing Places.