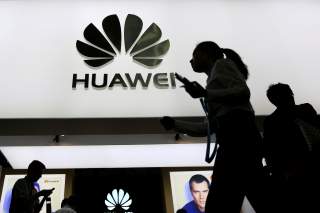 The Huawei saga has served to illustrate that, just as Beijing and Washington are crafting two stark political alternatives for the world to consider, they are doing the same in the technology and communications arena. China and the United States are in the middle of trade and national security battles, but they are also jostling to determine who will control the future of technology and communications. The Huawei dispute is as much about who has access to and—thus controls—the data of the future, as it is about superpower politics and the rule of law.

Huawei is the world’s largest supplier of telecommunications network equipment and second-biggest maker of smartphones. Unlike other big Chinese technology firms, it does much of its business overseas and is a market leader in many countries across Europe, Asia and Africa.

5G is the next generation of wireless networks that promises to be 100 times faster and more reliable than current technology. It is a market that will be worth hundreds of billions of dollars, as 5G will require compatible new phones and communications equipment. Huawei has already built up such a strong lead in 5G technology that it is already practically irreplaceable for many wireless carriers.

This presents a challenge for the United States and many other countries around the world.

To put America’s national security concerns vis-à-vis Chinese technology into context, consider that in 1999 two colonels in the People’s Liberation Army (PLA) published the book Unrestricted Warfare, which has been influential. The first rule of unrestricted warfare is that there are no rules and nothing is forbidden. The book advocates tactics known as shashou-jian (Assassin’s Mace), the concept of taking advantage of an adversary’s seemingly superior conventional capabilities by “fighting the fight that fits one’s own weapons” and “making the weapons to fit the fight.” It proposed ignoring traditional rules of conflict and advocates such tactics as manipulating foreign media, controlling the markets for natural resources, and engaging in cyber warfare.

Although Huawei describes itself as privately held and employee-owned, the truth about its ownership structure is generally unknown outside of government circles. Many believe the company is Chinese state-owned and has deep connections to Beijing’s intelligence services. Its founder was an engineer with the PLA. It is also worth pointing out that no Chinese company is fully independent of the government.

China’s 2015 National Security law requires any domestic firm to assist the government for national security purposes. Under it, every company operating in China is required to give Chinese authorities their source code, encryption keys, and backdoor access to their computer networks in China. In other words, businesses must now hand Chinese agents the lifeblood of their companies and products, while also giving the Chinese Communist Party (CCP) a free pass to spy on their networks. In 2017, China’s Cybersecurity Law went even further, giving the government unrestricted access to almost all data held by Chinese companies. The companies that hold data routinely obey government demands to access data. So, doing the math, whatever data Huawei has access to belongs to the CCP.

The Chinese government’s take no prisoners approach to the acquisition of data is hardly new. In the 1980s, China threatened to ban government procurement of Microsoft software, hardware, and technology unless Bill Gates agreed to provide China with a copy of its proprietary operating code, which, at the time, Gates had refused to reveal to Microsoft’s largest U.S. commercial clients.

After Gates agreed to provide it, China then copied the Cisco network router found on almost all U.S. networks and most Internet service providers. China then sold counterfeit routers at cut-rate discounts around the world. The buyers apparently included the Pentagon and a host of other U.S. federal agencies. A subsequent report by the Federal Bureau of Investigation concluded that the routers could be used by foreign intelligence agencies to take down networks and weaken cryptographic systems.

Armed with intimate knowledge of the flaws in Microsoft’s and Cisco’s software and hardware, China’s hackers may have the ability to stop most of the world’s networks from operating. Chinese networks would also have been vulnerable but, as part of its deal with Microsoft, the Chinese government modified the version of Microsoft software sold in China includes a unique security component using their own encryption. They also developed their own operating system (Kylin) and secure microprocessors for use on servers and Huawei routers.

Back in 2012, the U.S. House Intelligence Committee designated Huawei a state-controlled enterprise and wary of Chinese government tampering with the U.S. telecommunications supply chain. It was then that the Committee on Foreign Investment in the United States decided to block acquisitions, takeovers, or mergers involving Huawei and ZTE, given the perceived threat to U.S. national security interests. The U.S. government then decided that sensitive U.S. government systems should not include Huawei or ZTE equipment, including component parts. Government contractors—particularly those working on contracts for sensitive U.S. programs—were also ordered to exclude ZTE or Huawei equipment in their systems.

In 2017, ZTE pleaded guilty to conspiring to evade embargoes by selling U.S. equipment to Iran. The U.S. Commerce Department said ZTE subsequently violated the settlement and barred it from buying any U.S. components—which severely restricted many ZTE operations. The ban was then lifted at the behest of President Donald Trump in a concession to Chinese President Xi Jinping, which surprised and angered many in the U.S. government. However, the 2019 National Defense Authorization Act now bans U.S. federal agencies from buying Huawei products.

Given Washington’s concerns about potential national security implications of utilizing Huawei products, America has pushed for a ban on Huawei technology with its allies including the United Kingdom, Australia, Poland, the European Union, the Philippines and a number of other countries. Already security concerns have led Australia to completely ban the company’s technology and New Zealand has moved to partially restrict it. London said it could work around the issue and Berlin has refused to take the U.S. position on the subject.

But given what is known about Huawei, and how the Chinese government acquires data from Chinese companies, it is truly surprising that any Western government would willingly agree to utilize Huawei and other Chinese telecommunications products. What are they thinking?

This is not a game. The stakes are extremely high. This is about who controls the future. Washington wants a superior competitive position just as Beijing does, but only one country can reign supreme. China and Huawei have made it clear this is a race they intend to win. Will the rest of the world allow that to happen?

Daniel Wagner is CEO of Country Risk Solutions and author of the new book China Vision.