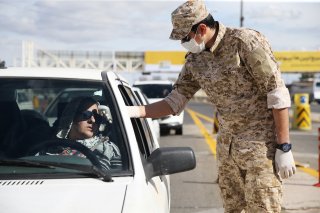 Iranian Speaker of parliament Ali Larijani was quarantined after testing positive for the novel coronavirus, the parliament’s public affairs office announced on Thursday.

Iran is facing the most serious coronavirus disease (COVID-19) outbreak in the Middle East, and over three thousand Iranians have died of the frightening new respiratory illness. Iranian authorities insist that they have the situation under control, but Larijani’s quarantine is another worrying sign for the country’s ability to contain the virus.

The office issued a statement on Thursday afternoon acknowledging that Larijani had tested positive for the coronavirus after several “respected deputies and colleges in Parliament” requested Larjiani’s presence.

He had attended anti-biological warfare drills last week with the Revolutionary Guards, and argued that Iran is “ahead of many countries in the world in dealing with the coronavirus.”

“In [some] major European countries with advanced facilities, we are witnessing that these countries have faced many problems in countering the virus, and the Americans do not care about the problems either,” the speaker of parliament said. “We see how troubled they are in the fight against the coronavirus”

Larijani is a powerful Conservative ally to President Hassan Rouhani, whose coalition of Reformists and moderate Conservatives faces a tough uphill battle in next year’s elections. Other members of the Larijani family occupy important positions, including head of the judiciary, advisor to the unelected Supreme Leader, and head of the Free Islamic University of Iran.

Rouhani had attempted to paint a rosy picture of the situation at a Wednesday video meeting of his cabinet.

“Fortunately, the statistics in all the provinces that I read last night were trending downwards. It was pleasing to me that the path our doctors, experts, and people chose was the right path,” he said. “We commandeered all the capacities of the armed forces in order to set up 4,000 hospital beds, and—thank God—they are all empty.”

But his health minister, Saeed Namaki, warned against overconfidence.

“An epidemic is like a wrestling match. In the ninetieth minute, you think you have the points to throw down your enemy. With a little relaxation, your enemy can throw you,” he said. “Our request is that you do not become afflicted with carelessness and overconfidence. We are at the stage of managing the disease, not controlling the disease.”