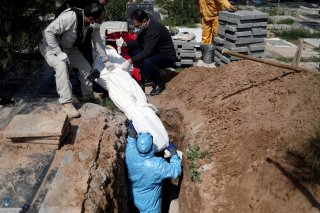 Iranian government spokesperson Ali Rabiei announced on Wednesday that Iran will accept aid from Doctors Without Borders, reversing course on a decision to reject the humanitarian group the day before.

The French medical organization had agreed to deploy a mobile hospital in Isfahan to help deal with the novel coronavirus disease (COVID-19) pandemic, which has killed over twenty-two hundred Iranians. But a mix of nationalist pride and conspiracy theories has made foreign aid into a political football in Iran, leading to bureaucratic wrangling over the humanitarian aid.

“While thanking Doctors Without Borders, there is really no need for hospital beds set up by foreign forces, with the execution of the National Coronavirus Mobilization Plan and the use of the full capacity of the [Iranian] armed forces,” Health Ministry advisor Alireza Vahabzadeh announced on social media on Tuesday.

Doctors Without Borders expressed “incomprehension” at Vahabzadeh’s decision in a Wednesday statement.

“This announcement came after two cargo planes we chartered, containing all the material needed to build a 50-bed inflatable treatment unit, had already landed in Tehran on Sunday and Monday,” the organization stated. “A nine-person international team including two intensive care unit specialists had already arrived in Isfahan where they were positively welcomed by the local health authorities.”

U.S. Secretary of State Mike Pompeo took the opportunity to slam Iran, which had previously rejected an offer of direct U.S. aid.

“The Iranian regime kicked out Doctors Without Borders…which was setting up a field hospital for Iran’s most vulnerable coronavirus patients,” he wrote in a social media post. “The regime’s longest-suffering victims are its own people.”

Doctors Without Borders shot back that “U.S. sanctions are also detrimental to the health of people in Iran.”

“Our policy is this: we will accept any entity that wants to help with any amount,” Rabiei said. “Despite the fact that there is currently no shortage from the perspective of hospital beds…their donated equipment will be used in areas required by the Health Ministry.”

The bureaucratic spat seemed to be an outgrowth of rhetoric spread by the country’s top leadership. Ayatollah Ali Khamenei, the religious cleric who serves as Iran’s unelected Supreme Leader, cited a conspiracy theory initially spread by the Chinese government blaming the U.S. government for creating the novel coronavirus.

“You might send people as doctors and therapists, maybe they would want to come here and see the effect of the poison they have produced in person,” Khamenei said in his Persian New Years Speech on March 21. "Possibly your medicine is a way to spread the virus more.”

Conservatives opposed to foreign engagement seized on Khamenei’s speech to agitate against the Doctors Without Borders presence.

“America knows that it has no place in Iran and its presence is impossible, but has France not always been associated with American conspiracies against Islamic Iran?” said Hossein Shari’atmadari, editor-in-chief of the Conservative mouthpiece Kayhan, in an interview with Fars New Agency. “No terrorist group and no enemy of Iran can be named that does not have an office and a headquarters in France!”

“And our country and the medical personnel of our country—with apologies—put on a tired, helpless face!” he added.

“Extremists’ sensitivity to the presence of Doctors Without Borders is not, contrary to their claims, because of fears of a biological warfare plot,” Mahmud Sadeqi, a member of parliament from the Reformist faction, wrote on social media. “Their concern is this: that international cooperation will put a crack in the sanctions wall.”