The Islamic State Was a Sham 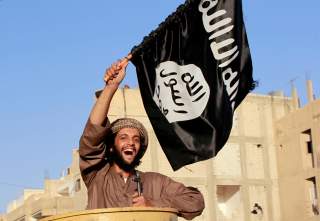 As a conventional army, the Islamic State is a spent force. The group that once lorded over eight million people across a section of Iraq and Syria about the side of the United Kingdom is now a collection of exhausted, dirty, smelly, and tired jihadists encased in a square mile of dusty tents and wailing children. Some are repentant, vowing to fight the approaching Kurdish and Arab forces until their last breath. Others are surrendering, choosing to live under the custody of their enemies rather than sacrifice themselves for a losing cause.

The territorial caliphate that Islamic State emir Abu Bakr al-Baghdadi declared from the Grand Mosque in Mosul over four years ago is dead and buried. A few hundred stragglers remain in the village of Baghouz, ready to be killed or captured. The Islamic utopia Baghdadi effectively sold at that particular time, which brought tens of thousands of foreigners from 110 different countries into Iraq and Syria, turned out to be a ruse. Some foreigners who joined the Islamic State are now begging to come back to their countries of origin, as big an admission as any that they made a terrible mistake.

If you listened to the testimony of outgoing CENTCOM chief Gen. Joseph Votel last week, you would get a much different assessment of the Islamic State’s staying power. “What we are seeing now is not the surrender of ISIS as an organization but in fact a calculated decision to preserve the safety of their families and preservation of their capabilities,” Votel told the House Armed Services Committee on March 7. “We will need to maintain a vigilant offensive against this now widely dispersed and disaggregated organization.”

In a way, Votel is right. While the Islamic State is now at the lowest point as an organization (if you told Baghdadi his caliphate project would be over in four years, he would have laughed in your face and called you an infidel) the U.S. intelligence community reports that between twenty thousand to thirty thousand fighters remain in its ranks. Just because the Islamic State no longer governs territory and collects taxes like a proto-state doesn’t mean it lacks the ability to execute attacks. Bombings, shootings, and ambushes will continue against the Syrian Democratic Forces and the Iraqi army across the border over the short and medium term. There will always be a stretch of ungoverned land in Syria and Iraq where the militants can rest, extort, and plan for the next operation. The Assad regime is still too weak to take care of the problem militarily, outsourcing much of its security tasks to Iranian-organized militias. And the Iraqi security forces simply haven’t built up the intelligence, surveillance, and reconnaissance capability to perform solid, effective targeting operations.

The Trump administration looks at all of this and sees a justification for keeping a few hundred troops in Eastern Syria—not to mention the five thousand troops already stationed in Iraq— presumably to keep the peace and ensure the Islamic doesn’t come roaring back to life. The American people are supposed to believe that four hundred U.S. soldiers can somehow keep the lid on the boiling pot that is Syria, a country still very much in a state of war.

They couldn’t be more mistaken.

It’s important to remember why the Islamic State rose to such extraordinary heights in the first place. While the common belief in Washington is that the 2011 U.S. troop withdrawal from Iraq provided the jihadists with a new lease on life, the real source of the terrorism problem was (and remains) the incompetence, predation, and viciousness of the Iraqi government in Baghdad. The period between 2011 and 2014—the year the Islamic State drove the Iraqi army out of Ramada, Fallujah, Mosul and Tikrit—can only be described as a prelude to the catastrophe that was to come. And the story had little to do with decisions made thousands of miles away in Washington.

The government of Iraqi prime minister Nouri al-Maliki was a jihadist’s dream. Here was a prime minister who viewed governance not as the noble work of a public servant, but as a personal vanity project and a quest for absolute power and control. The prime minister’s Sunni majority regions who were critical of Baghdad were declared enemies of the state and arrested. Sunni residents were typecast as terrorist sympathizers or insurrectionists, a segment of the Iraqi population constantly scheming to recreate the Sunni minority rule that characterized Iraq for centuries. Washington’s appraisal of Maliki as an Iraqi nationalist turned out to be wrong; at his core, he was a highly polarizing and paranoid figure who saw enemies all around him and who viewed Iraq’s affairs as a sectarian.

By the time Maliki was forced out of the prime minister’s palace after eight years on the job, the Islamic State was making its way south towards the gates of Baghdad. Much of northern, western, and central Iraq was wrested from the Iraqi army’s control. The Iraqi military, whose senior military leadership was gutted and restocked by Maliki cronies, was unsure of what to do or simply incapable of doing anything. Tens of thousands of low-level Iraqi soldiers stripped off their uniforms and fled for their lives, hoping and praying that marauding Islamic State fighters on the warpath wouldn’t mistake them for troops. Some were able to escape, but many others paid with their lives; in the biggest Islamic State massacre known to date, 1,700 Shia Iraqi cadets from Camp Speicher were marched into the desert, executed, and dumped into mass graves.

It took U.S. airpower and the slapdash recruitment of irregular Shia militia units to hold the line and bail out the Iraqi government from total collapse.

Five years later, Iraq is at risk of committing the same exact mistakes. Indeed, some have already been made. Thousands of Sunni Iraqis who lived in Islamic State territory or were coerced into joining the group have been summarily detained by the predominantly Shia Iraqi security forces, where they are taken in for questioning, tortured into making confessions, dragged to court, and sentenced to death. Last week, Human Rights Watch released a report documenting 1,500 children accused of ISIS affiliation living in Iraq’s horrid detention system. Around 185 foreign children have been convicted on terrorism offenses—and given the way Iraq’s criminal justice system works, it’s a safe assumption that many of those convictions were based on torture-induced confessions.

Can a U.S. soldier from Colorado, New Hampshire, or Florida do anything at all to mitigate these problems? The answer is self-explanatory: no, they can’t. Addressing the root causes of the ISIS phenomenon, from a political system infected with corruption, nepotism, and sectarianism to a oversized bureaucracy unable to actually bureaucratize, is the sole job of Iraq’s political leaders. The United States does not have the patience, capacity, attention span, or knowledge to do for Iraqis what Iraqis must do for themselves. Nor is it in the U.S. interest to even try.

Thanks in large part to the U.S. military and its coalition partners, Iraq and Syria has been given another opportunity to be masters of their own destiny. The Islamic State, however, is lurking in the corner ready to capitalize on mistakes. Unless and until the governments of the region start taking responsibility for their own affairs and stop tripping over the same rock, terrorism will persist regardless of how many thousands of American troops are deployed.

Foreign-troop deployments won’t pacify the Middle East or extinguish the Islamic State. The best thing President Donald Trump can do is get on the phone and make it crystal clear to his Arab colleagues that America won’t and indeed can’t solve their problems. This would be far more effective than signing off on an indefinite U.S. military presence.