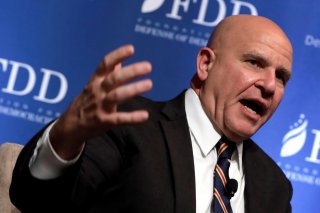 In February 1991 I fought as a green 2nd Lieutenant under then-Captain H.R. McMaster, who would go on to win combat fame in 2005 Iraq and as Trump’s National Security Advisor. I watched McMaster provide exceptional leadership of our unit prior to war and watched him perform brilliantly under fire during combat. It gives me no pleasure, therefore, to note that his most recent work in Foreign Affairs has to be one of the most flawed analyses I’ve ever seen.

McMaster’s essay, “The Retrenchment Syndrome,” is an attempted take-down of a growing number of experts who argue American foreign policy has become addicted to the employment of military power. I, and other likeminded advocates, argue this military-first foreign policy does not increase America’s security, but perversely undercuts it.

We advocate a foreign policy that elevates diplomacy, promotes the maintenance of a powerful military that can defend America globally, and seeks to expand U.S. economic opportunity abroad. This perspective takes the world as it is, soberly assesses America’s policy successes and failures of the past decades, and recommends sane policies going forward that have the best chance to achieve outcomes beneficial to our country.

Adopting this new foreign policy mentality, however, requires an honest recognition that our existing approach—especially since 9/11—has at times been catastrophically bad for America. The status quo has to be jettisoned for us to turn failure into success.

These failures have not been merely “policy mistakes” but have had profound consequences for our country, both in terms of blood unnecessarily wasted and trillions of dollars irretrievably lost. The very last thing we should do is defend a failed status quo and subvert new thinking. McMaster does both in his essay.

McMaster grievously mischaracterizes the positions of those who advocate for a sane, rational foreign policy. He tries to pin a pejorative moniker on restraint-oriented viewpoints via the term “retrenchment syndrome.”

Advocates for a restrained foreign policy, he says, “subscribe to the romantic view that restraint abroad is almost always an unmitigated good.” McMaster claims Obama’s 2011 intervention in Libya failed not because it destabilized the country but because Washington didn’t “shape Libya’s political environment in the wake of Qaddafi’s demise.” And he claims Trump’s desire to withdraw from Afghanistan “will allow the Taliban, al Qaeda, and various other jihadi terrorists to claim victory.”

In other words, the only policy option is to keep doing what has manifestly failed for the past two decades. Just do it harder, faster, and deeper.

But the reality of the situation is rather different.

We had won all that was militarily winnable on the ground in Afghanistan by the summer of 2002 and we should have withdrawn. Instead, we have refused to accept reality for eighteen additional years and we have lost thousands of American service members and trillions of American tax dollars to finance permanent failure.

We should never have invaded Iraq in 2003. But once we realized the justification for the war had been wrong, we should have rapidly withdrawn our combat troops and diplomatically helped facilitate the establishment of an Iraqi-led state. Instead, we refused to acknowledge our mistake, fought a pointless eight-year insurgency, and then instead of allowing Iraq to solve its own problems when ISIS arose in 2014, unnecessarily went back to help Baghdad fight its battles.

Likewise, the U.S. continues to fight or support never-ending combat actions in Syria, Libya, Somalia, Niger, Yemen, Saudi Arabia, and other lesser-known locations. There is no risk to American national security in any of these locations that engaging in routine and perpetual combat operations will solve.

Lastly, large portions of the American public—and even greater percentages of service members who have served in forever-wars—are against the continuation of these wars and do not believe they keep us safer. What would make the country more secure, however, is adopting a realistic foreign policy that recognizes the world as it truly is, acknowledges that the reason we maintain a world-class military is to deter our enemies without having to fight, and recognizing that our interests are far better served by being an exemplar to the world rather than trying to force it to behave a certain way.

The time has come to admit our foreign policy theories of the past two decades have utterly failed in their objective. We have not been made safer because of them and the price continually imposed on our service members is unnecessary and unacceptably high. It is time to abandon the status quo and adopt a new policy that is based on a realistic view of the world, an honest recognition of our genuinely powerful military, and realize that there are better ways to assure our security and prosperity.