It’s Time to Wake Up to the Nuclear Threat 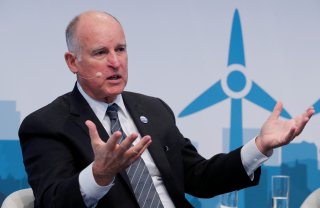 Jerry Brown, former governor of California, is calling for the world to wake up.

After over fifty years of working in and around politics, Brown remains dedicated to combating existential threats, including nuclear weapons. On the latest episode of Press the Button co-host Tom Collina and Jerry Brown dive into what Brown describes as “a topic that is as important as it is under-discussed.”

Brown sees leaders “sleepwalking. Edging around great catastrophe or doom and not being sufficiently chastened about the danger.” Whether at the national or state leve or among the public, he is concerned that complacency is getting in the way of progress.

“In Washington, people have great comfort that all is well, that the computer systems that the human personalities that are in this chain of command are all stable enough, that we can relax,” Brown explains. “Well, the great problem with that is that the outcome is so horrible if something goes wrong that the precautions and controls need to be much greater.”

He is driven by his own political experiences during the Cold War and present day. His firsthand experience worried about potential false alarms or miscalculations that could lead to the start of a nuclear conflict keep him speaking out. To help advance this cause, Brown currently serves on the boards of the Bulletin of the Atomic Scientists and The Nuclear Threat Initiative.

Attention, at least, is growing around the billions of dollars the U.S. government is spending on defense contractors to update its arsenal and build new nuclear weapons. Brown suggests that nuclear weapons spending should become stigmatized, similar to the spotlights put on tobacco and petroleum industries. The challenge, as Brown explains, is that so many within the government “are benefiting from the danger, and the increase in danger,” of nuclear weapons. But that, in and of itself, “should wake people up.”

When asked about the lack of attention the nuclear threat receives in Congress, Brown shares that “the focus and excitement on the daily activities totally obliterates the clarity, the lucidity required, to see what is the nuclear danger.” Unfortunately, Congress does not give the nuclear weapons threat the same attention it gives more politically beneficial or expedient issues. Somewhat ironically, he notes that Congress may not want to address nuclear threats unless, or until, something goes wrong—at which point they have proven their destructive power.

Brown hopes that a wake-up call does not come in the form of a “nuclear blunder,” but from the people advocating against their use. “We’re in this world of ours that has so many advantages that is so creative and so innovative, and so full of possibilities. But, one of the big dark possibilities is annihilation and catastrophe and [he hopes] those who can see it can take a few minutes to reflect on our duty-bound to take much greater efforts, much more creative efforts than we've seen today.”

For this, Brown calls on new leaders, and in particular, new leaders from the next generation.

The entire interview with former Gov. Jerry Brown is available here on Press the Button.