It Is Time to Update the President's Nuclear Command Authority 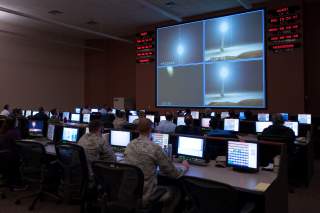 Last week, the California Senate approved AJR-30, a resolution that calls for restricting presidential authority to launch a first nuclear strike. It would not be surprising if other states decided to take similar action responding to increasingly widespread concern about the risk that President Donald Trump might decide to resort to nuclear weapons if North Korea continues to refuse to denuclearize. Indeed, legislation that would prohibit the president from launching a nuclear first strike absent an explicit resolution from Congress has been introduced by Democrats in both houses of Congress (H.R.669, S.200).

Although the common belief that presidents possess complete and unfettered freedom to use nuclear weapons is not entirely correct, there are few barriers to such action. This is true even in the case where the United States is the first country to resort to nuclear weapons. What barriers that do exist are largely informal as former special advisor to National Security Council Peter Feaver recently explained. Even if a decision by Donald Trump to send nuclear missiles against North Korea on the spur of the moment would likely prompt questions and delays from military commanders, this does not mean that U.S. citizens should have to rely on such informal and unproven mechanisms to stop such a strike.

Presidential authority to employ nuclear weapons almost at will is rooted in history and specific Cold War period scenarios.

Its historical roots can be traced to World War II, when the president in his capacity as commander-in-chief (CINC) possessed full unchallenged authority to make all decisions related to the prosecution of war. This authority extended by default to President Harry Truman’s decision to use nuclear weapons in 1945. After the end of the Cold War, no one seriously thought about limiting the powers of the president in his CINC capacity until after the U.S intervention in Vietnam.

The scenario-specific roots of presidential authority concerning nuclear weapons were determined by the common expectation of how World War III would start—namely, with a large-scale nuclear attack on the U.S. homeland by the Soviet Union. Such a massive Soviet strike, which became feasible by the end of the 1960s, would have left precious little time for a decision to respond. Therefore, authority to launch a response had to be concentrated in the hands of one person assisted by a small group of advisors and the chain through which the order to strike back was communicated had to be made as short as possible.

It is hardly surprising that, given the predominance of that scenario, limits on presidential nuclear authority was never seriously discussed as Congress approved the 1973 War Powers Act. That law was passed in Vietnam’s aftermath with the intent of otherwise limiting the president’s authority to wage wars without congressional approval. Instead of questioning the President’s authority over nuclear weapons, the last two decades of the Cold War saw that authority strengthened.

When the Cold War ended, the specter of a large-scale nuclear war quickly became distant. Yet, sole presidential control of these weapons was not challenged. In fact, sometimes it was employed toward positive ends. For instance, in 1991 President H. W. Bush single-handedly (with assistance and support of the Joint Chiefs of Staff and the Office of Secretary of Defense) decided to radically reduce the U.S. arsenal of tactical nuclear weapons. That decision was unilateral, and although the Soviet Union was invited to follow suit (it did only ten days later), the decision would have stood even without Soviet reciprocation.

Nonetheless, debates about the extent of presidential authority should have begun long ago—soon after the end of the Cold War. During the first term of President George W. Bush, for example, such authority was not contested when that administration, the military, and the nuclear weapons complex contemplated the limited first use of atomic weapons in limited conflicts.

However, new rules for the employment of nuclear weapons cannot be shaped along the same lines as the War Powers Act. This is because there will not be enough time for the entire Congress to debate such use seriously and it would be unwise to have an open discussion of the possibility of nuclear use. There appear two categories of relevant contingencies, which should be addressed in very different ways.

The first is effectively the Cold War scenario—a large-scale attack on the U.S. homeland with nuclear weapons or with dual-capable weapons when there are reasons to believe the delivery vehicles may carry nuclear warheads. In that case, the existing procedure, which gives the president full and unrestricted authority to order a nuclear strike should continue to apply. It would be, however, desirable to institutionalize that procedure through legislative action.

The other contingency involves two very different scenarios, but these can be addressed in the same way. The first is a limited nuclear attack on American and allied troops. This scenario would be in line with the widely assumed Russian strategy of limited nuclear use in response to a conventional attack, also known as “de-escalation.” Such a limited use would not constitute an immediate threat to U.S. homeland, but might (or might not) require a nuclear response. Another scenario is similar to the ones discussed fifteen years ago—the limited first use of nuclear weapons in a mostly conventional conflict identical to the second Persian Gulf War (2003). Nuclear use in the second scenario would be highly counterproductive and almost unthinkable, but it would still be desirable to build institutional and legal firewalls against this practice.

In both of these scenarios, it would be prudent to involve Congress in ways short of legislative action. For example, Congress could designate a special group of legislators representing both houses, which must be consulted if the president and his military advisors were to decide to cross the nuclear threshold and which would have the power to block such decision. The same procedure would allow the same congressional leaders to weigh in before the president could pre-delegate authority to use nuclear weapons to combatant commanders in a conflict that begins as conventional.

That body could be made similar to the Select Committees on Intelligence, which exist in both House and Senate except that— to streamline the decisionmaking process—it would make sense to create a body that represents both houses. The benefits of designating a permanent group of legislators for this purpose are obvious.

They can provide a vital check on the president and his advisors in line with the fundamental concept of checks and balances, which underlies the American political system. At the same time, they can make their decision quickly and outside the public eye, which should work well in situations when the time available for decisions may be measured in days rather than minutes. Consultations can also remain confidential and thus not adversely affect the prosecution of a war, nor alert the opponent to the availability of a nuclear option for U.S. combatant commanders.

Hopefully, an act by Congress along these or similar lines would put an end to worries—sometimes well-justified—about the ability of a president to use nuclear weapons without sufficient justification. In any event, it is high time to transition from vague calls for such limits to practical proposals capable of addressing the threats and challenges of today’s world.

Miles A Pomper is a senior fellow in the Washington, DC office of the James Martin Center for Nonproliferation Studies, Previously, he served as editor of Arms Control Today and lead foreign-policy reporter for Congressional Quarterly.

Dr. Nikolai Sokov is a senior fellow at the James Martin Center for Nonproliferation Studies in Monterey. Prior to joining the Center, he was a nuclear arms control negotiator with the Soviet and then Russian Foreign Ministry and contributed to the START I, START II, INF Treaties as well as other bilateral and multilateral agreements.