Joe Biden Once Supported Surging Troops Into Afghanistan, But That All Changed In 2009 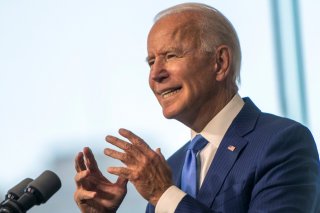 In his 2014 memoir, Duty: Memories of a Secretary at War, former Defense Secretary Bob Gates famously described then-Vice President Joe Biden as someone whose foreign policy credentials left a lot to be desired. While calling Biden “a man, of integrity,” Gates wrote that ”I think he has been wrong on nearly every major foreign policy and national security issue over the past four decades.” The quote elicited reverberations in Washington at the time—it’s not every day a former CIA Director, defense secretary and foreign policy graybeard criticizes a sitting vice president in such a dismissive tone.

Whether you agree or disagree with Gates’s depiction of Biden depends in large part on whether you´re a Republican or a Democrat. But there is one judgment call Biden was indisputably right about: the wisdom (or more accurately, the lack thereof) of sending tens of thousands of additional U.S. troops to resource a counterinsurgency campaign against the Taliban. And Biden, seeking to attract progressives on his left flank, has no intention of letting anybody forget about it.

Speaking to Margaret Brennan of Face the Nation in February 2020, Biden reminded viewers about his early opposition to the Obama administration´s Afghanistan troop surge. “Look, I opposed the surge in the first place. Number one, I didn't think we should have even the troops we sent there,” he said. “I didn't think we should have had the number of troops, which is considerably less than...this president [Trump] added.” Biden was so passionate about this point that when Brennan asked whether he bore any responsibility if the Taliban came back to power and again began locking women in their homes, he responded in the negative. “The responsibility I have is to protect America's national self-interest and not put our women and men in harm's way to try to solve every single problem in the world by use of force.”

It would be disingenuous, however, to say that Joe Biden always wanted out of Afghanistan. Indeed, during his last several years as a U.S. senator, Biden reiterated how the U.S. strategy in that country was flailing because the George W. Bush administration took its eyes of the ball by averting its gaze from the good war. During a June 2006 Foreign Relations Committee hearing, Biden argued that Afghanistan remained the under-resourced step-child to Iraq, where around 140,000 U.S. troops and tens of billions of dollars were being poured into the country to help stabilize a country in civil war. Recalling a previous trip to Afghanistan, Biden stated that all of the generals he met said they “needed more, more—not fewer, but more assets in order to finish the job.”

Then-Sen. Biden made the same point nearly a year later when talking to reporters. “Afghanistan was a just and necessary war. Totally just. But to confuse it, now, with an unjust and necessary war (Iraq) is ... limiting our ability to be able to deal with the war that must be dealt with. “Biden went on to declare that if we surge troops anywhere, it should be in Afghanistan.”

His position didn´t change much during the 2008 presidential campaign. During his only vice presidential debate with Alaska Gov. Sarah Palin, Biden lamented that “we have spent more money -- we spend more money in three weeks on combat in Iraq than we spent on the entirety of the last seven years that we have been in Afghanistan building that country.” If his running mate, Barack Obama, was elected, he said, the United States would spend more time on Afghanistan and far less on Iraq.

That was before Biden made a trip to Afghanistan in 2009. Shortly before entering the vice presidency, Biden delivered a bleak progress report on the war to Obama, who set his deputy to the country on a fact-finding trip. And the fact, according to Biden, was that the situation was worse than even they anticipated. “It’s going to be a very heavy lift,” he told the incoming commander-in-chief.

Throughout 2009, Biden was the one cabinet officer in attendance who was willing to push back against what the Pentagon and the Joint Chiefs of Staff were recommending. Whereas commanding Gen. Stanley McChrystal, supported by Defense Secretary Bob Gates, Chairman of the Joint Chiefs Adm. Mike Mullen and CENTCOM Commander David Petraeus, wanted 40,000 more troops to salvage the war (Secretary of State Hillary Clinton was also in favor of an increase), Biden sat on the opposing side of the fence and cautioned Obama from falling into a Vietnam-like trap. A senior military official who was participating in the inter-agency debate at the time remembered Biden fighting ¨tooth and nail¨ against the surge. ”Biden really loudly opposed, visibly opposed in the review, the surge,¨ this official told the Financial Times in 2019. “I’m certainly willing to give him that he got Afghanistan right.”

Indeed, the veep was so concerned about the road the generals were leading his boss down that he spent the Thanksgiving holiday writing letters to Obama imploring him to think long and hard about the strategy before committing to it via presidential order. As reported in Bob Woodward´s 2010 book, Obama’s Wars, Biden even met with Obama one-on-one in a last-gasp attempt to talk some sense into him. Obama, of course, would go on to order a spike in the U.S. troop presence by another 30,000 forces. The surge would have a modest tactical effect, reducing the violence on the ground. The corruption and incompetence in the ranks of Afghanistan´s government, meanwhile, continued without losing a stride.

Getting out of the war in Afghanistan may be the only issue Joe Biden and Donald Trump agree on. The still-outstanding question is whether a President Biden would leave a residual counterterrorism force in the country as he has suggested in the past (it´s tough to see how this would be any different from the status-quo) or finally extricate Washington from the longest conflict in U.S. history.

Daniel R. DePetris is a columnist for the Washington Post and a contributor to the National Interest.