Lesson for Iran?: With U.S. 82nd Airborne Division in the Air, War in Haiti Was Halted 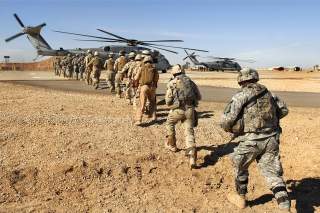 President Donald Trump on Friday morning tweeted that he had been “cocked & loaded” for an attack on Iran overnight but recalled the attacking force ten minutes before the strike. What behind-the-scenes reasons that may have contributed to the aborted mission are as yet unknown. But a very similar situation played out twenty-five years ago when the 82nd Airborne Division was in the air on a mission to invade Haiti, only to have the president abort the mission barely two hours before the attack was to begin.

In September 1991, Haitian president Jean-Bertrand Aristide had been deposed in a coup by Army Gen. Raoul Cedras. During the 1992 election, then-candidate William J. Clinton had promised that if he won, he would return Aristide to power. In 1993, Clinton started ratcheting up the pressure on the Cedras government to step down, imposing increasingly stringent sanctions.

In June 1993, the New York Times reported that senior administration officials, “were imposing ‘a very high price’ for the continued defiance by the military leaders of Haiti against international demands,” that were effectively strangling Haiti’s economy. Haitian officials from the deposed Aristide regime complained that without the threat of invasion, Cedras would never give in. Even Clinton’s own supporters suspected sanctions alone would prove ineffective.

The situation in Haiti languished for the rest of 1993 and into the first half of 1994. Clinton was being increasingly accused in the media of being irresolute and weak. Some of Clinton’s closest advisors had privately suggested that having a good foreign-policy win might help to bolster his image as a strong leader at home. When Clinton asked his advisor Dick Morris what arguments might compel Americans to support his Haiti plan, Morris said he didn’t know much about Haiti, but “this isn’t about Haiti,” he explained, “it’s about American politics a month before the 1994 election.” That resonated with Clinton.

Morris also cautioned that the American people don’t do well with casualties, so he had to use an overwhelming invasion force to ensure maximum military success. Clinton agreed. To muster the invasion the president ordered two aircraft carriers—the USS America and USS Eisenhower—that would be used to ferry thousands of men, fifty helicopters, armored personnel carriers, and other tools of war.

The invasion force would be composed of twenty thousand men all together, but perhaps the most compelling part of the force—part of what became known as Operation Uphold Democracy—was to be thousands of paratroopers of the 82nd Airborne Division, launching from Fort Bragg, North Carolina in sixty-one planes; it was planned to be the largest airborne operation since World War II.

The question now was, would Cedras capitulate to the overwhelming force arrayed against him—the entire Haiti armed forces had seven thousand men equipped with World War I weapons—or would the threat alone prove sufficient. To try and head off war but still score a political win, Clinton sent a delegation led by former President Jimmy Carter, then-Senator Sam Nunn, and Former Chairman of the Joint Chiefs of Staff Gen. Colin Powell.

Their mission was to go to Haiti on September 16, 1994, and offer Cedras amnesty if they would willingly step down; refuse, and an overwhelming invasion would force them from power. There would be no amnesty then. At first Cedras was defiant and said he would fight to the last man and die rather than to surrender. The negotiations were going nowhere.

For the invasion force to meet its operational planning the ships had to be in place, and the scores of planeloads of paratroopers had to depart from Fort Bragg by 5 p.m. that day. Clinton had told the delegation that they had to be finished with negotiations by noon that day so they could leave and be safely out of the combat zone before the outbreak of hostilities; Clinton didn’t want to risk having such high-value personnel used as hostages.

But noon came and went without resolution. To make the 5 p.m. deadline, Secretary of Defense William Perry had to give the order for the paratroopers to board their planes by 1 p.m. The negotiations were still ongoing, but Perry stuck to the plan. “Pack ‘em,” he told the 82nd commanders.

Clinton was getting nervous as the time continued to tick without resolution. Finally, at 5 p.m., Powell called the president and said he had a tentative agreement with Cedras but that it wasn’t what Clinton had offered. After a quick review, Clinton stayed firm and said “no deal.” At 5:45 p.m. the order was given to launch the airborne troops towards Haiti. At precisely 6:47pm the first plane lifted off. The invasion had begun.

Carter and Powell continued well past the time it was safe for them to have left, imploring Cedras to avoid bloodshed and agree to step down with honor. Finally, with the U.S. troops less than two hours from starting the assault, Haitian informants in North Carolina had seen the planes take off and had called one of Cedras’ top officials, Gen. Philippe Biamby.

Virulently anti-American, Biamby was upset in the presence of the U.S. negotiators at getting the news. At first he didn’t believe it. But then Powell explained—general to general—exactly what was about to happen if they didn’t give up. It was this final, authoritative word from Powell that finally convinced Cedras and his leaders to submit.

The group agreed to step down and allow the U.S. troops to land unopposed. War had been averted, and the rightful leader, Aristide, would eventually be returned to power. The story doesn’t end there, however, as in 2004 Aristide would again be driven from power in a coup, and U.S. Marines again returned to provide security. Sadly, Haiti remains a violent, corrupt nation to this day.