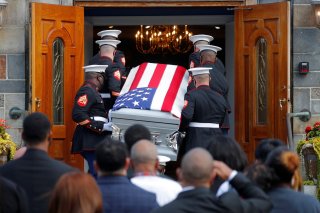 “We took young Americans and delivered them to the battlefield in Afghanistan to face an enemy that was incapable of reaching them otherwise.”

In the wake of the U.S. military’s dramatic exit from Afghanistan, the foreign policy establishment in DC has been hard at work proffering how and when the withdrawal from a two-decades-long conflict with no end in sight could have been handled better. Chaotic scenes from Kabul airport, two suicide bombings resulting in dozens of Afghan civilian deaths and the loss of thirteen American service members, and the seemingly inevitable collapse of Afghan civil society have all contributed to what is now a widely held consensus: though the United States needed to get out of Afghanistan, this was not the way to do it.

Critiques of the Biden administration’s approach to the withdrawal range from those claiming that the status quo (limiting the boots-on-the-ground presence to a small force of highly trained operators and providing air support to Afghan security forces) could have been maintained indefinitely to those arguing that a more coordinated and intentional mobilization of multilateral diplomatic negotiations could have prevented such a rapid collapse of the Afghan state. Adam Weinstein, a Research Fellow at the Quincy Institute for Responsible Statecraft and a former marine who served in Afghanistan in 2012, recently sat down with co-host Tom Collina on Press the Button to share his thoughts on the withdrawal from Afghanistan, and more importantly, the lessons we should take away from it.

“I think some of the criticism that the Biden admin has been getting about the exit is actually not where the criticism should focus,” he told Collina. “To me, the biggest problem with the exit was that the Special Immigrant Visa applicants, or the former interpreters, should have been moved out of Afghanistan beginning much earlier.”

Despite this very focused critique of the sequencing of the withdrawal, Weinstein still supports the Biden administration’s decision to finalize the withdrawal from Afghanistan, a position largely informed by a belief that the status quo was untenable and that withdrawal from a twenty-year-long conflict was inevitably going to be extremely challenging.

“I think we always have to remember, the Afghan Security Forces were taking incredible losses, especially over the last couple of years. In the last two years, 10,000 deaths per year. And when people say ‘we could have just kept the status quo going’, what they are implicitly saying is 10,000 Afghan soldiers could have died every year indefinitely, and that’s a cost that is worth paying,” Weinstein said. “Anyone who says we could have kept the status quo in Afghanistan the way things were going is being intellectually dishonest.”

This ingenuine argumentation, Weinstein noted, is all too frequent within the American foreign policy establishment in Washington.

“It was a lonely position to say, ‘let’s withdraw’—let’s not forget that” he added, “if you had been the person out there saying ‘I think [Afghan Security Forces] will collapse in a couple of weeks,’ you would have been a pariah in our policy conversation. And we should probably have a discussion about that—why has it become a faux-pas, or a taboo, to talk about worst-case scenarios?”

Symptomatic of a wider ideological rigidity that has defined the U.S. foreign policy apparatus in the post-9/11 world, this unwillingness to recognize and evaluate on-the-ground realities plays an increasingly central role in the quagmirical misadventures of the United States military, whether in the Middle East, Africa, or Central Asia.

“One of the big problems with U.S. foreign policy is that we get obsessed with specific things—whether it be catching Osama bin Laden, whether it be dealing with Al-Qaeda, and we can’t even have an honest conversation about the threats,” Weinstein noted, pointing out that the threats we should focus on should address the reality that more Americans will die from poor domestic infrastructure and a raging pandemic than from future terror attacks. Referring to the War on Terror, Weinstein added that “this is not a rational way to approach risk—it’s an emotional way to approach risk. And it’s the job of our elected leaders and our technocrats to approach risk in a rational way, that saves the most human lives, not in a way that is emotionally driven.”

Thankfully, in Weinstein’s view, this tendency to evaluate risk on emotional and symbolic terms is one not shared by President Biden or his administration: “It was a lonely position for Biden to take, but he was in touch with the American people,” Weinstein explained, pointing to several different polls that clearly indicated public opinion supported withdrawing from Afghanistan. “More importantly, I think he made a strategic calculation: the threats that emanate from Afghanistan—and there still are threats—don’t justify staying in Afghanistan indefinitely.”

Asked what the best way to commemorate and reflect on the lessons of the war in Afghanistan on the upcoming 20-year anniversary of the attacks that led to the invasion, Weinstein suggested that we “mourn the dead on 9/11, and then we should ask ourselves: was it worth delivering young Americans to the battlefield to be killed in those same numbers?”

The entire interview with Adam Weinstein is available here, on Press the Button.