This Man Is Trump's Biggest Problem in the Middle East 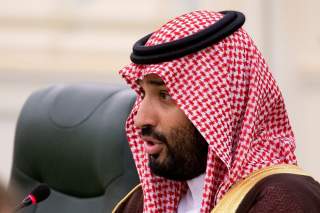 The United States has a big problem in the Middle East. His name: Mohammed Bin Salman.

The young Saudi crown prince once praised by New York Times columnist Thomas Friedman as an Arab version of Nelson Mandela (my words, not his) is back in the news again.  And as has become common fare for Bin Salman, the news is all negative.

Last week’s report that Saudi Arabia hacked Amazon founder Jeff Bezos’s cell phone and later attempted to blackmail the multi-billionaire into silencing criticism of the kingdom read like a Tom Clancy spy novel.  But sure enough, it was real.

"The information we have received suggests the possible involvement of the Crown Prince in surveillance of Mr. Bezos, in an effort to influence, if not silence, The Washington Post's reporting on Saudi Arabia,” U.N. special rapporteurs Agnes Callamard and David Kaye wrote in a joint statement on January 22.  “The allegations reinforce other reporting pointing to a pattern of targeted surveillance of perceived opponents and those of broader strategic importance to the Saudi authorities, including nationals and non-nationals.”

In the ensuing days, that pattern has further exposed itself. Two days after the U.N. findings were published, the Daily Beast’s Spencer Ackerman reported on another scheme. Desperate to silence a 27-year-old Saudi by the name of Abdulrahman Almutairi, a Saudi agent traveled to the United States with Almutairi’s father to pressure the social media activist to come back to the kingdom. The plot was foiled by FBI agents who intercepted the pair at Los Angeles International Airport and sent them back on a return flight.

The Saudi royal court has fiercely denied it had anything to do with the hacking of Bezos’ phone (it has yet to respond to the Daily Beast report). The Saudi Embassy in Washington called the Bezos allegations “absurd.” Saudi Foreign Minister Faisal bin Farhan Al Saud used the same word when he was asked about it during the World Economic Forum in Davis.

Of course, these officials represent the same country that has repeatedly insisted that the five-year Saudi bombing campaign in Yemen has taken pains to avoid killing casualties—explanations that defy credulity based on evidence from the U.N. Human Rights Council, the U.N. Panel of Experts, the U.N. Secretary-General, Amnesty International, and Human Rights Watch. This is also the same country that tried to pull the wool over the world’s eyes by claiming that Washington Post columnist Jamal Khashoggi left the Saudi consulate in Istanbul safe and sound.  The truth, of course, was that Khashoggi was butchered to death by Saudi agents flown into Turkey specifically for the purpose of silencing him for critical coverage of the crown prince.  Arms after the killing, the Central Intelligence Agency would assess with high confidence that Mohammed Bin Salman ordered the murder. Riyadh has strongly rejected any official involvement in Khashoggi’s death, again despite all of the evidence brought to light over the last year.

Targeting dissidents with violence, throwing them into prison on frivolous charges, lying about it, and covering it up abuses are nothing new in the Middle East. Every government in the region engages in some form of internal repression. Egyptian President Abdel Fatah el-Sisi has instituted a harsh, no-nonsense domestic crackdown that would make Hosni Mubarak’s 30-year reign look like a period of budding liberalism in comparison (60,000 people have been arrested for some form of political dissent since Sisi launched a successful coup against Mohamed Morsi’s administration). Turkey, a NATO ally, is one of the leading jailers of journalists in the world. The Assad regime tolerates no opposition, preferring to bomb entire cities to dust rather than enacting any meaningful political reform that could result in a weakening of its authority.  Iran is an expert at snuffing out demonstrations, killing hundreds of Iranians late last year during protests over fuel price hikes. Over the last few months, the Iraqi government has killed hundreds of protesters frustrated with the country’s sclerotic politics and dismal living conditions. We shouldn’t expect Saudi Arabia to act any differently from the region’s other authoritarian powers.

But this is, in fact, the point: Saudi Arabia is not special. Indeed, it is wholly unremarkable, yet one more despotic government in a sea of despotic governments. Ever since Mohammed Bin Salman ascended to the role of defense minister in 2015 (and arguably before that), the Saudis have been just as much of a destabilizing influence to the regional order as Iran has. Iran meddles in Syria, Iraq, Lebanon, Yemen, and any number of other countries where Tehran has a stake. All four of these countries are also competing grounds for Saudi Arabia, the last of which—Yemen—has been bombed into the stone age courtesy of Saudi pilots who either can’t shoot straight or don’t particularly care about civilian casualties. Not even the most talented Saudi diplomat, spinmeister, or Saudi-hired public relations guru can legitimately argue that plunging the poorest country in the Arab world into destitution, poverty, and disease is a boon for stability.

The Trump administration specifically and Washington, in general, have been walking on eggshells with the Saudi monarchy for a very long time. U.S. officials are reticent to offend the royal court, fearful that the Saudis will bolt from the U.S. camp and switch their allegiance to Russia and China. The fact those fears are wildly exaggerated (Vladimir Putin and Xi Jinping are fickle partners) is lost time and again.

Of course, nobody is recommending a rupture in the U.S.-Saudi relationship. That course of action would be counterproductive, not least because Washington and Riyadh do share interests in the counterterrorism and energy space.

Until this premise is accepted in Beltway circles, Washington risks misunderstanding just how minimal U.S. interests in the Middle East are and just how unwise, unnecessary and reckless it is to always jump to Saudi Arabia’s defense.