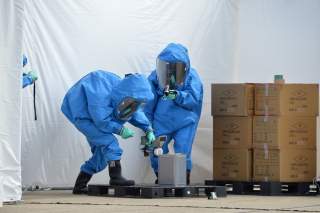 For most members of the news media, the Syrian civil war that erupted in 2011 has been a stark melodrama between good and evil, much as journalists oversimplified the earlier murky conflicts in the Balkans, Iraq, and Libya. In the standard media narrative, Syrian dictator Bashar al-Assad is an arch-villain, while Syrian insurgents are innocent victims of his atrocities. That narrative also parrots the official position of Washington and its Western allies.

Nowhere is the lack of media skepticism about government propaganda more evident than in the coverage of allegations that Assad’s regime has used chemical weapons against civilians. Worse, media outlets (with few exceptions) have ignored a growing body of counterevidence. Their coverage of the Organization for the Prohibition of Chemical Weapons (OPCW), the UN body tasked with investigating allegations that Syrian forces used such weapons in 2013, 2017, and 2018, has been especially credulous and unprofessional.

Independent analysts raised pertinent questions about several conclusions that the OPCW reached regarding the earlier incidents, and it was bad enough that mainstream journalists ignored or peremptorily dismissed those objections and critiques. But mounting evidence of outright OPCW misconduct during its investigation of the latest episode, the alleged use of chemical weapons in Douma (a rebel-held Damascus suburb) in April 2018, should have triggered a massive inquiry by journalists. Instead, there is the sound of crickets. The United States and Britain responded to the Douma incident with airstrikes against Syrian government targets, at least temporarily escalating Western military involvement in Syria’s civil war. Consequently, assessing whether those strikes were based on valid or erroneous information is rather important.

The OPCW released an official interim report in July 2018, and issued its final report in March 2019. The interim report asserted that the weapon used likely was a cylinder of chlorine gas dropped from the air. The conclusion about the delivery method was important because insurgent forces lacked either fighter planes or helicopters, making aerial delivery of a chemical weapon from that faction highly unlikely. Ruling out possible manual placement of the cylinder thus made Assad’s regime the obvious suspect for the atrocity. However, both the July 2018 and March 2019 reports omitted significant material that investigators had included in their initial draft of the interim report.

Then, in May 2019, an internal OPCW memo was leaked. That memo was written to the organization’s leaders and accused them of having misled the public about the investigation’s conclusions. Specifically, the conclusion that an aerial attack had been responsible was only a majority view, not a consensus. Ian Henderson, a member of the OPCW’s Fact-Finding Mission in Syria, has denied leaking the memo and the exact person who leaked it remains unclear. Regardless, it appears numerous inspectors harbored doubts about the official conclusion, and by extension, the Assad regime’s culpability. Yet OPCW officials had withheld the release of information about the dissenting views, with no explanation or apparent justification.

The OPCW’s response to a query from British journalist Peter Hitchens about the leak was strikingly defensive, insisting that the organization was focusing its investigation on “the unauthorized release” of the document questioning the official report, and adding that “at this time, there is no further public information on this matter and the OPCW is unable to accommodate [sic] requests for interviews.”  Fellow British journalist Robert Fisk observed acidly: “[H]ere is an institution investigating a war crime in a conflict which has cost hundreds of thousands of lives – yet its only response to an enquiry about the engineers’ ‘secret’ assessment is to concentrate on its own witch-hunt for the source of the document it wished to keep secret from the world.”  Unfortunately, he contended, “It’s a tactic that until now seems to have worked: not a single news media which reported the OPCW’s official conclusions has followed up the story of the report which the OPCW suppressed.”

Questions regarding the OPCW’s conduct became even more pertinent in November 2019, when WikiLeaks began releasing a series of internal documents showing the existence of dissenting views and demonstrating that the team that wrote the OPCW’s final report on Douma apparently hadn’t even gone to Syria.

At the very least, journalists should have exhibited caution about accepting official conclusions from the United States and its NATO allies about responsibility for the chemical attacks. Yet very few media outlets expressed the slightest skepticism. Instead, the vast majority repeated Washington’s original allegations and the OPCW’s subsequent conclusions as though they were established, indisputable facts.

The unwillingness to challenge those official accounts continued even when information mushroomed about questionable aspects of the OPCW’s Douma investigation. The pervasive media indifference to damaging revelations persisted.  What modest coverage the new information did receive was confined largely to non-mainstream outlets such as the Intercept, Antiwar.com, the Grayzone, and Counterpunch.  The Grayzone’s Aaron Mate expressed disappointment bordering on disgust about the performance of the journalistic community: “As the suppressed findings come out via brave whistleblowers and Wikileaks, they are still being kept from the public. That is because the Western media – including top progressive, adversarial outlets — have ignored or whitewashed the story.  And that media self-censorship has become a scandal in itself.”

The few mainstream journalists who did try to cover the increasingly embarrassing developments regarding the OPCW encountered ferocious resistance. One angry Newsweek writer, Tareq Haddad, resigned from that publication after editors repeatedly blocked his attempts to publish revelations about the leaked OPCW documents. One of the more disturbing aspects of his experience was that a key editor making that decision had previously worked for the European Council on Foreign Relations, an ultra-establishment think tank with extremely close ties to several NATO governments.

Former UN weapons inspector Scott Ritter noted that Haddad’s analysis had the potential to be a blockbuster scandal involving a widely respected UN agency, because his investigative article “was not about Ian Henderson’s report, but rather a series of new documents backed up by an inspector turned whistleblower known only as “Alex,” that accused the OPCW leadership of ignoring the findings of its own inspectors in favor of a revisionist report prepared by another team of inspectors based out of Turkey.”  The latter group apparently relied heavily on data and witnesses provided by the Syrian Civil Defense (the “White Helmets”)—a virulently anti-Assad medical aid organization backed by Saudi Arabia, France, and other foreign powers.  Perhaps most unsettling, Newsweek not only blocked publication in its own pages, it allegedly threatened to sue Haddad if he published his analysis elsewhere.

Coverage (or more accurately the lack of coverage) of the OPCW’s questionable conduct indicated that, as they had with regard to the Balkan, Iraq, and Libya conflicts, mainstream journalists are far too willing to serve as conduits for a questionable, government-inspired narrative. Once again the press is playing the role of a lapdog rather than a vigilant watchdog guarding the public interest.

Ted Galen Carpenter, a senior fellow in security studies at the Cato Institute and a contributing editor at the National Interest, is the author of 12 books on international affairs, including Gullible Superpower: U.S. Support for Bogus Foreign Democratic Movements (2019).