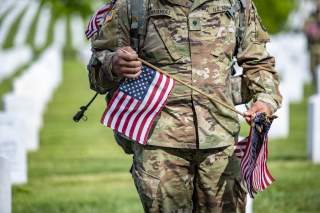 Memorial Day is the unofficial beginning of summer. Time to hit the beaches, fire up the grill, and take a long holiday weekend off. Almost lost, however, is the actual thrust of the holiday: to remember and honor those service members who have died in combat operations throughout our nation’s history. Contemplating the human cost of our recent wars is perhaps more needed now than it has been in decades.

It is both troubling and discouraging that most Americans today view service members as more a caricature than an actual person. When we discover someone is either an active serving trooper or a veteran, our reflexive response is almost always a big smile, a pat on the back, and a “thank you for your service!”

Such sentiments, while no doubt genuine and heartfelt, mask the true cost our service men and women—and their family and close friends—have paid and continue to pay as a result of these post–9/11 wars. I have many times been praised by well-meaning people with statements like, “I really appreciate what you and others have done, especially those who have died to defend our freedoms!”

And yet, the vast majority of American sons and daughters who have sacrificed the last full measure since 2001 have done so on missions that had very little—and often nothing—to do with defending America. While on the surface it seems noble and patriotic to assuage everyone with such comforting words who have lost a loved one in combat, we inadvertently make it easier to send future sons and daughters into unnecessary wars of choice. Let me explain.

In late 1941 thousands of U.S. sailors, soldiers, and marines were forward-deployed in the Pacific defending our country from any aggression. When the Japanese launched the surprise attack at Pearl Harbor, 2,300 American service personnel were killed. They can justly be said to have sacrificed their lives in the active defense of America. This is going to be hard for most of us to consider, but: can the same be said of the roughly 4,500 who were killed as a result of the 2003 war of choice in Iraq?

Americans were told the war was necessary because Saddam had weapons of mass destruction and might use them on America someday. Before the end of 2003, U.S. authorities had conclusively discovered that in fact there were no WMD. The justification for the war, therefore, was proven to have been in error; the security of America had never been at risk.

Yet as 2003 came to a close only 486 Americans had been killed in the war. That means more than four thousand additional men and women lost their lives (and another thirty thousand wounded) after we knew the security of our country was not at risk.

Did those men and women lose their lives in defense of our country? I submit on this day especially, we as a society need to take a cold, hard look at this matter from a different perspective. The implications are significant.

I can assure you that the extraordinary, excruciating loss felt by the sons, daughters, wives, husbands, moms and dads of each and every American service member who have died in combat operations since 9/11 feels the loss of their loved one with anguish of soul every bit the equal of those lost at Pearl Harbor.

The loss those families felt in 1941 could justly be assuaged by the knowledge their son or daughter died to keep our country safe. Could the same be said, however, about those who have recently made the ultimate sacrifice, like the four men who were killed by militia members in Niger in 2017?

The New York Times reported just last month that the family members of those four killed are still deeply hurt and angry they don’t know why their loved ones lost their lives. Elaine Trull, grandmother of Sgt. Dustin Wright, one of the four slain in Niger, said “I’m 74—I’m not going to get over this . . . I cry every day.” And why were American military personnel even in that part of Africa?

In February 2013 then-President Obama had ordered U.S. troops to Niger, telling Congress the deployment, “will provide support for intelligence collection and will also facilitate intelligence sharing with French forces conducting operations in Mali, and with other partners in the region.” American troops should never have been put in harm’s way for the benefit of any other nation. This is really the core point we should all understand on Memorial Day.

American political leaders should esteem the lives of our service personnel so highly that they only put their lives at risk when the security of our country is in danger and a military response is necessary. Everyone who volunteers to serve does so with the full knowledge they may one day have to sacrifice their life in the defense of our country, but because so few public officials actually serve or have family members who serve, they have become immune to the pain of our troops and their families.

Lethal military force should be used only when the security of America has been directly threatened—only when no other form of national power will ensure our security—and, in any case, used infrequently. Force should only be used as a last resort—not as a policy option of first choice, as is so often the case today.

This Memorial Day let us truly consider the terrible price thousands of service members and their loved ones have paid in recent wars. The best way we can honor them, and the survivors, is to ensure we don’t unnecessarily sacrifice one more Service Member unless it is absolutely necessary to our security. They deserve nothing less.