Is the Mighty NATO Alliance Dying? Three Ways It Can Be Saved 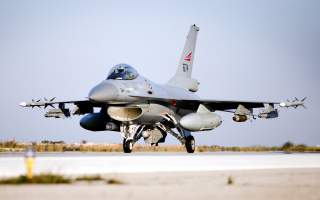 Rarely has a single moment of honesty caused such trepidation in the halls of power in Europe.

Sitting down with the Economist on November 7 for an exclusive interview, French President Emmanuel Macron talked about NATO as if it was a zombie slowly and mindlessly walking around without a care in the world, oblivious to its surroundings.

Macron’s description of the transatlantic alliance as brain dead has ruffled feathers far and wide and caused the foreign policy establishments on both sides of the Atlantic to shiver in fear. German Chancellor Angela Merkel, the dean of the European political elite, slapped Macron’s remarks as “inappropriate”—even pulling him aside to dress him down at a dinner to celebrate the fall of the Berlin Wall. Mateusz Morawiecki, Poland’s prime minister, condemned the Frenchman’s comments as “dangerous” to the alliance: “I think President Macron’s doubts about [Nato’s mutual defence clause] can make other allies wonder if perhaps it is France that has concerns about sticking to it,” Morawiecki told the Financial Times.  Back stateside, the International Institute for Strategic Studies’ Kori Schake wrote in the Atlantic that the sentiments expressed by Macron are indicative of a larger trend of Europeans increasingly questioning Washington’s commitment to the sacrosanct Article 5.

All of which begs a simple question: is NATO really a strong and durable military organization when a single negative comment from a single leader can shake the alliance to its core? Indeed, by throwing such a fuss, NATO boosters in the United States and Europe are making the case for those of us who have long argued that the alliance could use a jolt in the arm. Holding ceremonies, patting each other on the back, and assuring one another that everything is hunky-dory is no longer an option for NATO ministers.

The alliance will come together in London next month to commemorate its 70th birthday. Rather than delivering the same speeches that traditionally define these types of gatherings, the ministers in attendance should use the time as an opportunity to begin a discussion about dramatic reforms.

Today, there is no accountability in the alliance. All 29 members in effect have carte-blanche to do what they want regardless of how their decisions correspond to the principles of the NATO charter or impact the rest of the organization. Happen to unilaterally invade another country and support proxies who engage in war crimes against civilians? Don’t worry: all you will receive from the alliance is a verbal scolding and perhaps some symbolic sanctions. Are you a leader of one of those nations who moves at a snail’s pace on meeting its defense obligations? Don’t lose any sleep, because chances are that you will remain under Uncle Sam’s warm embrace either way. You could be the worst and most unhelpful member of NATO and remain in the club: once you’re in, you’re in for life.

Needless to say, this arrangement is not necessarily a boon for accountability. Neither does it contribute to NATO’s power and resilience as a defense alliance.  We have reached the point where punitive measures need to be on the table, both to punish bad behavior but more importantly to deter other members from traveling down a similar path. Those measures could include reform to the North Atlantic Treaty by introducing a suspension of expulsion clause (a reform that would be incredibly hard to achieve given NATO’s unanimity procedures) or by gathering members who are willing to play the role of enforcer into ad-hoc coalitions.  Whatever the form, the goal is the same: no more blank checks that increase the sense of entitlement over the long-term.

NATO has gotten far too big for its britches. The institutional pillars of the alliance are wobbling under the weight of small, insignificant members who are poor economically, weak militarily, and quite frankly undeserving of a timeless security guarantee. Montenegro, inducted into NATO in 2017, is a politically turbulent country with a standing army of 2,000 personnel and a GDP one-tenth the size of Alaska’s. North Macedonia, which the U.S. Senate voted 91-2 to induct into NATO, has a population of one-fourth the size of New York City and spends just above 1% of GDP on its military. If there are any serious arguments for including both as NATO members, one will have trouble finding them. Poking Russian President Vladimir Putin in the eye is not a sufficient explanation.

The alliance shouldn’t be adding more dead weight. NATO expansion only tacks on more security consumers onto the roster and increases the prospect that U.S. and European troops may one day have to risk their lives on behalf of countries that are geopolitically unimportant. NATO ministers should make it clear that NATO’s doors are closed. There is no more room at the Inn.

We get it: not many in the West like the Russians. Putin is a Russian nationalist at heart with a big chip on his shoulder. He views the collapse of the Soviet Union as a living nightmare and is inherently distrustful of Western intentions.  Putin has no problem dispatching hitmen to European soil in order to track down and neutralize the Kremlin’s enemies with the most toxic chemicals available. Moscow’s invasion of Ukrainian territory and annexation of Crimea have put massive dents in Russia’s overall image in the West.

But Russia can’t be dealt with like an annoying nat. We can’t swat at it and hope it buzzes to another part of the room. While it doesn’t have the strength, versatility, or wealth of the Soviet Union, Moscow does possess enough leverage (including thousands of nuclear weapons and a permanent seat at the U.N. Security Council) to be a player. NATO and Russia are next-door neighbors, and the last thing either neighbor wants is screaming and yelling on both sides of the white picket fence. The NATO-Russia Council needs to be resurrected from the dormant body it is today into a forum where real issues are discussed. It will take a long time for the political relationship to change and may not occur until a new generation of leaders takes over in the Kremlin. But the politics can’t bleed into the military domain. The military-to-military channel needs to stay open in order to mitigate the kinds of surprises that lead to misunderstandings, solidify mutual hostility, and make the politics even harder to manage.