NATO 'Encirclement' May Be Creating a New Crisis with Russia 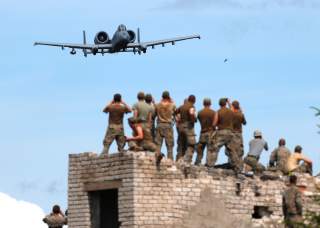 This essay was a runner up in the 2018 John Quincy Adams Society/TNI Student Foreign Policy Essay Contest.

Following the end of the Cold War and the dissolution of the Soviet Union, the United States moved to fill the security vacuum left in the post–communist space. It brought former Warsaw Pact states and Soviet republics into the North Atlantic Treaty Organization (NATO) and was public about its intentions to expand the Alliance even further to the east. American aid agencies and non-governmental organizations (NGOs) provided political and financial support to elements in Russia’s so-called “near abroad” not willing to follow Moscow’s lead.

One can argue that the United States’ intentions were noble. American officials feared that if their country turned its back on Eastern Europe, then Russia would reemerge from its state of post–Cold War disarray and reassert its military might over its former satrapies. Almost thirty years later, Russia has largely recovered from the post–Soviet economic depression that it endured and is looking to reestablish its traditional security mechanisms in Europe. The United States’ efforts to keep the peace in the former Soviet space were arguably a failure. American officials now look to compensate for their shortcomings by getting more involved in the region whether it be by levying economic sanctions on Russia or providing weapons to its neighbors. However, few in Washington would argue that these failures occurred because of the United States doing too much in Russia’s near abroad.

Few American officials recognized the security concerns that would develop in Moscow if NATO expanded. Some outright dismissed Russia’s worries about “NATO encirclement” by correctly citing that the United States withdrew the majority of its military forces from Europe in the years following the Cold War. However, such thinking overlooks other concerns held by the Kremlin. As it withdrew conventional troops, the United States exited the Anti-Ballistic Missile (ABM) Treaty in 2002 and promised the establishment of a ballistic-missile defense (BMD) system in Europe which would leave Russia vulnerable in the event of nuclear war.

Alliance expansion into the near abroad also empowered some of the most historically anti-Russian elements in that region—Ukrainian Banderites, Polish nationalists, Balkan Islamists. American-led regime change efforts against Middle Eastern governments in Iraq, Libya, and Syria greatly concerned Russia given their empowerment of jihadist forces, and, for the longest time, the Russian Empire and the USSR considered Western Asia to be in their sphere of influence as explained by British historian Christopher Andrew and KGB defector Vasiliy Mitrokhin in The World Was Going Our Way.

Fear of foreign intervention is a longstanding Russian historical concern. “At bottom of [the] Kremlin’s neurotic view of world affairs is [a] traditional and instinctive Russian sense of insecurity,” wrote George F. Kennan, father of the Cold War-era containment doctrine, in his famous Long Telegram. “Whereas the West sees Russia’s fear of invasion as groundless, history has shown Russian leaders that foreign intentions are typically hidden or fluid. Each age brings a new existential threat; there would always be another Napoleon or Hitler,” writes Benn Steil in Foreign Policy.

Russia has historically sought a buffer to protect itself from foreign invaders. Stalin wanted territory from Turkey and Iran after World War II because of those states’ proximity to Georgia, Azerbaijan, and Armenia. Neither he nor Mikhail Gorbachev would accept a unified Germany given that country’s role in invading Russia twice in the twentieth century. (Gorbachev also supported Russian military intervention in Georgia and Crimea.) After the Cold War, the United States ignored Russia’s historical insecurity about foreign encirclement by expanding NATO. As Andrew and Mitrokhin note, this came at a time when Russia’s territory was the smallest it had been since the reign of Catherine the Great.

Those in the U.S. foreign-policy establishment well-versed in Russian history were able to foresee the consequences of American meddling in the former Soviet space. Strobe Talbott, President William Jefferson Clinton’s point man for all things Russia, cautioned, “An expanded NATO that excludes Russia will not serve to contain Russia’s retrograde, expansionist impulses.” Kennan argued that NATO expansion would “inflame the nationalistic, anti-Western tendencies in Russian opinion,” retard the development of Russian democracy, bring about a “new cold war,” and “impel Russian foreign policy in directions decidedly not to [America’s] liking.”

While both Gorbachev and Boris Yeltsin opposed NATO expansion, U.S. meddling in the near abroad also ensured that these men would not be the type of leaders Washington would deal with in future negotiations with Moscow. The USSR’s dissolution brought about a decreased role for the vanguard of that empire, those serving in the armed forces and security/intelligence apparatus. After their aborted attempt to unseat President Gorbachev in August 1991, the security class was relegated to the wayside until American meddling in the former Soviet space gave them an excuse to claw their way back to power, a point lost on most Western observers.

In their other major KGB expose, The Sword and the Shield: Thye Mitrokhin Archive and the Secret History of the KGB, Andrew and Mitrokhin largely attribute the resurgence of the security class to one man: Yevgeniy Primakov. A former KGB Arabist, Primakov headed Russia’s external intelligence agency, the SVR, until 1996 when he supplanted the largely pro-Western Andrey Kozyrev as foreign minister. In his previous capacity, Primakov wrote a report in 1993 attacking NATO expansion as a threat to Russia and warned the United States the following year not to impede Russia’s efforts at political and economic reintegration with the former Soviet republics.

Primakov left the SVR in the care of his deputy, Vyacheslav Trubnikov. The agency authored reports for President Yel’tsin reflecting its own view on world events and providing complementary policy options. As foreign minister, Primakov no doubt encouraged Yel’tsin to adopt such views. During Trubnikov’s tenure, the SVR also extended olive branches to regimes such as Saddam Husayn’s Iraq and Slobodan Milosevic’s Yugoslavia because, according to Andrew and Mitrokhin, the agency did not want “to be defeated by the West.”

The East-West clash of civilizations view inherent in the security services did not depart from the Kremlin after Primakov’s ouster from the Yel’tsin administration in 1999. (He had become prime minister at that point.) Russia’s new president, Vladimir Putin, showed a considerable willingness to partner with the West on issues such as counterterrorism despite being a former KGB officer. It is unclear to what extent Putin initially embraced the clash of civilizations view held by many in the security class (commonly referred to as the siloviki throughout his tenure), but any suspicions he had were certainly warranted given the acceptance of Poland, Hungary, and the Czech Republic into NATO and the Alliance’s bombing of Yugoslavia, both of which occurred the year before he was elected president.

Upon Putin’s ascension to the presidency, the siloviki obtained key positions in what Amy Knight, author of Orders to Kill: The Putin Regime and Political Murder, calls Russia’s “power ministries,” the police and security agencies. (Additionally, KGB veteran Igor Sechin, Putin’s de facto second in command, became head of the state-owned Rosneft oil company.) Knight offers a profile of one of these men, Security Council head and former KGB officer Nikolay Patrushev, writing that, like Putin, he harbors “a deep distrust of the West, repeatedly accusing Western governments of plans to undermine Russia’s political stability.”

American meddling is sure to only reinforce the worldview held by Patrushev, Putin, and the other siloviki, and the way that information flows through Putin’s administration can do nothing but fan the flames of the new cold war. According to The New Tsar, written by former New York Times correspondent Steven Lee Meyers, Putin’s office computer reportedly lacks an Internet connection, a purposeful design so that he can solicit information from only his most trusted advisers, many of whom are siloviki. Putin has even come to favor certain security officials over others. According to Mark Galeotti, he has politically isolated the SVR and military intelligence, ensuring his primary flow of information comes from the Federal Security Service (FSB), the agency he (and Patrushev) once headed and many of whose members share the view that the West is trying to encircle and bring down Russia.

In short, provocative American actions—NATO expansion, support for the so-called “color revolutions,” regime change wars in the Middle East—have triggered historical Russian suspicions of foreign intervention and empowered a jingoistic security class that operates in an information vacuum. Russo-American relations are at a historic impasse as any further Western intervention in the former Soviet space or efforts to punish Russia for its overseas meddling will only affirm the view of the siloviki that there exists a Western plot to keep Russia down (with much of the Russian public sharing this view). They will respond by further severing ties with the West. The United States must acknowledge the role that it has played in the Russian security class’s consolidation of power, and it should consider decreasing its political-military presence in areas Russia traditionally considers to be in its sphere of influence (this would include both the former Soviet space and the Middle East). Doing so could weaken the narrative that the siloviki rely on to stay in power and restore Washington’s relations with Moscow to a healthy state.