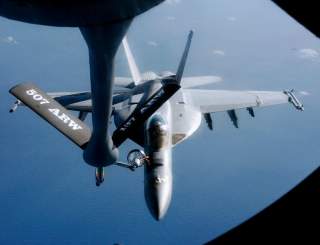 Diplomacy with North Korea looks like it’s moving in the right direction.

Chief U.S. negotiator Stephen Biegun is no longer being shunned by his North Korean counterparts. President Donald Trump is tweeting as if peace is just around the bend. And Secretary of State Mike Pompeo is openly talking about the desire of the United States to realize not just Pyongyang’s denuclearization but also peace and reconciliation on the Korean Peninsula.

There is plenty that can go right, but there is also a lot that can go wrong. This is North Korea after all, a country whose leadership is inherently distrustful of American intentions regardless of who the president happens to be. So, as we hope for the best, the Trump administration needs to plan for the worst—and planning for the worst means settling a Plan B in the likely event the nuclear talks end in stalemate.

So, what are America’s options if diplomacy is rendered obsolete?

U.S. officials habitually say that all options are on the table, including the use of U.S. military force. Statements like this are meant to send a warning the adversary can’t possibly misunderstand: we can either solve the problem the easy way or the hard way.

With North Korea, however, the war option is so patently ridiculous that it shouldn’t even be on the table to begin with. While the United States always reserves the right to protect its citizens and its allies in retaliation for a North Korean attack, there are only two scenarios where an attack would be likely: Scenario one: Kim Jong-un wakes up one morning and decides out of the blue to launch a volley of missiles towards South Korea, Japan, or Guam. Scenario two, Kim is provoked by the United States or its allies into responding.

A war with North Korea would be unthinkable if it ever came to pass. Seoul would be flattened by North Korean artillery batteries. Pyongyang would be like Berlin, circa 1945. Millions of North Korean refugees would stream towards China. The Japanese would be taking to bomb shelters. Millions of people would potentially die. And the global economy would be severely impacted. Sorry John Boltons of the world, but outside on an attack on the United States or its allies, war is no option at all.

A Return to Isolation and Sanctions?

The Trump administration could turn to sanctions again, enacting more economic restrictions in the hope that a tighter squeeze on Kim’s bank account would compel him to come back to negotiations in a weaker position. If the talks fail, then Congress would be itching to pass additional secondary sanctions on Pyongyang and may even press the White House to slap penalties on large Chinese banks for so much as having a tentacle in the North Korean economy.

We all like to believe that the United States holds such a dominant position in the international financial system that it can coerce regimes into doing what they wouldn’t ordinarily do. But the Kim regime has shown time and again how fanciful this assumption has been. The North Koreans are masters at sanctions evasion, devising ever-creative ways to make cash and send it back to the homeland. Illicit ship-to-ship oil and coal transfers in the waters of the Pacific Ocean; the use of shell companies, subsidiaries, and middlemen; the conversion of embassies into makeshift businesses; arms smuggling; and hacking of overseas banks have all poked holes in the U.N. Security Council sanctions architecture. UN monitors recently assessed the sanctions on Pyongyang as “ineffective.”

Then there is the China angle. As long as Beijing isn’t willing to cooperate, is inconsistent on implementation, or pleads ignorance as cross-border trade continues, Kim will likely make enough money to satisfy the elites and keep his regime in business.

Kill Them with Kindness?

U.S. policy has directly linked denuclearization with normalization. If Kim Jong-un doesn’t hand over his nuclear warheads, destroy his centrifuges, dismantles his plutonium facilities, and quash his missile program, then Pyongyang will be prohibited from enjoying a warm and cozy relationship with the United States or its neighbors.

Trump, however, is an unconventional president. Deep down, it’s possible he may not care about North Korean nukes as much as he cares about being remembered in the history books as a president who achieved something big on North Korea. This could conceivably include declaring the Korean War over, signing a peace declaration with the North, facilitating inter-Korean economic projects, establishing liaison offices, and transforming the bilateral relationship into something more than one of never-ending animosity.

Kim would still have his nuclear weapons. But as long as he doesn’t use them (and given that he cares about himself more than anything else, he likely wouldn’t), tensions would be irrevocably reduced and the Korean Peninsula would enter into an era of more normality. Perhaps after a decade of experiencing the monetary windfalls and security attached to being a full member of the international community, Kim may decide that maintaining a nuclear weapons infrastructure no longer necessary for his country’s defense.