The Obama Administration Destroyed Libya. Could Trump Make It Worse? 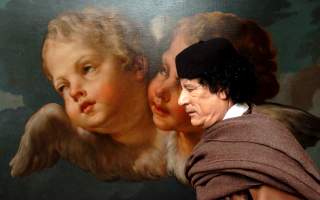 The Western-created disaster in Libya continues to grow worse. Fighting between Field Marshal Khalifa Haftar’s so-called Libyan National Army (LNA) and the even more misnamed Government of National Accord (GNA) has intensified in and around Tripoli. The LNA boasted on September 11 that its forces had routed troops of the Sarraj militia, a GNA ally, killing about two hundred of them. That total may be exaggerated, but there is no doubt that the situation has become increasingly violent and chaotic in Tripoli and other portions of Libya, with innocent civilians bearing the brunt of the suffering.

An article in Bloomberg News provides a succinct account of the poisonous fruits of the U.S.-led “humanitarian” military intervention in 2011. “Libya is enduring its worst violence since the 2011 NATO-backed ouster of Muammar el-Qaddafi, which ushered in years of instability that allowed Islamist radicals to thrive and turned the country into a hub for migrants destined to Europe. Haftar had launched the war as the United Nations was laying the ground for a political conference to unite the country. It is now more divided than ever.” The country has become the plaything not only of rival domestic factions but major Middle East powers, including Egypt, Saudi Arabia, Turkey, Qatar, and the United Arab Emirates. Those regimes are waging a ruthless geopolitical competition, providing arms and in some cases even launching airstrikes on behalf of their preferred clients.

The United States also cannot resist the urge to meddle. Worse, U.S. officials seemingly can’t even decide which faction it wants to back. Washington’s official policy continues to support the GNA, which the United Nations recognizes as the country’s legitimate government—even though its writ extends to little territory beyond the Tripoli metropolitan area. President Donald Trump, however, had an extremely cordial, lengthy telephone conversation in April with Haftar and appeared impressed with Haftar’s professed determination to combat terrorist groups and bring order and unity to Libya. Neither Libyan faction now seems certain about Washington’s stance.

Given the appalling aftermath of the original U.S.-led intervention, one might hope that advocates of an activist policy would be chastened and back away from further meddling in that unfortunate country. Yet, that is not the case. Neither the Trump administration nor the humanitarian crusaders in Barack Obama’s administration who caused the calamity in the first place seem inclined to advocate a more cautious, restrained U.S. policy.

One poster child for such continuing arrogance is Samantha Power, an influential national security council staffer in 2011 and later U.S. ambassador to the United Nations. In her new book, The Education of an Idealist, Power takes no responsibility whatever for the Libya debacle. Indeed, flippant might be too generous a term for her treatment of the episode. “We could hardly expect to have a crystal ball when it came to accurately predicting outcomes in places where the culture was not our own,” she contends. American Conservative analyst Daniel Larison correctly excoriates her argument as “a pathetic attempt by Power to deny responsibility for the effects of a war she backed by shrugging her shoulders and pleading ignorance. If Libyan culture was so opaque and hard for the Obama administration to understand, they should never have taken sides in an internal conflict there. If the ‘culture was not our own’ and they couldn’t anticipate what was going to happen because of that, then how arrogant must the policymakers who argued in favor of intervention have been?”

The answer to Larison’s rhetorical question is “extraordinarily arrogant.” It is not as though prudent foreign-policy experts didn’t warn Power and her colleagues about the probable consequences of intervening in a volatile, fragile country like Libya. Indeed, as Robert Gates, Obama’s secretary of defense, confirms in his memoir, Duty: Memoirs of a Secretary at War, the Obama administration itself was deeply divided about the advisability of intervention. The Joint Chiefs of Staff, Vice President Joe Biden, and Gates were opposed. Among the most outspoken proponents of action were Power and her mentor, Secretary of State Hillary Clinton. Gates notes further that Obama was deeply torn, later telling his secretary of defense that the decision was a “51 to 49” call.

The existence of a sharp internal division is sufficient evidence by itself that Power’s attempt to absolve herself and other humanitarian crusaders of responsibility for the subsequent tragedy is without merit. Indeed, it has even less credibility than Pontius Pilate’s infamous effort to evade guilt. They were warned of the probable outcome, yet they chose to disregard those warnings.

Power, Clinton, Obama and other proponents of ousting Qaddafi turned Libya into a chaotic Somalia on the Mediterranean, and the blood of innocents shed since 2011 is on their hands. Given the stark split within the president’s national security team, the Libya intervention was especially reckless and unjustified. The default option in such a case should have been against intervention, not plunging ahead.

The Trump administration should learn from the blunders of its predecessor and resist any temptation to meddle further. America does not have a dog in the ongoing fight between Haftar and the GNA, and we should simply accept whatever outcome emerges. Washington’s arrogant interference has caused enough suffering in Libya already.

Ted Galen Carpenter, a senior fellow in security studies at the Cato Institute and a contributing editor at the National Interest, is the author of thirteen books and more than eight hundred articles on international affairs. His latest book is NATO: The Dangerous Dinosaur.