Only Macedonians Can Decide If They Want to Join NATO 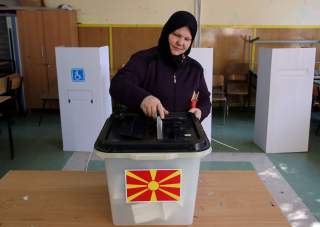 Macedonians went to the polls on September 30 to vote on a referendum that would have moved their country toward membership in the European Union (EU) and the North Atlantic Treaty Organization (NATO). In a surprising blow to Macedonia’s ruling party and Western officials, only 37 percent of Macedonians voted. Although they overwhelmingly backed the referendum—by 91 percent— they did not meet the 50 percent voter turnout threshold that was needed to legitimize the deal. Macedonians have spoken, but will American or European leaders listen?

As one of the successor countries to Yugoslavia in 1991, Macedonia—like many countries with a complicated past with both Western Europe and Russia—is contested geopolitically. The question of whether Skopje should chart an independent path, or choose between a Russian or Western orientation has been hotly debated. Until recently, the road towards inclusion in the American and European-backed order was closed to Macedonia. This was because Greece’s northern province is named Macedonia. To Athens, the country of Macedonia’s name posed a grave danger to Greek identity, culture, and territorial integrity. For years Greece blocked Skopje’s entry into the EU and NATO.

But a deal called the Prespa Agreement was negotiated in June whereby Greece would drop its opposition to Macedonia joining those Western institutions if Macedonia changed its name to North Macedonia. The vote on September 30, though advisatory and nonbinding, was supposed to give the government of Prime Minister Zoran Zaev the support needed to move forward with the name change and entrance into the EU and NATO. But it didn’t, and opposition parties are calling for Zaev to listen to the will of the people.

The fact that so many Macedonians decided to sit out such an important poll is a clear signal that a majority of the country is not onboard with fully aligning with the West. No matter how one feels about the outcome, the results must be obeyed. But unfortunately, that may not happen.

Already, Zaev is planning to go ahead with a parliamentary vote on the name change, even though he said the poll was a “success for democracy.” Zaev needs a two-thirds majority in parliament to approve the deal, and he may not get it. If he fails, he has threatened new elections in November or October to try and force the opposition out. Meanwhile, Washington, Brussels, and NATO might not take no for an answer.

The U.S. State Department released a statement declaring, “The United States welcomes the results of the Republic of Macedonia’s September 30 referendum, in which citizens expressed their support for NATO and European Union.” Moreover, the State Department said that Skopje should “take its rightful place in NATO and the EU” and that members of Macedonia’s parliament ought to “rise above partisan politics and seize this historic opportunity.”

Not to be outdone, the President of the European Council, Donald Tusk, and the head of NATO, Secretary-General Jens Stoltenberg, also released a statement. They declared, “an overwhelming majority of those voting supported [the deal]. It is now in the hands of politicians in Skopje to decide on the way forward. The decisions they take in the next days and weeks will determine the fate of their country and their people for many generations to come.”

Good intentions by the West are insufficient. The opinions and preferences of Macedonian people matter. The referendum lacked sufficient turnout and was therefore invalid by its own rules. A “yes” vote by parliament now would lack legitimacy. The people of Macedonia and the international press know that. This is why Macedonia’s opposition parties—which control 49 of 120 seats—will likely block the deal.

For the United States, NATO, and the EU to pressure Macedonia over the Prespa Agreement is paternalistic at best and anti-democratic at worst.

Western leaders cannot continually push their values and institutions onto other states and expect everyone will go along with it. Doing so contributes to Brexit, economic and ethnic populism, the democratic deficit, and all kinds of discontent.

If the West believes in democracy and self-determination, then it should let Skopje choose its own destiny. Macedonia’s rightful place isn’t with the West or the East; it is where the Macedonian people want it to be.

John Dale Grover is an Assistant Managing Editor at The National Interest. He is also a fellow with Defense Priorities and a writer for Young Voices. His articles have appeared in Real Clear Defense, The American Conservative, and FoxNews.com. Follow him on Twitter @JohnDaleGrover.