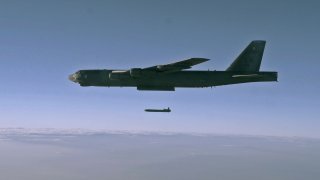 During a global pandemic, investment in nuclear weapons grew.

After over a year and a half of a global pandemic, one might think governments would adjust their spending priorities to shift resources to respond to the coronavirus. Not so fast. One area where government spending actually increased globally in 2020: nuclear weapons. The International Campaign to Abolish Nuclear Weapons (ICAN) released a report last month, Complicit: 2020 Global Nuclear Weapons Spending, that highlights the money that flowed from the government to corporations to lobbyists and back again. This cycle of funding helps to maintain and develop nuclear weapons.

On the latest episode of Press the Button, Alicia Sanders-Zakre, the Policy and Research Coordinator at ICAN and one of the authors of this report, shares that we are talking about “billions and millions, it's just a massive, massive amount of money.” The report finds that between the nine nuclear weapons states, a total of $72.6 billion was spent on nuclear weapons in 2020. Sanders-Zakre tells co-host Tom Collina that this system is really working for itself: “You could say [it’s] a nice return on investment for the companies who are spending a billion dollars lobbying which seems like a lot, but then they're getting over $27 billion back in contracts, so it’s really a system that works in their favor, to continue the production of nuclear weapons.”

Some nuclear weapons states have been hit the hardest by the coronavirus pandemic. Take the United States, which has lost more than 600,000 people to the virus, or India, where it is estimated that millions have fallen victim to the virus. Money was, and remains, desperately needed to combat the virus, but while money was flowing into the nuclear weapons space, none was seemingly available for the very real threat of the coronavirus. Reports show that even the money that the U.S. Department of Defense received from the CARES Act in 2020 for coronavirus relief was misused towards military supplies.

But the perplexity of this spending does not stop there. As Sanders-Zakre points out “something else about the pandemic that's notable in connection with nuclear weapons [is] that we also know that any use of nuclear weapons would be a global health crisis as well, of unimaginable proportions.” In essence, nuclear states were spending billions of dollars on something that risks even worse harm than what people are seeing with the coronavirus. Instead of overstrained health care workers or not enough hospital beds, a nuclear attack could mean no health care workers, and no hospital beds.

Sanders-Zakre believes that “it’s clear that the continued production and continued spending on nuclear weapons is not a strategic decision. It's not a strategic rationale, but rather is motivated by corporate interest and vested interests.” The challenge with reversing this motivation is that there is little public pressure to do so. While other social justice movements have taken the tactic of boycotting industries that are contributing to climate change or racial injustices, boycotting companies like Lockheed Martin or Northrop Grumman is challenging because they produce fewer items that are available for public use.

Nevertheless, Sanders-Zakre hopes “that the report also helps to show all of the different pressure points that people can put on to interrupt this cycle.” One of the things people can do is call on their governments to reduce nuclear weapons spending. In this vein, ICAN itself has played a key leadership role in the effort for the Treaty on the Prohibition of Nuclear Weapons (TPNW). This treaty, adopted in 2017, entered into force in January 2021, with fifty-five nation-states party to it. The treaty prohibits nuclear weapons, the development of nuclear weapons, and the testing, production, possession, and stockpiling of those weapons under international law. Not only can people put pressure on the federal government to denuclearize, but they can press local elected officials to sign the ICAN City Legislators Pledge to demonstrate a commitment to the TPNW. Also, they can ask town representatives to pass resolutions that align with the treaty’s goals.

When a government is spending billions of dollars on building weapons of mass destruction during a global pandemic it is a fairly easy task to see where its values lie. Now is the time to demand those values shift.

The entire interview with Alicia Sanders-Zakre is available here on Press the Button. The full ICAN report “Complicit: 2020 Global Nuclear Weapons Spending” can be found here. To see if you can divest from nuclear weapons manufacturing, check out Don’t Bank on the Bomb.