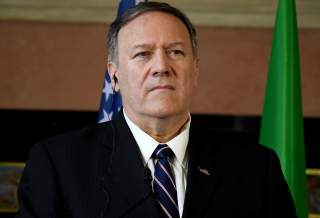 WASHINGTON-- For months, Foggy Bottom has been embroiled in a parlor game of sorts: Will the captain of the foreign policy ship, Secretary of State Mike Pompeo, jump overboard and run for U.S. Senate in his native Kansas, as establishment Republicans in the upper chamber have asked him to do?

The idea seemed farcical, at first. Why would the nation’s chief diplomat who has risen in the Trump era -- from Congressman to CIA chief to quite arguably the most powerful Cabinet official --  trade in those gains to become a junior senator? Pompeo is widely known to covet the presidency, perhaps as soon as 2024, the next open Republican nomination contest. Even if his boss, President Donald Trump, was to go down next fall or before then, the now-pedigreed Pompeo could simply raise money for two short years before the inevitable inception of the nominating contest.

But there are other factors at play. Unlike his predecessor, Rex W. Tillerson, Pompeo is a loyal soldier-- as the New Yorker’s Susan Glasser labeled him, “the Secretary of Trump.” But at his core, Pompeo is a syncretic figure. Pompeo did not endorse Trump during the 2016 primary; he favored neocon candidate Marco Rubio. But unlike NeverTrump intellectuals horrified by the New York mogul’s neo-Buchananite rise, Pompeo stayed in the conservative fold, serving as a surrogate for the Donald Trump general election campaign, and gleefully interviewing for a senior job after the shock victory of 2016.

Pompeo’s address this year to the Claremont Institute, the de facto intellectual home of Trumpism, and remarks last year to the German Marshall Fund in Brussels give a taste of his values. He clearly does not believe, as other Republicans hope, that Trump’s rise was all celebrity flash. The secretary views Trumpism as a more permanent political force, whatever becomes of its founder; Pompeo hopes to benefit from political primogeniture. At Claremont, as highlighted by estimable administration interlocutor Walter Russel Mead, Pompeo linked “America First” to the founding; he is, as Mead astutely noted, a “conservative internationalist” who believes “American engagement should be guided by a narrower focus on specific U.S. interests.”

At Brussels, Pompeo took a hatchet to a Trump-era bugbear, the “rules-based international order,” saying “multilateralism has too often become viewed as an end unto itself,” … The more treaties we sign, the safer we supposedly are.” Pompeo mocked: “The more bureaucrats we have, the better the job gets done.” His comments cleverly threaded the needle between Trumpian nationalists and most traditional, red tape-hating conservatives.

But there is another aspect to Pompeo’s profile. A politician’s pol, he has prudently stood betwixt dueling factions. But if forced to choose, it’s clear: Pompeo is still a man of the pre-Trump establishment. The West Point valedictorian, Harvard Law graduate and military equipment entrepreneur is a conservative in the mold of the Wall Street Journal editorial board. Put otherwise, Pompeo is Trump-curious, but traditional. Pompeo has even hired as a senior aide a WSJ alumnus, ex-Trump critic Mary Kissel, as well as neocons such as Elliot Abrams. As Mead noted about Pompeo’s Claremont address, “This is all very well, critics will say, but does Mr. Pompeo speak for his chief?”

That has long remained unclear, and may remain so. What’s clear: Pompeo’s continued flirtation with a Senate run, even in the face of other grandees in the race, such as the Peter Thiel-backed Kris W. Kobach, shows him to be a survivor with a keen eye for the escape hatch. Pompeo has always feared the unpredictable, risk-loving Trump could go down-- hence, the interest in the Senate seat. Also, if 2024 looks like poor terrain for Republican presidential candidates or his brand of “conservative internationalism,” the relatively young Pompeo could pick his spot from a cushy Senate seat.

But the scandal out of Ukraine that has subsumed the entire administration could force Pompeo to exit on more hasty, forced terms-- and even imperil his prospects to win the nomination and election in Kansas. The Washington Post on Friday called on Pompeo -- who listened in on the deeply controversial telephone call Trump held with the Ukranian president on July 25th -- to resign from his post.

Pompeo says he will not comply with House subpoenas related to the matter, and the administration says it’s on strong legal ground. After triumphing over then-National Security Advisor John R. Bolton, the prospect of a Pompeo exit seemed far less fanciful-- or at least, far away. But Ukrainegate has convulsed the American political scene.