Protesting the Bomb: How a Nun and Fellow Activists Breached the Y-2 National Security Complex 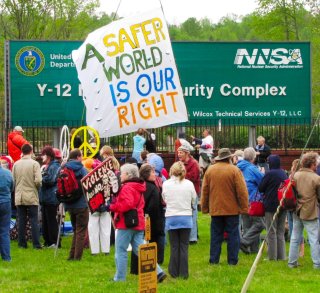 In 2012, Sister Megan Rice, Gregory Boertje-Obed, and Michael Walli entered the Y-12 National Security Complex using nothing but a pair of bolt cutters. It was remarkable, given the intense security surrounding the site, which stores all United States’ weapons-grade uranium.

The story behind those who trespassed onto the site—and the reasons they did so—is equally as remarkable.

On the latest episode of Press the Button, Helen Young joins co-host Michelle Dover to discuss the story of lay and religious activists in her film “The Nuns, the Priests, and the Bomb.” Young is an Emmy award-winning writer and producer who has dedicated her career to illuminating critical issues. She spent over twenty-five years working as a staff writer and producer on a number of network news and magazine broadcasts, including CBS.

Young says she was inspired to produce a film on nuclear weapons because of her “deep and abiding belief that this is probably the most serious security threat we're facing in the world right now, and unfortunately not too many people are aware of it.” The film follows two breaches of nuclear weapons facilities in the United States: the 2012 breach of the Y-12 National Nuclear Security Complex in Oak Ridge, Tennessee, and the action that inspired it, a protest at a U.S. naval base near Seattle just less than a year earlier.

The nuns and priests at the center of the film are members of the “Transform Now Plowshares” movement, a network of activists that came together in the early 1980s to advocate resistance to nuclear weapons and war. Their protests—referred to as “Plowshares actions” – are the result of a deliberative process, and often include civil disobedience. The Plowshares movement is not related to Ploughshares Fund.

The nun who led the Y-12 breach, Sister Megan Rice, passed away this fall at the age of ninety-one, having been arrested more than forty times for anti-weapons protests. Recounting a conversation she had with Sister Rice, Young says one of Rice’s motivating factors was the need she saw to do something dramatic, to really raise awareness, because people simply do not pay attention to the issue of nuclear weapons with the concern it deserves.

The Y-12 break-in triggered four congressional hearings, legal proceedings, and intense scrutiny of the site’s security practices. The U.S. government had spent millions of dollars in security systems and personnel to protect the site, and with all this security, how were three people able to go undetected for nearly thirty minutes?

The film highlights how much of the media coverage was on these security failures, and less on the reasons that the Plowshares group targeted the site, or their bravery entering a “shoot-to-kill” zone. Nonetheless, at the end of the day, Young notes “it was a great entree into telling the larger story.”

Young highlights, “there have been a hundred Plowshares actions and there has never been a violent incident, or no one's ever gotten hurt, because when these activists do go into these facilities, they take special care to bring their peace symbols, to bring their banners and to make it brutally honest, brutally obvious to whoever's there, that they are peace activists, they don't have any weapons.”

That said, Young stresses that the activists realize they are putting themselves at risk and are breaking the law. The film documents the considerable time and care the members take in planning their actions. Young explains the members of the Plowshares group “pray about it for a year. They discern and…they spend time together in contemplation of what they're about to do, and they do take it very seriously.” Through the film, the audience, like Young can truly get “to know these people… the depth of their conviction and their real concern for humanity.”

Having focused on myriad causes of international concern, Young knows that there are many issues to be passionate about and many issues to become involved in. She acknowledges, “many young people are engaged in the climate movement, which is wonderful.” But, she adds, “I always like to say, if there is a nuclear confrontation, we won't have a climate to protect.” So what can people do who want to get involved? The first step, Young says, is to become informed.

The entire interview with Helen Young is available here on Press the Button. You can find links to watch Helen Yong’s film “The Nuns, The Priest, and the Bomb” on her website and become informed on the issue of nuclear weapons.