The Real Question Coronavirus Hell Should Have Us All Asking 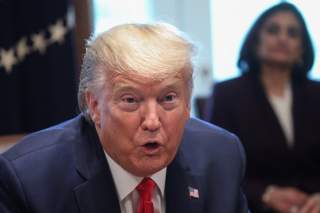 With cases now above 7,000  restaurants, bars, and entertainment establishments in America’s biggest cities closing for the foreseeable future, and the Trump administration eyeing a financial relief plan that could send $2,000 checks in the mail to most Americans, the coronavirus crisis sweeping the country and indeed the world is changing the way the entire planet is looking at public health. But with no sign that the number of new infections is even close to reaching peak levels, there is another conversation policymakers and lawmakers in Washington should be having: is U.S. taxpayer money being spent on the right things?

Granted, this is a question millions of Americans ask on a near-daily basis. Travel on a bumpy, dirt road in the state of Nebraska and you will likely wonder to yourself why public infrastructure is this country is in such poor shape. It’s the same question that pops into one’s mind when your train en route to Connecticut or Long Island inexplicably runs out of power.

The lack of prioritization, however, has a habit of sticking out like a sore thumb during times of crises—and unfortunately, only when the federal government's response is universally panned as embarrassing or human life is in jeopardy do the powers-that-be in the nation’s capital address the problem with the seriousness it deserves.

The Trump administration has received a fair share of criticism for its response to the public health disaster that is the coronavirus outbreak. Much of the criticism is completely justified. As has since become clear from the reporting, President Donald Trump treated coronavirus lackadaisically for far too long, as if the disease was a foreign contagion that would evaporate as soon as it crossed U.S. borders. It reportedly took the intervention of Fox News host Tucker Carlson for Trump to understand that COVID-19 is a very serious virus that had the potential to wipe out the American economy and kill untold numbers of people. From the severe shortage of basic medical equipment like respirators and masks to Trump himself fumbling the initial response, the federal government has failed the American people. And the stock market is reflecting it.

But despite what the media would like, Donald Trump is not the entire story. The story goes beyond one single individual or one single policy. The coronavirus crisis is a reflection of another pandemic, one more significant and systemic: a disturbing imbalance and misunderstanding within the U.S. government of national priorities.

Take the budget for the National Institutes of Health, for instance. The NIH is a consortium of research centers across the country designed to work on the very type of infectious disease outbreak the United States is currently struggling to manage. NIH is the crown jewel of medical research and analysis, providing financial resources to universities, medical schools, and hospitals from coast-to-coast and collaborating with other scientists on potential vaccines, cures, and treatments. The NIH budget in FY2020 clocked in at $40.5 billon. While this figure may seem high, the Pentagon spent $71 billion in its Overseas Contingency Operations account during the same year.

Or take the Center for Disease Control and Prevention, the agency responsible for detecting outbreaks and discovering ways to fight off pandemics. The FY2020 for the CDC was a little south of $8.4 billion. Compare this to the Trump administration’s budgetary request for the U.S. nuclear weapons enterprise, which consists of $17 billion. This ratio will be even more dramatic this year if Congress approves the White House’s request to cut $1.2 billion in funding for the CDC budget.

The Food and Drug Administration, tasked with approving new drugs and medicines to the market, is in even worst shape than their sister agencies in the Department of Health and Human Services. Washington authorized more cash in FY2020 for the Afghanistan National Security Forces Fund ($4.1 billion) than it did for the FDA ($3.1 billion). Viewed another way, the Pentagon spent nearly as much money in one month in 2018 ($61 billion) as the FDA, CDC, NIH, and Health Resources and Service Administration spent in the 2020 fiscal year, combined ($64.3 billion). The cost of two F-35A aircraft ($188 million) is nearly the same as the Trump administration’s FY2021 request for detecting and countering emerging infectious diseases ($197.5 million). Washington provided Egypt with more money in the form of military aid ($1.3 billion) in FY2020 than it  provided the NIH for breast cancer research ($768 million).

There are many lawmakers in Washington, D.C. who would take strong issue with the characterization above. Defense and health dollars are apples and oranges, they might say. Research and development into advanced weapons systems, after all, costs more than research into cancer or pandemics. But when all of the money is coming out of the same pot, one can’t simply dismiss the comparison as meaningless or obsolete.

Let the coronavirus infections now ravaging America serve as a wake-up call to the lawmakers of both parties in Washington, D.C. who appropriate the funds and the policymakers who administer them: if you don’t find the time to prioritize issues on the home-front or leave domestic agencies like the CDC underfunded, the nation will eventually pay for it.

Image: U.S. President Donald Trump meets with representatives of nurses organizations on coronavirus response as as Seema Verma, administrator of the Centers for Medicare & Medicaid Services, listens in the Cabinet Room of the White House in Washington, U.S., March 18, 2020. REUTERS/Leah Millis.