The Saudi Alliance Must Go 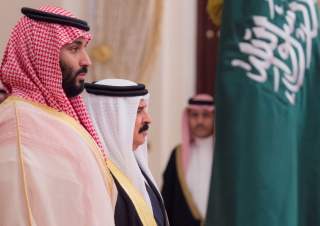 The Trump administration has vowed to stand by Saudi Arabian Crown Prince Mohammed bin Salman despite the House of Saud’s connection to the death of Jamal Khashoggi. However foreign policy experts sympathetic to Riyadh, such as former Secretary of State James A. Baker III, have cautioned that the United States must recognize the necessity of balancing the defense of democratic principles with the “substantial and abiding value of our strategic partnership with the Saudis.”

What Baker does not acknowledge is that the strategic value to the United States of the informal U.S.-Saudi alliance has taken a nosedive in recent decades.

Close ties with the Saudis served American geopolitical interests during the Cold War, but that conflict ended nearly thirty years ago. Is the relationship strategically beneficial today? From the perspective of oil security—by far the most important rationale for the U.S.-Saudi partnership—the answer is increasingly no.

Oil has, of course, always been the primary driver of the U.S.-Saudi relationship. Although pundits like to invoke the February 1945 meeting between President Roosevelt and King Ibn Saud aboard the USS Quincy as the beginning of a U.S.-Saudi “oil for security” alliance, in truth, robust security ties between the two countries did not emerge until the early 1970s, in response to a particular constellation of circumstances that no longer exist today.

Back then, the planned withdrawal of British forces from the Persian Gulf in 1971 threatened to create a power vacuum that Washington feared the Soviets would fill—either directly or through the reach of Soviet proxy states, like Iraq and Syria. American leaders understood that if the Soviet Union consolidated its influence over the entire region’s oil, it could blackmail the Free World by threatening to cut off petroleum access. Thus, it was imperative that the major oil-producing states in the Western sphere of influence—namely, Saudi Arabia, Iran, and the Gulf sheikdoms—remain outside the Soviet orbit.

The Soviet threat prompted President Richard Nixon to adopt the “Twin Pillars” strategy, whereby the United States would strengthen Iran and Saudi Arabia through arms sales and other military assistance so the two could jointly contain Soviet regional influence. Saudi Arabia, by far, was the junior partner; it received some $612 million in arms deals during Nixon’s tenure, compared to $7.6 billion in weapons deliveries to Iran.

As the discrepancy suggests, Saudi Arabia’s primary role was non-military. Rather, it was included in the strategy for the sake of appearances—to avoid angering the Arab states in the Gulf by relying solely on Iran, a non-Arab country. Only after the fall of the pro-U.S. Shah of Iran in 1979 did American military sales to the Saudis really take off. And only after Saddam Hussein invaded Kuwait in 1990 and directly threatened the Saudi border did the U.S. become the ultimate guarantor of Saudi Arabia’s security, and its oil, through Operation Desert Shield.

All of this is to say that the partnership between the United States and Saudi Arabia is neither as long nor as illustrious as commonly claimed. Rather, it arose from threats by two specific aggressors: the Soviet Union and Saddam Hussein’s Iraq—both of which no longer exist. Despite rampant threat inflation from the current administration, Iran lacks the military wherewithal to dominate the oil resources of the Gulf the way that the Soviet Union or 1990s Iraq could. Iran can make trouble for Saudi Arabia—witness its proxy war in Yemen—but it cannot seriously threaten Saudi territorial integrity. The Saudis, flush with oil cash, are entirely capable of deterring Iranian expansion on their own. It is not necessary for the U.S. to act as their security backstop.

Moreover, close ties to the House of Saud carry strategic costs in addition to the moral costs of whitewashing the misdeeds of a murderous regime. Let’s not forget that U.S. support for Saudi regime was one of the main grievances Osama bin Laden cited for launching terrorism against the American homeland. The Saudis also seem hell-bent on baiting the United States into a foolish and unnecessary military clash with Iran—to have America settle their local feud for them. And the aforementioned war in Yemen, where Saudi forces have used American-made weapons to commit barbarous acts against civilians, only undermines U.S. security by stoking the sort of anti-American sentiment that motivated nineteen hijackers—fifteen of them Saudis—to carry out the heinous 9/11 attacks.

As a realist, I wholeheartedly agree with Baker’s plea to weigh U.S. strategic interests alongside moral ones in dealing with the Saudis. Now, perhaps more than ever, both point to the exit.

Rosemary A. Kelanic is an Assistant Professor of Political Science at the University of Notre Dame and a contributor and co-editor, with Charles L. Glaser, of Crude Strategy: Rethinking the U.S. Military Commitment to Defend Persian Gulf Oil (Georgetown University Press, 2016).