The Saudis Need More than a Scolding on Yemen 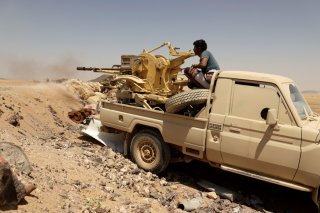 In the world of business, “under promise and over deliver” and you shall go far. The same holds true for the art of war. Saudi Crown Prince Muhammad bin Salman (MBS) flouted this golden rule in Yemen. Predictably, neither he nor the kingdom he leads has gotten very far.

Since the Yemeni conflict began in March 2015, the United States has acted like a bank, giving the Saudis a blank check to prosecute a war against the Houthis. Washington bolstered Riyadh’s efforts through intelligence-sharing, logistical support, targeting information, in-flight refueling, and billions of dollars’ worth of weapons. Six years later, the Saudis have failed to accomplish their initial objectives. The Houthi insurgents are still undefeated, and the official government of Yemen is still in tatters and exile. Instead, the Saudi war has thrown Yemen into a humanitarian crisis, with an estimated 230,000 people dead and another four million displaced. Riyadh has overdrawn on its bank account with the U.S. government. Like any responsible business lender—and world leader—it is high time the United States calls in the loan.

Adhering to popular sentiment and a campaign pledge, U.S. President Joe Biden announced in February that the Saudi crusade in Yemen had to “end.” To bring this ambition to fruition, he promised two initiatives. First, an end to “all American support for offensive operations,” including “relevant” arms sales. Second, the appointment of a special envoy to Yemen to broker a peace.

Since the announcement, the White House has offered few specifics on how it will reduce U.S. support for Riyadh’s war in Yemen. In fact, President Biden has created a policy incongruity by mentioning the attacks, strikes, and threats Saudi Arabia faces from “Iranian supplied forces in multiple countries,” which include the Houthis. In doing so, President Biden has also vowed to “help Saudi Arabia defend its sovereignty and its territorial integrity and its people.” There is a fine line between offensive and defensive support. The Biden administration will need to not only draw boundaries but also publicly articulate them. Most worryingly, the White House interprets its plan to end offensive operations and send an envoy as two separate entities. In fact, they are inter-connected initiatives. President Biden can negotiate a peace by explaining the end of Washington’s offensive involvement.

Light on the Details

Many facets of President Biden’s plan remain indeterminate. On February 25, forty-one congressional lawmakers asked the Biden administration a series of inquiries related to Yemen. They wanted to know the ways in which Washington still supports the Saudi offensive. What “activities” had the administration already terminated? How will the administration differentiate between offensive and defensive support? The letter, which requested a White House response by March 25, remains unanswered. Asked when lawmakers could expect a reply, one National Security Council (NSC) spokesperson said the administration was still “reviewing our policies.”

The time for a policy review elapsed the moment President Biden announced a new policy for the Yemeni war. A tacit censure of Saudi Arabia followed by no tangible alterations to U.S. support signals to Riyadh that the new “policy” is nothing more than a placatory gesture to a disgruntled American electorate. War can proceed as usual.

If the Biden administration is serious about ending America’s role in the war, it must determine and disclose the details of its withdrawal. It should cancel, not just freeze, weapons sales to Saudi Arabia and the United Arab Emirates. This includes precision-guided munitions and F-35 fighter jets. It should announce that it will no longer refuel Saudi or any coalition warplane, collect intelligence on the Houthis or target their positions, and provide maintenance for Royal Saudi Air Force assets that enable airstrikes within Yemen. It should identify U.S. initiatives that bolster the Saudi land, air, and sea blockade of Yemen—which offers no defensive value to Saudi Arabia—and end them. President Biden and his team should consider a temporary reduction of logistical support to the Royal Saudi Air Force and U.S. training of Saudi military forces. This change should occur when the byproducts of such support and training directly exacerbate the Yemeni war.

President Biden must also demarcate American parameters for future Saudi cooperation. He wants to end offensive support. Yet his administration pledges to “help defend Saudi Arabia, especially in light of continued Houthi cross-border attacks that target Saudi Arabia’s civilian infrastructure.” If the Houthis attack another Saudi oil station or airbase, when does Riyadh’s retaliation stop becoming a defensive deterrent and start becoming another offensive maneuver? President Biden must delineate and specify the defensive support he wants to maintain. He also must devise an integrity mechanism to pinpoint when such support crosses into the offensive realm.

President Biden paired the ambiguous halt to “offensive operations” with the appointment of Tim Lenderking as special envoy to Yemen. So far, the White House has viewed these as two parallel, but separate, initiatives. One of war, one of peace. One of coercing the Saudis to end the war; one of coaxing the Houthis to negotiate. To yield any positive outcome in Yemen, President Biden’s team must view these efforts as interdependent. Lessening the Saudi war effort by publicly disclosing and detailing America’s withdrawal from the Yemeni war will push the Houthis toward negotiation.

A few weeks ago, Riyadh presented a peace offer to the Houthis that stipulated a Yemeni-wide ceasefire and reopening of the Sana’a airport. The Houthis rebuffed the proposition—a slightly revamped version of a failed offer from a year before—because it offered “nothing new.”

The Houthis, however, refuse to take a seat at the negotiating table not because of a skimpy peace offer, but because they fear continued American and allied support for the Saudis. “Washington is still giving significant support to the Saudis,” Abdelmajid al-Hanash, a Houthi negotiator explained. “That’s why we’re still on guard and why we’re waiting to see if they intend to do anything concrete to end this aggression against us. Any negotiations will come after that.” Once President Biden outlines and executes his drawdown, his envoy could broker a peace deal.

Give Peace a Chance

In The Costs of Conversation, a book that examines when belligerents decide to fight and talk in war, scholar Oriana Skylar Mastro finds two factors that thwart unconditional negotiations. First, the “likelihood that the enemy will infer weakness from an open diplomatic posture.” Second, the “degree to which the enemy can prolong, intensify, or escalate its war effort in response.” How does this apply to the Houthis? The first criteria will never change. No matter the size or extent of their battlefield victories, the insurgents will never lose their underdog status against Riyadh and the coalition. The second criteria still applies. The Houthis need proof that the Saudis can no longer “intensify” or “escalate” the war effort. An end to America’s offensive support serves as such proof.

Thus, President Biden should determine, detail, and disclose the end of U.S. offensive actions in Yemen. Other coalition partners will follow Washington’s lead and withdraw their support as well. A reduced coalition will neuter the Saudi war effort, making their victory implausible. This will signal to the Houthis that the Saudis are in a genuine position to negotiate—regardless of what they initially offered. Most of all, these efforts can begin putting the war-torn state on a path to peace.

The views expressed in this article are those of the author and do not reflect the official policy or position of the U.S. Navy, the U.S. Department of Defense or the U.S. government.