There’s a Reason They Call It the 'Forever War' 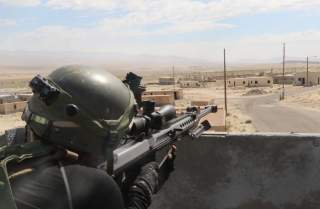 In recent weeks, some American troops have moved from Syria to Iraq. Airmen have moved from the United States to an airbase in the UAE, and up to two thousand more U.S. soldiers are headed to Saudi Arabia. All of this is on top of the continued presence in Syria, Iraq, Afghanistan, Somalia, Niger, elsewhere in Africa, and combat support operations in Yemen. President Donald Trump claims he’s ending “forever wars”—but his actions keep increasing the number of troops in the Middle East.

These deployments not only fail to improve America’s national security—they weaken it. Rather than rearrange where we station troops in the region, we need to withdraw them all.

After a phone call with Turkish president Tayyip Erdogan earlier this month, Trump unleashed chaos when he suddenly ordered U.S. troops in Syria to immediately disengage with their Kurdish partners and reposition south. Turkey almost immediately launched a military offensive into northern Syria to form what the country called a “safe zone” to defend against what Ankara says is terrorist infiltration from northern Syria.

While I will be the first to say that the way Trump handled this situation has been atrocious, his initial announcement that he was finally going to withdraw from Syria was the right move.

Former President Barack Obama intervened in Syria without Congressional authorization, and the mission was doomed to failure from the outset. Obama never gave the Pentagon a clearly defined, achievable military objective. Such clarity is essential for combat forces because, without clearly articulated criteria, there is no way to know whether or when the troops have accomplished their mission. Thus, they stay indefinitely.

To his credit, when Trump became the commander in chief in 2017, he did give the military an achievable objective: helping the Syrian Democratic Forces (SDF) oust the Islamic State from its Syrian “capital” of Raqqa. That mission was fully accomplished in October of 2017. At that point, Trump should have brought our troops back home. Instead, he allowed them to stay without any mission, doubling down on Obama’s mistake. The result was as predictable as it was pointless: mission creep.

The de facto mission soon became protecting the Kurds, “countering Iranian influence” (whatever that means) and preventing the re-emergence of ISIS. There are many problems with these objectives, but from a military perspective, they all suffer from the same malady: there is no criteria by which success or failure could ever be judged. Once again, that means the mission can never be successfully accomplished—and so can never end.

Unfortunately, it appears that Trump is more interested in a shell game of shuffling troops around in the Middle East than in ending any “forever wars.”

After Trump declared in early October he would withdraw all U.S. troops from Syria, Secretary of Defense Mark Esper said, to the contrary, some troops would stay and others would be sent to Iraq. Then, in a bombshell announcement that Friday, Esper revealed the Pentagon was preparing to send American armor into southeastern Syria to defend Syrian oil fields. Trump confirmed the plan at a press conference the following Sunday.

As a former armor officer, I can tell you that if this deployment happens, it will not be small. The number of tanks required to defend the oil fields and the force itself will be significant. Tanks drink an enormous amount of fuel and require considerable maintenance, and the units will require frequent logistical resupply runs.

I fought with a tank unit in Desert Storm and observed the labor-intensive resupply operations we conducted for isolated posts in Afghanistan. Even routine resupply operations are resource-intensive, labor-intensive, and vulnerable to enemy attacks. Positioning U.S. forces to protect Syrian oil would incur enormous risk for absolutely no gain to America—but this same charge is applicable to virtually all our combat deployments in the Middle East.

Earlier this month, the Air Force announced the deployment of an F15 Strike Eagle squadron from their home base in England to the UAE. Trump has now ordered several rounds of soldiers and airmen to Saudi Arabia. And since earlier this year, the United States has increased the number of troops in the Middle East by about fourteen thousand. At any given time, there are between forty-five thousand and sixty thousand U.S. service members in the region. There is no risk to American security in the region that comes close to justifying so many deployed troops.

Despite his promises, Trump has not ended a single conflict he inherited and has instead increased the number of American troops in the Middle East. If he sends tanks to Syria, then that number will only rise further.

None of these deployments are necessary for our security or prosperity. But Trump can reverse this negative situation by fully withdrawing from Syria, bringing all the troops home from Iraq, and ending U.S. support for the destructive Saudi-led intervention in the civil war in Yemen. We can continue to monitor ISIS and similar threats from a distance with our powerful global strike capabilities—as was powerfully demonstrated in the raid that brought down ISIS leader al-Baghdadi.

These combat deployments are not necessary for our security and allow regimes in Baghdad, Damascus, and Istanbul to use American troops and assets for their own security. It’s time to stop playing a shell game with the U.S. military in the Middle East and bring them home.