Three Reasons Not to Leave the INF Treaty 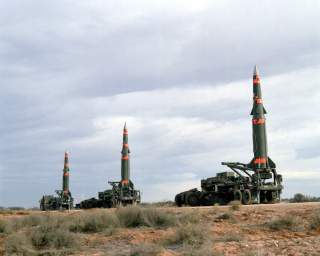 President Donald Trump’s announcement that he intends to withdraw from the Intermediate-Range Nuclear Forces (INF) Treaty was cast in contractual logic: the U.S.-Russian agreement prohibits land-based short-and-intermediate-range ballistic and cruise missiles, both nuclear and conventional, which are difficult to track and make unintentional nuclear war more likely. Washington, with support from the North Atlantic Treaty Organization, alleges that Moscow has breached that ban, and, as Trump put it, “we’re not going to let them violate a nuclear agreement and go out and do weapons and we’re not allowed to.”

If Russia has violated the deal, why should America maintain it? While there is a good reason to think National Security Advisor John Bolton would want out of the INF Treaty regardless of Russian compliance—he has argued as much in the past—the basic logic of leaving an already broken treaty seems straightforward. Nevertheless, there are three strategic reasons to proceed with extreme caution.

The first question to raise is: what are the actual effects that withdrawal will have on U.S.-Russian relations? The Kremlin denies violation of the treaty and has accused the United States of breaking the deal in turn. This dispute will not be settled by American exit. Neither side will get the arms reduction from which they both derive strategic balance and benefit. Instead, we’ll likely see an escalation, as Washington and Moscow alike, newly freed from INF constraints, begin a fresh weapons buildup. Trump’s comments made clear he would like to be “allowed” to “go out and do weapons” of this sort, and Russia announced on October 22 that it would do the same for the sake of “balance” and “strategic security”"

Assuming U.S. allegations are correct, INF enforcement has not been perfect, and past talks on the subject have made little progress. Still, the treaty clearly has some teeth left. It is functioning as a force of restraint and security for U.S. European allies. Scrapping the whole thing—which even Bolton has acknowledged has historically been “one of the few arms-control agreements to be effectively implemented, verified, and enforced”—runs a genuine risk of sparking the arms race then-President Ronald Reagan sought to forestall when he signed the treaty in 1987.

There is no guarantee such a discussion would succeed, but it has the merit of building on three decades of success backed by enforcement mechanisms that fall by the wayside if America leaves the treaty. Keeping the INF deal gives the United States a far stronger tactical position than the one in which Americans will find themselves if Washington decides to start from scratch. Imperfect compliance is preferable to having no rules all around, and the objectionable Russian missile activity that has raised this question of withdrawal will only accelerate after America’s exit. It could also prompt a retaliatory Russian withdrawal from other agreements—something that has happened before. This outcome is why U.S. European allies vehemently oppose American withdrawal from the treaty. European NATO members know they will be in the range of all the new missiles and that America’s departure would allow and encourage Moscow to build more.

Next, the United States must consider Bolton’s primary rationale for exiting the INF deal, which is that it does not include other major powers—most notably China. “To reduce the threat from INF-range missiles, we must either expand the INF Treaty’s membership or abrogate it entirely so that we can rebuild our own deterrent capabilities,” he has argued, now evidently opting for the latter. Rand acknowledged this, noting that he is “all for trying to sign an agreement with China, but that would have to be a brand-new agreement. It’s no reason to end the agreement we have with Russia.”

Pursuing a comparable deal with China may be worthwhile, though it is unlikely to go far at present given trade war tensions. But crucially, the absence of such a treaty does not put the United States at significant risk. Beyond America’s overwhelming conventional and nuclear advantages, the missiles the INF deal controls could not reach the U.S. mainland from China—in fact, historically Moscow has been more concerned than Washington about Chinese stockpiles of this sort. Moreover, India and other nearby nations that are in Beijing’s range have not petitioned the United States to withdraw from the INF on their behalf. This is because an INF-style agreement with China is more a nice-to-have for U.S. closest allies in East Asia.

The third—and arguably most strategically significant reason in the long term—to avoid a hasty exit from the INF Treaty is what it communicates about the United States as a negotiator. This is not to say there are no circumstances under which Washington should exit an agreement when America’s partner is not in compliance. Certainly, there are. But reliability matters, too, particularly when dealing with an issue as serious as nuclear stockpiles.

Leaving the INF Treaty would make other nations less willing to deal with Washington in the future, as it suggests a changeability that is poisonous to effective diplomacy. If so, venerable an agreement can go at any minute under disputed circumstances, why bother talking at all?

For thirty years, the INF Treaty has mostly worked. In addition, unlike more recent deals implemented entirely within the executive branch and thus subject to easy change by the next administration, it was properly ratified by the Senate. This has been a durable and productive pact and leaving it will not make Moscow stop developing short-and intermediate-range missiles. It will do exactly the opposite. Nor will it limit Chinese arms production, as China is not a party to the current deal. What it will do is risk a costly, new arms race America’s debt-ridden government cannot afford and undermine the United States’ diplomatic aims in incalculable ways for years to come. Rushing out the door is neither wise nor safe.

Bonnie Kristian is a fellow at Defense Priorities and weekend editor at The Week. Her writing has also appeared at Time Magazine, CNN, Politico, USA Today, the Los Angeles Times, Relevant Magazine, The Hill, and The American Conservative, among other outlets.