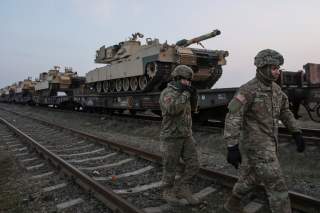 On August 13, President Trump traveled to Fort Drum, a U.S. military base in upstate New York to sign the 2019 National Defense Authorization Act (NDAA). This legislation authorizes $717 billion in defense spending, an increase of more than $20 billion from the 2018 NDAA passed in December of last year. In fiscal year 2017, defense spending totaled just north of $600 billion, a nearly 20 percent increase in funding in the past few years.

Despite the massive increase in funding it is receiving, the Pentagon has simply ignored various policy proposals that would make the agency more efficient and save taxpayers billions. For instance, over $2 billion could be saved by implementing roughly thirty reforms proposed by the Department of Defense inspector general (DoD OIG), outlined in a March 2018 report.

While the Pentagon gets increased funding every year, it merely ignores requests to make changes that would improve its efficiency and fiscal stability. Defense hawks push these massive increases in spending year over year, but it’s hard to defend them when thousands of cost-saving measures are available and waiting for DoD implementation.

The reforms recommended by the DoD OIG aren’t difficult to find, as the five-hundred-page report lists and prioritizes them. Some of the high-priority recommendations include recouping improper payments from contractors for incorrect labor costs and fixing management oversight in medical centers. Each proposal is pages long, with detailed insight on the various suggestions.

The Institute for Spending Reform has also found and compiled proposals from the Government Accountability Office (GAO), the Congressional Budget Office (CBO), members of Congress, and defense-policy experts. With over eighty proposals in six different categories, the compilation of ideas in Guide for a Strong America is another resource for the Trump administration and members of Congress to use when debating spending levels.

Proposals such as improving the DoD’s surplus equipment disposal procedures would save several million dollars while limiting increases in basic pay would result in hundreds of billions in savings over the decade. These ideas may not be popular with everyone, but debating them is necessary if Americans want to slow the growth of military spending in the long-term. Unfortunately, that’s seeming less and less likely.

Additionally, Vice President Mike Pence has now outlined a plan for implementing the U.S. Space Force by 2020—a new separate, sixth branch of the military. With no current cost estimate, nobody knows how much this will increase spending at the Pentagon, but it surely won’t be cheap. Already, members of Congress are proposing building space weapons, without any indication whether they will be successful, are necessary, or that the Pentagon even wants them. Expensive new weapons projects should at least be proven to work before funding is allocated.

There is some good news. This year, the Pentagon will undergo an audit for the first time in the agency’s history, something that should make taxpayers happy. Already, the Navy is cutting costs

by entering data in a more automated and detailed format which is saving millions of dollars. These reforms may be a drop in the $700 billion military budget, but they represent a genuine step toward fiscal responsibility.

If the DoD determined that all of the money it is awarded is necessary to protect the United States from foreign invaders, that would be one thing. Nobody who is advocating for cuts to the Pentagon wants to undercut America’s security. However, Americans do insist that their policymakers should weigh the pros and cons of different programs and determine which are efficient, which need to be improved, and which can be cut or eliminated. Let’s implement basic cost-cutting proposals before settling for throwing more money at the federal government's largest agency and pretending that more dollars always equal more safety.

The safety of Americans should be the Pentagon’s number one priority, but acting as good stewards of taxpayer money should not conflict with this goal.

Jake Grant is the Outreach Director for the Coalition to Reduce Spending and a contributor to Young Voices. The views expressed are his own and do not necessarily represent the views of his employer. Follow him on Twitter at @thejakegrant.