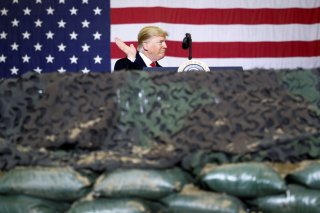 This Friday marks the anniversary of George Bush’s ill-advised and ill-fated “shock and awe” war of 2003. That campaign, Bush sternly told the American people, was to “disarm Iraq, to free its people and to defend the world from grave danger.” The reality, however, has been almost the opposite: seventeen-years-and-counting of a war that has thus far cost America thousands of troops killed, tens of thousands wounded, and hundreds of thousands who suffered post-traumatic stress disorder and traumatic brain injuries.

The disturbing truth, as is now well known, is that the egregious price in blood and treasure this war has imposed upon our Armed Forces–and continues to impose–was not necessary in 2003 to keep us safe, and has in fact made Americans less safe in the intervening seventeen years. For the good of our country and for the preservation of our service members, all troops should be expeditiously withdrawn from Iraq.

Every American should be asking their elected leaders why, for nearly two decades, they refused to do the right thing and end the war.

Part of the reason for Congress’s unwillingness has been the unrepentant advocacy to stay made by the very architects of the disaster. Retired Army Gen. David Petraeus, for example, might be the single most ardent advocate for staying in Iraq, causing others to ignore painfully obvious reality.

Before Bush left office in January 2009, he signed a status of forces agreement with Iraq’s then-Prime Minister Nouri al-Maliki putting an expiration date on American troops’ presence in Iraq—December 31, 2011. The political and social mood in Iraq was strongly against the continuation of the American occupation once Barack Obama took office, and the Iraqi parliament refused to ratify any agreement to extend U.S. troops beyond that date.

In a 2010 senate hearing, Sen. John McCain (R-Ariz.) had asked Petraeus if he believed the United States could, “begin a drawdown in July of 2011 under the projected plans that we have?” Petraeus answered succinctly: “That is the policy, and I support it.” Until he didn’t.

In January 2020, Petraeus wrote an op-ed in the Wall Street Journal in which he revised his previous view and wrote the withdrawal in 2011 was “ill-advised,” citing the ascendance of ISIS. That claim, however, is undercut by what actually happened.

Maliki, a Shia, clearly used the U.S. military to do what his own troops were incapable of, and that was quelling the insurgency to a manageable level. His reasons for refusing to extend the U.S. force presence, however, were exposed the day after the last of our troops withdrew: he had his chief political opponent–the Sunni Vice President Tariq al-Hashimi, arrested.

Once our troops were a hindrance to him, Maliki gave us the boot and did as he pleased.  In the months after our withdrawal, Maliki continued his self-serving actions of purging yet more Sunnis from his government and military, but when it had its logical result–the angering of the Sunni minority population, the gutting of the military (by replacing military-trained officers with political appointees who had no military knowledge or experience), which directly led to the rise of ISIS–he suddenly again begged U.S. troops to come rescue his government. We’re still seeing the rotten fruit of continuing to conflate U.S. security with Baghdad’s incompetence.

If Maliki hadn’t used our troops’ efforts to purge his political opponents, ISIS would never have arisen in Iraq. If he hadn’t elevated Shia militias to defeat the Sunni-backed ISIS, Iran would never have had such direct access to Iraqi politicians.  Had Iran not had such a free hand militarily in Iraq, our troops would not have been targeted by Iran-backed militias and U.S. troops killed in December 2019. Had we not killed Iranian general Soleimani in retaliation, the two American service members would not have been killed last week in the twenty-third rocket attack against American troops since last October.

Every day we remain in Iraq is another day we risk losing American troops for no gain to our country. There are no U.S. security interests in Iraq for us to secure.

Once again, Iraqi politicians are seeking to force our military out of their country and Shia militias reiterate their vow to continue trying to kill our troops. As long as we maintain a military footprint in Iraq, this perpetual cycle of violence against our troops and political dysfunction in Baghdad will never end because it cannot be resolved by military power.

The only course of action that makes any sense now is to get our troops out of Iraq and continue protecting our homeland via our unparalleled ability to project power globally against any direct threat to our country. Iraq’s internal disputes are not our concern. We should make sure that the seventeenth anniversary of the invasion of Iraq is the last one observed with U.S. troops in the country.