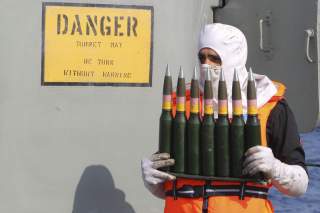 President Trump’s widely anticipated address to the nation on the growing crisis with Iran contained few surprises and even fewer worthwhile observations or proposals.  Instead, it was largely a regurgitation of long-standing hawkish allegations and demands.  Indeed, Trump began his speech with the stale refrain that Iran will never be allowed to have a nuclear weapon.  From there, he proceeded to recite a lengthy litany of familiar allegations about Tehran’s behavior: Iran as the world’s leading state sponsor of terrorism; Iran fomenting civil wars and undermining peaceful governments throughout the Middle East; Iran being responsible for the deaths of Americans in Iraq and elsewhere.

The president followed those accusations with an offer to commence negotiations on a new nuclear deal to replace the multilateral Joint Comprehensive Plan of Action (the existing agreement that Trump sabotaged). The broader proffered carrot was an end to U.S. and international economic sanctions if Tehran would only capitulate on Washington’s demands. However, the immediate, substantive U.S. action the president announced would move the needle in the opposite direction, with the imposition of new sanctions, accompanied by a thinly veiled demand that America’s European allies (as well as Russia and China) support those measures. His call on NATO, the world’s strongest military alliance, to become more deeply involved in the Middle East was hardly calculated to ease Iranian worries either.

There is little prospect that Trump’s policy will improve Washington’s already hostile relations with Tehran. Indeed, continuing to portray Iran as the Middle East’s arch-villain is both misleading and counterproductive. All of Trump’s allegations were either half-truths or outright falsehoods. Iran is not the world’s principal state sponsor of terrorism; that dubious distinction belongs to Saudi Arabia. 15 of the 19 terrorist hijackers on 9-11 were Saudi nationals, and several Saudi officials had dubious ties to Al Qaeda. Not a single hijacker was Iranian, and no credible evidence has emerged that Tehran had any connection to the attack.Since then, Riyadh has backed extremist Sunni factions in Iraq, Syria, and other countries. Indeed, Saudi Arabia and its allies funded and equipped some of the factions that ultimately coalesced to form ISIS.

Similarly, Trump’s accusation that Tehran has fomented civil wars in such countries as Syria and Yemen turns reality on its head. Saudi Arabia, along with Turkey and Qatar, has orchestrated the effort by Sunni insurgents in Syria to overthrow the government of Bashar al-Assad, a close Iranian ally. Because of Washington’s intense antipathy toward Iran, both the Obama and Trump administrations supported the anti-Assad campaign, helping to plunge Syria into a bloody civil war and to perpetuate that tragedy. Blaming Iran for the horrors in Yemen is even a more outrageous falsehood. The humanitarian crisis in that country is due largely to the Saudi-led atrocity-ridden war of aggression, which the United States has actively assisted despite overwhelming evidence of Saudi war crimes.

Even the allegation that Iran has been responsible for the deaths of “hundreds” of Americans in the Middle East (primarily in Iraq) has largely been debunked. None of the attacks, including the devastating carnage resulting from improvised explosive devices (IEDs), would have occurred if the United States had not invaded and occupied that country to overthrow Saddam Hussein. There were at least as many Sunni fighters as there were Iranian-backed Shias in the subsequent insurgency, and contrary to the hawkish narrative, many of those groups were perfectly capable of manufacturing and deploying IEDs without Iranian assistance.

Trump and his advisers have thoroughly mismanaged relations with Iran. The earlier assassination of General Qassem Soleimani was especially dangerous and provocative. Doing so on Iraqi territory when he was there at the invitation of the Iraqi government to discuss a new peace feeler from Saudi Arabia, was clumsy beyond belief. Indeed, it created suspicions that the United States deliberately seeks to maintain turmoil in the Middle East to justify America’s intrusive military presence in the region.

Killing Soleimani (as well as at least two Iraqi political leaders) understandably have provoked Baghdad. Massive anti-U.S. demonstrations have erupted in Baghdad, and the Iraqi parliament proceeded to pass a resolution calling on Prime Minister Adel Abdul Mahdi to expel U.S. forces. The legislature has a vote scheduled for January 12 on a law to mandate that step. Trump’s boorish reaction to the possibility that Baghdad might order U.S. troops to leave was akin to a foreign policy temper tantrum. He threatened America’s supposed ally with harsh economic sanctions if it took that step, virtually guaranteeing that Iraq would cooperate even more closely with Iran.

Media accounts convey a sense of relief that the January 7 Iranian missile strikes on two sprawling Iraqi bases housing American forces appeared to have been more of a propaganda display to placate domestic opinion than a serious effort to inflict damage. Indeed, it seemed calculated to avoid killing American personnel.  Critics note that there were other official U.S. installations throughout the Middle East that were both more vulnerable and valuable if Iran had wanted to strike a truly damaging blow.

By confining itself to a mostly symbolic gesture, perhaps Iran was signaling a desire to de-escalate the confrontation. But it is also possible that this was a final shot across the bow, warning the United States to back off or the next attack would be far more serious.  Even if Tehran did signal a wish to de-escalate and commence a new bilateral dialogue, Trump’s response was not helpful. Repeating shrill, exaggerated accusations and demanding Tehran’s capitulation is not showing an off-ramp from the road to a disastrous collision. It was more akin to continuing a game of military chicken with the growing risk of a head-on collision.  America should be looking for its own off-ramp.