Trump’s Critics Show Their Own Sterile Thinking about Foreign Policy 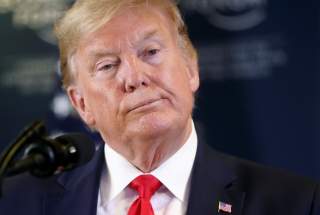 Most members of the mainstream media have bought into the conventional wisdom about U.S. foreign policy—so much so, that they regard individuals who dispute the dominant narrative as being guilty of sacrilege. Indeed, much of the anger that journalists direct against President Donald Trump is because he expressed heretical views about America’s military alliances, free trade, regime-change wars, and other components of the globalist-interventionist orthodoxy that has governed Washington’s approach to world affairs since World War II.

Media assessments of Trump’s foreign policy competence and performance are laced with contempt. A prominent example is a new book, A Very Stable Genius: Donald J. Trump’s Testing of America, written by Washington Post reporters Carol D. Leonnig and Philip Rucker. In a pre-publication article (based on the book) that appeared in the Post on January 17, the authors’ reverence for establishment foreign policy and military professionals, and the views they embody, oozes from nearly every paragraph.

The authors seem to share the sneering, condescending attitude of their favored protagonists about the commander-in-chief. “Trump organized his unorthodox worldview under the simplistic banner of ‘America First,’ but Mattis, Tillerson, and Cohn feared his proposals were rash, barely considered, and a danger to America’s superpower standing.” Consequently, on July 20, 2017, Mattis invited Trump to the Tank [the ultra-secure Pentagon room for discussing highly classified matters] “for what he, Tillerson, and Cohn had carefully organized as a tailored tutorial.” Much to the dismay of those officials, the session did not go as anticipated.  The meeting “was a turning point in Trump’s presidency. Rather than getting him to appreciate America’s traditional role and alliances, Trump began to tune out and eventually push away the experts who believed their duty was to protect the country by restraining his more dangerous impulses.”

Those experts also acted as though their duty was to prevent the president from making any significant changes to entrenched features of U.S. foreign and national security policies, however questionable those features might be. The authors should have acknowledged that point, if they weren’t cheerleaders themselves for those same policies.  Instead, they favorably mentioned that the Secretary of Defense tried to use terms “the impatient president, schooled in real estate, would appreciate impressing upon him the value of U.S. investments abroad.”  Specifically, Mattis “sought to explain why U.S. troops were deployed in so many regions and why America’s safety hinged on a complex web of trade deals, alliances, and bases across the globe.”

Leonnig and Rucker gave no indication that they harbored even the slightest doubt that such assumptions reflected indisputable reality. Their undertone of sympathy about the daunting task Mattis and the other supposedly sensible advisers faced in trying to educate a know-nothing president pervades their article. “For the next 90 minutes, Mattis, Tillerson, and Cohn took turns trying to emphasize their points, pointing to their charts and diagrams. They showed where U.S. personnel were positioned, at military bases, CIA stations, and embassies, and how U.S. deployments fended off the threats of terror cells, nuclear blasts, and destabilizing enemies in places including Afghanistan, Iran, Iraq, the Korea Peninsula, and Syria.”

Leonnig and Rucker believed that Mattis had made an especially devastating rebuttal to the president’s criticism of the continuing lack of financial burden-sharing in NATO. He emphasized that throughout the Cold War NATO “was not serving only to protect western Europe. It protected America, too.” That continuing transatlantic security solidarity “’is what keeps us safe,’ Mattis said.”

The Defense Secretary’s formulation was painfully simplistic even with respect to the Cold War era; scholars have shown that the U.S. security shield was far more important to Western Europe than any military contribution the NATO partners made was to U.S. security. In the post-cold war period, when the Alliance has added an assortment of vulnerable mini-states, such as the Baltic republics, Montenegro, and Slovenia, it is even more difficult to make the case that NATO is what keeps America safe.  But there was nothing in the Leonnig and Rucker article that showed any awareness on their part about the controversy among respected scholars regarding NATO’s relevance and value.

The authors seemed even more horrified that Trump demanded an explanation for why the United States hadn’t won in Afghanistan, some 16 years after the U.S. began fighting there in the wake of the 9/11 attacks. “Trump unleashed his disdain, calling Afghanistan a ‘loser war.’ That phrase hung in the air and disgusted not only the military leaders at the table but also the men and women in uniform sitting along the back wall behind their principals. They all were sworn to obey their commander in chief’s commands, and here he was calling the war they had been fighting a loser war.”

Given that the Post itself had recently published voluminous documents (the so-called Afghanistan papers) which showed how U.S. civilian and military officials in the Bush, Obama, and Trump administrations had systematically lied about supposed U.S. progress in that conflict, one might have thought that two other Post reporters would have adopted a more balanced, restrained perspective.  Instead, they fawned over the hurt feelings of the advisers who were offended by Trump’s candid, accurate assessment.

It is not that the Leonnig-Rucker account is entirely worthless. Trump’s volatile, abrasive personality comes through clearly on several occasions, and some of his comments would make any reasonable person wince—as when he referred to the military leaders assembled in the Tank as “dopes and babies.” Indeed, the unfortunate identification of his “America First” policy with a new policy truly based on realism and restraint may set back a badly needed reassessment of the current overextended and dysfunctional U.S. foreign policy a generation or more.

However, in their account, Leonnig and Rucker inadvertently reveal their own huge blind spots and unexamined assumptions. Such an uncritical treatment of the conventional wisdom that Trump’s advisers spouted throughout the 2017 Pentagon meeting epitomizes the sterile group think on foreign policy that continues to dominate the American news media.

Ted Galen Carpenter, a senior fellow in security studies at the Cato Institute and a contributing editor at the National Interest, is the author of 12 books and more than 850 articles on international affairs.  His latest book is NATO: The Dangerous Dinosaur (2019).