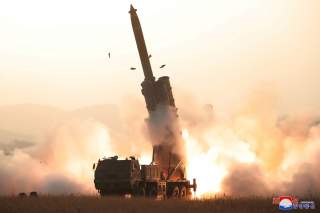 President Donald Trump has boasted he alone was able to bring reclusive North Korean leader Kim Jong-un to the negotiating table and has often cited the cessation of long-range missile and nuclear warhead testing as evidence of his success. North Korea, however, says it has been “betrayed” by Trump due to the lack of negotiations progress—and if there is no change in U.S. policy by the end of the year, then the Hermit Kingdom will no longer feel bound to its moratorium on testing.

In other words, if Trump doesn’t quickly reengage with North Korea diplomatically, then the year 2020 could end up looking a lot like the days of “fire and fury” in 2017 and the risk of destructive war will again rear its ugly head.

There is still time, however, to avoid unnecessary escalation. Last Thursday, North Korean state media announced that the United States has proposed a new round of working-level negotiations in December. Secretary of Defense Mark Esper followed up on Friday saying the United States would be “flexible” on future joint military exercises with South Korea—exercises the North views as antagonistic—if that facilitates the diplomatic track.

The use of joint drills is not only deterrence, Esper said, but also “to ensure that we do not close any doors that may allow forward progress on the diplomatic front.” Following Trump’s historic summit with Kim in Singapore in 2018, it appeared that the two sides were moving towards an agreement that could increase the chance for peace between the two sides that are still technically still at war. The big chance for a substantive breakthrough was lost, however, when talks deteriorated at the Hanoi summit earlier this year.

Heading into that summit in February, hopes were high that the two leaders would emerge from their two-day meetings with at least symbolic agreements laying the groundwork for more substantive negotiations during the year. A senior South Korean government official I spoke to in Hanoi prior to the second day’s meetings was excited about the prospect of continuing the momentum with a new Moon-Kim summit within weeks. Instead, then-National Security Advisor John Bolton appears to have convinced Trump to hold out for a major concession from Kim, and instead walked away empty-handed.

Kim was angry at the absence of any progress in Hanoi and for months afterward had virtually no contact with the United States. There was a small reprieve in late June when Trump unexpectedly met with Kim at the DMZ separating the two Koreas. “This has a lot of significance,” Kim told reporters, “because it means that we want to bring an end to the unpleasant past and try to create a new future.” Yet this opening, too, was not followed up with substantive diplomatic action and the situation continued to fester.

Kim began signaling his displeasure by conducting a number of tactical missile tests, intending to spur Trump to reengage negotiations. Pyongyang is in desperate need to get at least some sanctions lifted and is willing to engage in step-for-step diplomacy with Washington. The key thing for Trump and his senior advisors to recognize is that peace with North Korea is possible and a reduction of the threat from Kim is attainable.

It is not possible, however, to go back to the Bolton penchant of seeking full denuclearization up-front before any sanctions are relieved. If U.S. diplomats return to negotiations and demand that Kim dismantle his nuclear arsenal before any pressure is removed, then the talks will again collapse, and it is likely that Kim will make good on his threats to resume long-range missile testing and potentially even conduct a new above-ground nuclear test.

There is little the Kim regime has done over the past several years that it did not first publicly signal beforehand and there is no reason to believe they would not make good on current threats. But this situation can be avoided with a sober and rational strategy from Washington.

The good news for Americans is that U.S. security can be guaranteed by the country’s current deterrence. Even if Kim returns to more provocative testing, he can still be firmly deterred from ever launching anything more than a test missile because he knows, correctly, that were he to ever launch an actual attack against the United States, Japan, or South Korea, then the U.S. military would unleash an overwhelming counter-strike and likely destroy his regime. That knowledge will keep him deterred.

It must be understood that Kim views regime survival as key and sees his nuclear arsenal as the sole guarantor of North Korea’s existence. In other words, demanding full up-front denuclearization is a proven dead-end for negotiations.

Yet there is a better, less risky path for deterrence and that is targeted sanctions relief in exchange for specific actions on Pyongyang’s part, leading to a reduction in tensions and an increase in inter-Korean relations. No one is more invested in seeking peace than South Korea, and no one would stand to benefit more economically than North Korea.

Steps that lead towards peace make it less and less likely that the United States would ever have to demonstrate its ability to destroy Kim’s regime. In the best-case scenario, it would likely take a decade or more before North Korea feels secure enough to fully denuclearize. But every step taken to reduce tensions increases the chance that peace is ultimately achieved. America’s greatest objective is to avoid unnecessary war while preserving its freedom and ability to prosper economically. Unblinking deterrence, supported by smart diplomacy, gives America the best chance at achieving that goal.