The Trump-Kim Meeting is Not Like Nixon Opening China 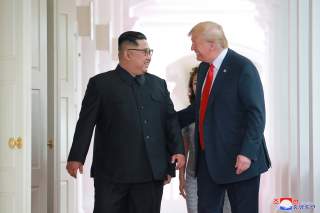 Last month President Donald Trump met North Korean leader Kim Jong-un in Singapore. The resulting “Sentosa Declaration” was disappointingly thin. As many observed, its protocols were little different than many previous declarations from North Korea with South Korea, the United States, or other actors in the international community. There is no timetable for denuclearization, no list or inventory of what the North Koreans possess, no detailed next steps, and so on.

Perhaps most disappointingly, after months of Trump administration hype about CVID—the complete, verifiable, irreversible disarmament/denuclearization of North Korea—Sentosa omitted the “V” and the “I.” When Secretary of State Mike Pompeo was asked about this, he irritably replied that these elements were “understood.” This is, unfortunately, not likely the case. If there is one thing we know about negotiating with North Korea after several decades, it is that if Pyongyang does not put something in writing, then it will use every loophole to avoid an “understood” commitment. This was a political, not empirical, statement by the secretary.

The South Koreans are now strongly encouraging the American side to drop the CVID language for a longer, more complex process of détente, which will take years. Pompeo has hence thrown out a new acronym: FFVD—final, fully verifiable denuclearization. It is not clear quite how this differs from CVID, but ultimately all this confusion only indicates just how long the process with North Korea will take. Just a few months ago, the Singapore meeting would supposedly win Trump a Nobel Prize. Today it is increasingly clear that Singapore was mostly a propaganda coup for the North, with little for the democratic side.

Defenders have responded to this by noting that President Richard Nixon met Chinese supremo Mao Zedong in 1972 in a similarly unstructured “fishing trip.” Nixon met Mao with few preconditions, and the resulting communique was long on principle and short on detail, much like Sentosa. The meeting kicked off a rolling, Cold War détente process with the People’s Republic of China, much as the Trump-Kim summit was hoped to do.

While there are indeed similarities, I would argue that the differences significantly undercut the analogy to Trump’s discredit:

1. Nixon’s trip was actually meticulously planned; Trump’s trip was thrown together at the last minute—and it really showed.

One argument defending Trump-Kim is that Trump went to Singapore just as Nixon went to China—both hopeful that a bold move would break-up sclerotic stalemates and patterns. This is somewhat true, but Nixon took the process far more seriously. Nixon and his National Security Advisor Henry Kissinger spent years thinking about opening China, and Kissinger went secretly to Beijing seven months beforehand to start laying the groundwork. Nixon and his wife Pat spent a week. The First Lady toured while her husband held in-depth negotiations.

Trump, by contrast, simply winged it in Singapore. Even three weeks beforehand, it was not even clear the meeting would even happen. Trump did not prepare. He did not read or study up. His staff prepared a odd pseudo-movie trailer to show Kim Jong-un. Trump unnecessarily saluted a North Korean general. He gave a bizarre press conference on little sleep in which he unnecessarily gave away U.S.-South Korea military exercises—even though the North Koreans had said earlier in the year that milex would not slow détente—and floated a removal of U.S. forces from Korea. The North Koreans, meanwhile, took Singapore very seriously, obviously putting far more effort into the staging and photo-ops than technical meetings.

Nixon was seeking to wind down the Vietnam War without an open admission of defeat—peace with honor. He hoped Mao would help him by leaning on China’s occasional North Vietnamese ally. Mao was ultimately unable to pressure North Vietnam much on the war, but still, this was a good reason for Nixon to go. The war was tearing the United States apart and absorbing far too much military power. Nixon was understandably desperate and rolling the dice with Mao was worth it given just bad the Vietnam War had become by his presidency.

Trump faces no such pressure and no such desperation for a similar gamble. It is not true that North Korea poses an existential threat to the United States. The North is rational. We can live with a nuclear North Korea; we can continue to contain and deter it. Hence Trump needed not to jet off unpreparedly for a hasty summit. North Korea is a small country without nearly the weight or importance of China in international affairs. Trump could have pushed harder in pre-negotiations for a better deal. There was no urgent need to go, much less give Pyongyang the propaganda victory of a one-on-one meeting with the U.S. president.

3. Nixon used the China opening against the Soviet Union. Trump faced no such strategic need.

A central goal of Nixon’s rapprochement with China was to use Beijing as a wedge against the Soviet Union—what Nixon called “triangular diplomacy.” Recognizing (eventually) Red China was indeed a concession to brutal, repressive regime, but it served a larger strategic and moral goal—containing and ultimately defeating the far more dangerous Soviet Union.

Trump faced no such pressure and got no such linkage benefit. His one-time, skylarking meeting with Kim Jong-un had not noticeable improved the U.S. strategic position in Asia. In desperation, Trump is now suggesting that this meeting forestalled a regional nuclear war which might kill millions. But this is transparently ridiculous: it was Trump himself who ginned up last year’s war crisis against the nearly monolithic opinion of the North Korea and nuclear expert communities that war was unnecessary. Containing and deterring, sanctioning and isolating North Korea are feasible options that did not require this photo-op summit victory for the North.

Perhaps if the United States today was in the more dire straits of 1972—in a long, inconclusive war, facing two other large, truculent opponents—Trump’s Singapore gamble might have been worth it. But the stakes of Trump-Kim summit were far lower and the international dangers exiting such a gamble were far less. Nixon played a weakening, Vietnam-era hand well, while Trump played a strong hand poorly. Singapore simply was not as necessary as Beijing 1972 was.