Trump's Big Mistake: He Hasn’t Withdrawn From Syria But Doubled Down 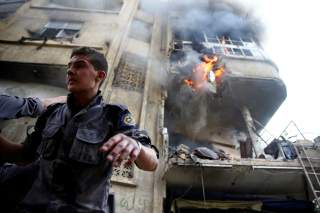 Following the highly successful raid to take down ISIS leader Abu Bakr al-Baghdadi, President Trump announced he was tired of “endless wars” and—for the third time in his presidency—said he was withdrawing all troops from Syria. But then he changed his mind—again—declaring U.S. troops would stay to “secure the oil.”

Trump’s instincts to get out of Syria are solid and highly beneficial to America; his willingness to be talked out of good policy is neither.

Three times in the past 18 months Trump has announced American troops would be withdrawn from Syria. Three times senior administration figures or influential advisors walked him back.

In March 2018, after it had become clear the U.S. and Syrian Democratic Forces (SDF) were successful in their efforts to drive ISIS out of their so-called capital Raqqa, Syria, Trump said, “(w)e’ll be coming out of Syria, like very soon.”

Barely a month later, then-Secretary of Defense Mattis poured cold water on the idea, countering, “We do not want to simply pull out before the diplomats have won the peace” and directly contradicting the president’s stated intent, added that he wanted to leave a “strong and lasting footprint” in Syria.

Trump apparently capitulated to Mattis’ pressure and the troops weren’t withdrawn. Instead, they sat in the Syrian desert, searching for something to do. Since there was no longer a valid military purpose for the troops, they went in search of other missions, variously identified as keeping ISIS down, countering Iran, or protecting the SDF from Turkey.

By the end of 2018, however, Trump had apparently soured on Mattis and again declared the troops in Syria would be withdrawn, this time prompting Mattis’ resignation. With Mattis now out of the way, it seemed the troops would actually be withdrawn this time.

Instead, then-National Security Advisor John Bolton provided the pushback. Again, Trump capitulated to the pressure. Although the number of troops was partially reduced, the core presence of American troops on the ground in Syria continued – without an attainable military mission and in the absence of any criteria that would ever signal the mission’s end.

After firing both Mattis and Bolton, however, Trump’s patience seemingly came to an abrupt end following an October 6th phone call with Turkish president Recep Erdogan. American troops, the White House said, “will not support or be involved in the operation, and United States forces, having defeated the ISIS territorial ‘Caliphate,’ will no longer be in the immediate area.”

Trump took abrupt and bipartisan heat for saying we would withdraw. Pundits on both the left and right excoriated the president. Congress passed a resolution with an overwhelming majority of both parties condemning the move. Then, according to reports, Senator Lindsey Graham and retired 4-star general Jack Keane gave Trump a new reason to keep troops in place.

“I like oil.  We’re keeping the oil” in Syria, the president said, and the United States would, therefore, “leave soldiers because we’re keeping the oil.” Thus, yet again, Trump had been talked out of enacting sound military policy. Far from benefiting the United States, keeping U.S. troops on Syrian soil will impose significant costs on our country with no potential for gain.

Since the first and second withdrawal announcements came and went without action, American troops have been both killed and wounded in action. They did not die in the noble pursuit of defending America—they lost their lives in the absence of a mission, devoid of purpose, while the nation’s political and military leaders searched for a reason to avoid withdrawal. The risk has only increased since.

Already twice since the Turkish invasion of northern Syria last month, artillery shells have landed dangerously close to American troops.  Russian and Syrian combat troops have been moved closer to U.S. positions. Turkish military personnel are still engaged in lethal operations in the vicinity, and American troops remain in danger of friendly fire. Why are our service personnel daily risking their lives in this chaotic land where a civil war continues to rage and in which no American vital national interests are involved?

Not for any mission that improves American security, but to secure Syrian oil fields. Such a mission has no basis in international law. And Congress has not authorized U.S. troops to conduct operations in Syria (hence, no legal domestic basis). Moreover, even if there were a legal basis, there is so little oil involved that there is no strategic benefit to our country in light of the substantial risks.

There is nothing to gain by staying in Syria and a great deal to lose.