Trump's Foreign Policy 'Restraint' In Syria Could Be a Train Wreck 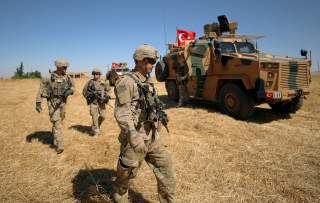 Donald Trump became president amid speculation that he would shrink America’s world role, especially in terms of its overseas military commitments. His recent decision to endorse Turkey’s invasion of northern Syria should be seen as an attempt to further that goal. The withdrawal was an attempt to extricate the United States from the Syrian quagmire by promoting Turkey to the position of stabilizer-in-chief in the north of the country. But Trump is getting retrenchment all wrong in Syria. Passing the buck to Turkey is already proving to be enormously controversial in domestic politics and will almost certainly worsen America’s reputation abroad. For these reasons, it might even backfire and make sustained military retrenchment harder for the United States to achieve in the long run.

Northeastern Syria is a contested region that fell partly under the control of the Islamic State during the Syrian civil war. Now, that vast expanse of land east of the Euphrates is under the jurisdiction of a coalition of Kurdish groups and armed militias known as the Syrian Democratic Forces (SDF). The SDF were indispensable U.S. allies during the fight against the Islamic State. In fact, absent the Kurds’ heroic efforts on the frontlines, it is doubtful whether the Islamic State could have been destroyed as a territorial entity without a costly ground invasion by U.S. forces.

Turkey, however, accuses the SDF of being terrorists themselves—a claim based on the fact that some elements of the SDF coalition have ties with Kurdish groups operating inside Turkey, including the Kurdistan Workers’ Party (PKK). This is a problem for Ankara because the PKK has waged an armed insurgency against it since the 1980s. For Turkey, it is imperative that Syria’s Kurds not be allowed to establish lasting control over the border regions between the two countries. To prevent such an outcome, Ankara has demanded that Turkey’s armed forces be allowed to occupy a buffer zone (or what Turkey calls a “safe zone”) inside Kurdish-controlled Syria.

After months of trying to forestall the need for a Turkish invasion of Syria (including an ill-fated plan for U.S. and Turkish forces to jointly patrol the border region), President Trump has now decided to stand aside as his counterpart President Recep Tayyip Erdoğan goes about unilaterally pressing Turkey’s interests in Syria.

It is impossible to know why Trump gave Erdoğan the green light to invade instead of preserving U.S.-Kurdish military cooperation. However, the President was probably driven (at least in part) by his long-standing desire to withdraw U.S. forces from Syria altogether. But if Trump views this as a first step toward significantly shrinking the U.S. military footprint in Syria and the wider Middle East, then he might well find himself disappointed.

Allowing Turkey a free hand in Syria will create more problems than it solves. Most importantly, U.S. security objectives do not always closely align with Turkey’s. For its part, America is primarily motivated by a desire to keep Syria devoid of Islamic State fighters and other groups who might use the eastern desert as a launchpad for international terrorist attacks. For years, Washington has worked alongside its Kurdish allies to achieve this objective. Their joint effort has been difficult, drawn-out, and bloody—but it has been an overall strategic success.

Turkey, on the other hand, is not moving into Syria with a single-minded focus on containing the same international terrorist organizations that concern the United States. Ankara’s preoccupation is to neutralize those same Kurdish forces that have been working with the United States to stabilize the region over the past several years. A conflict between Turkey and the SDF is in the offing, and it is entirely possible that the ensuing chaos will create enough breathing space for the Islamic State to reorganize itself in some form or another. Already, there are reports that thousands of Islamic State prisoners might be released or escape from SDF custody.

On the home front, Trump’s “abandonment” of the Kurds has drawn some stinging criticisms from the likes of Lindsay Graham, Marco Rubio, and Nikki Haley. These Republicans argue that Turkey cannot be trusted to keep Syria free of dangerous terrorist groups; only America’s own military forces and their formidable Kurdish allies can be relied upon to do this critical work. Moreover, leaving the Kurds to fend for themselves against the superior might of the Turkish military is dishonorable, counterproductive, and wrong.

Yet it is not just national-security hawks who should be concerned about Trump’s betrayal of the Kurds. Even those in the United States who passionately believe in the wider cause of military retrenchment should be alarmed by the attempt to pair the Turkish invasion of SDF-controlled territory with a U.S. exit from Syria. In fact, Trump’s hamfisted and unpopular attempt at retrenchment might actually end up undermining the case for a foreign policy of restraint.

First, the reaction of senators like Graham and Rubio is demonstrating in real-time that meaningful U.S. retrenchment requires careful preparatory groundwork on the home front—work that, it seems, is far from being completed. After all, this is at least the third time that Trump has publicly announced his intention to withdraw U.S. troops from Syria. On each occasion, the President has been rebuked by Republicans in Congress. (Lawmakers have moved to block Trump from withdrawing troops from Afghanistan and South Korea, too.) Without the cooperation of Congress, neither Trump nor his successors will find it possible to implement retrenchment in anything other than a haphazard, uncoordinated fashion.

Second, it has become clear that the downsizing of U.S. commitments abroad depends upon the existence of reliable international partners—that is, foreign actors who can be trusted to pursue goals that closely align with America’s own interests. In northeastern Syria, Trump is relying upon Erdoğan’s Turkey to fulfill this role. But with Trump himself shutting down Turkey’s access to Syrian airspace and threatening to “obliterate” the Turkish economy, it obviously strains credulity to suggest that the U.S. government has confidence in Ankara. If not even Turkey—a formal NATO ally—can be trusted to pursue a common security agenda, what hope is there for the United States finding “regional policemen” elsewhere?

Finally, the crisis in northeastern Syria demonstrates that military withdrawals should only be undertaken when America’s leaders can be confident that the aftermath will be tolerable to the United States. For if the redeployment of U.S. forces away from Kurdish-controlled areas of Syria is followed by a bloodbath (as some predict it will), then this will surely raise the prospect of a renewed U.S. intervention in the region. Indeed, it is not far-fetched to imagine that Republicans and Democrats alike might find themselves in agreement on this point—that President Trump was wrong to disengage from Syria, and that a sustained U.S. presence is required for both national security and humanitarian reasons.

In sum, Trump’s decision to allow Turkey a free hand in Syria might end up strengthening the case against retrenchment more than anything else. There is every chance that critics will see Trump’s version of military retrenchment as politically unpopular, unsuccessful without reliable international partners, and a prelude to humanitarian catastrophes. The point is not that ending U.S. involvement in foreign wars is an unpopular idea. Rather, restraint and retrenchment are treacherously difficult policies to implement in practice. Ultimately, Trump is not exactly the standard-bearer that proponents of such policies would wish for.