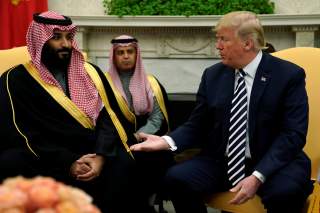 As the fallout from the disappearance and suspected murder of Saudi critic, journalist and U.S. resident Jamal Khashoggi continues, the Trump administration’s response seems to confirm our worst fears about President Donald Trump’s conflicts of interest and financial entanglements. His family’s mysterious relationships with Saudi Arabia may be compromising American values and interests.

The president defended Saudi crown prince Mohammed bin Salman (MbS), arguing that the Saudi prince has been deemed “guilty until proven innocent.” Trump has even floated an excuse for the Saudis by suggesting that “rogue killers” may have killed Khashoggi, despite the fact that there is every indication that such an act would have required the crown prince’s approval and that members of the prince’s own Royal Guard were at the Saudi consulate when Khashoggi disappeared.

Trump then called attention to a possible explanation for his behavior by tweeting on Tuesday morning that he has “no financial interests in Saudi Arabia (or Russia, for that matter). Any suggestion that I have is just more FAKE NEWS (of which there is plenty)!” Contrary to this claim, Trump has a long history of financial dealings with the Saudis. In the 1990s, Prince Al-Waleed bin Talal twice bailed out Trump’s businesses. (In a disturbing twist, Talal was swept up in MbS’s power-consolidating purge in which hundreds of influential Saudis and their families were arrested, detained and even allegedly tortured—before fawning over and pledging allegiance to MbS in an interview upon release. According to The Intercept, this move came after Trump’s son-in-law and close MbS confidante Jared Kushner allegedly shared top-secret U.S. intelligence with the crown prince, including names of Saudis disloyal to the prince (some of whom were subsequently arrested). In June 2001, he sold an entire floor of Trump World Tower to the kingdom, which they later used to house the Saudi Mission to the United Nations.

These entanglements have only grown since Trump entered politics. In August 2016, the Trump Organization registered eight separate companies seemingly related to conducting business in Saudi Arabia. On the day four of these companies were registered, Trump made explicit the link between Saudi money flowing into his businesses and his approval of the kingdom at a campaign rally in Alabama, saying, “Saudi Arabia, I get along great with all of them. They buy apartments from me. They spend $40 million, $50 million. Am I supposed to dislike them? I like them very much.” After Trump took office, Saudi Arabia was the first publicly reported foreign government to make a payment to a Trump business to the tune of $270,000, in direct violation of the Constitution’s anti-corruption Emoluments Clause. Just this year, the Trump Organization informed investors in its New York and Chicago properties that Saudis were among their biggest patrons, helping boost two hotels to profitability after previously reported losses. Additionally, as reported by McClatchy, Trump’s development partner in Indonesia, MNC Land, signed a memorandum of understanding in November 2017 with a construction company partially owned by the governments of Saudi Arabia and South Korea to develop the first phase of his Indonesian property in Lido—a move that goes against Trump’s pledge to have “no new deals” while in office.

Foreign officials appear to see Kushner, a political novice with massive debts, as an easy mark. Already, Kushner’s business ties may have played a major role in his copacetic relationship with the Saudi crown prince: Kushner’s decision to circumvent former Secretary of State Rex Tillerson and endorse Saudi Arabia’s blockade of Qatar reportedly came after Qatar denied his real-estate company a much-needed loan. He also treated the administration’s 2017 visit to Saudi Arabia more like a business trip than a diplomatic foray, bringing along Blackstone Group CEO Stephen Schwarzman, whose firm’s loans have helped keep Kushner Companies afloat—and who came out of the trip with $20 billion in investments from the Saudi government. In other words, Kushner, like his father-in-law, seems to be commingling his business interests with his responsibility to the American people.

Unless Trump divests from his company and releases his tax returns—or unless Congress does its job and forces him to do so—any country, or even any individual, has a ready-made avenue to bribe the most powerful man on the planet. As a result, the American public must rightly wonder whether Trump is acting in his own interests or those of the United States. To prevent this possibility is precisely why the Emoluments Clause is in the Constitution.

The administration’s response to Khashoggi’s apparent death offers yet another case of the problems Trump’s businesses create. American politicians, presidents included, have long turned a blind eye to the Saudi government’s wrongdoing, but even many of them seem to be taking a stand; meanwhile, Trump has leapt to the defense of a government from which he continues to personally profit.

Trump’s conflicts of interest have always posed an untenable threat to U.S. national security. Khashoggi’s apparent murder has thrust the issue into the forefront of American politics. Trump must prove he has Americans’ best interest at heart by stepping away from his businesses once and for all—or Congress must step in to force him to do so.