Tulsi Gabbard's Time In Congress Is Almost Up: What's Next? 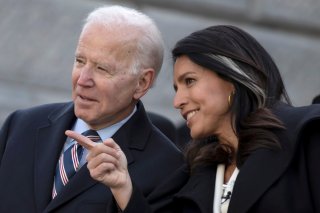 Rep. Tulsi Gabbard (D-Hawaii) announced in October 2019 that she’ll call it a quits on Capitol Hill to focus on her presidential candidacy, but clearly, that’s out-of-the-picture. Even though Gabbard won’t serve for Congress come November, she vows to look after Americans post-retirement.

Gabbard, 39, has represented Hawaii’s 2nd Congressional District since 2013 and ran to top the Democratic ticket for the 2020 presidential race. During her campaign — which was launched January 2019 — Gabbard noted she was “fully committed to my offer to serve” the nation’s capital and terminated her candidacy for reelection to Congress.

If she had been elected as president, Gabbard would have become the first and youngest female Hindu president in US History. However, Gabbard failed to meet the thresholds to hit the debate stage against her primary competitors a number of times and after dwindling poll numbers and insipid support, Gabbard dropped out of the presidential race in March 2019 and later endorsed presumptive Democratic nominee Joe Biden.

"I know Vice President Biden and his wife and am grateful to have called his son Beau, who also served in the National Guard, a friend," Gabbard said in a statement. "Although I may not agree with the Vice President on every issue, I know that he has a good heart and is motivated by his love for our country and the American people."

Gabbard, a member of the Hawaii Army National Guard, particularly works on issues relating to veteran and service member protection, as well as financial and banking policies that help Americans. Most recently, she’s helped with legislation on both the national and state level to tame the spread of the coronavirus.

State Sen. Kai Kahele (D), an active National Guard member, won in a four-way primary race to replace Gabbard for the seat on the Hill. Kahele will face Republican Joe Akana in November in a fight to keep the district blue.

Although Gabbard won’t be reelected, she’s still an active congresswoman—especially since coronavirus cases have spiked in Hawaii in the last month — and called on Gov. David Ige (D) to oust the state’s Department of Health director and chief epidemiologist due to lack of transparency. Just last week, headlines hit local news after the state Senate COVID-19 committee conducted a surprise inspection at the department, only to discover a disorganized workspace and miscounted contact tracers.

“@GovHawaii This is your responsibility. Your Health Director is keeping hundreds of trained contact tracers ‘on the bench’ because he doesn’t think they’re needed. Meanwhile, we have the highest infection rate in the nation. This is gross negligence,” Gabbard tweeted Tuesday.

Since the start of the pandemic, Gabbard has pressed Hawaii to form an “effective contact tracing team or strategy,” as well as encourage locals to wear a mask.

In terms of what’s next for her political career when her time in Congress is up, Gabbard told RollCall, “I’m going to continue to look for ways that I can serve. Stay tuned. I’ll let you know when I know.”