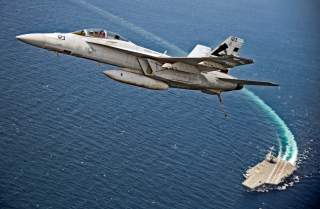 America could lose the next war. That is the conclusion of a report by the non-partisan National Defense Strategy Commission, which was tasked by Congress to assess the U.S. military the Trump Administration’s 2018 National Defense Strategy. The report’s warning should not be taken lightly, and Washington must act to ensure the U.S. is as prepared as possible if a clash overseas turns into an armed conflict. First, policymakers must recognize that overextension has caused America to lose focus. Second, it would be wiser to rebuild power projection, such as through the Navy and Air Force, than to waste money and lives fighting unnecessary wars of choice.

The report declares that “The U.S. military could suffer unacceptably high casualties and loss of major capital assets in its next conflict. It might struggle to win, or perhaps lose, a war against China or Russia. The United States is particularly at risk of being overwhelmed should its military be forced to fight on two or more fronts simultaneously.” This assessment is disturbing but hardly unsurprising.

If America could not handle Afghanistan and Iraq at the same time, how would it fare in two or more simultaneous conflicts against China, Russia, North Korea, or Iran? Moreover, America’s military is overstretched and fighting multiple wars. Fighting in Afghanistan and Iraq continues, U.S. ground forces are operating in Syria, and America aids Saudi Arabia’s humanitarian disaster of a war in Yemen. According to a U.S. Department of Defense press release on December 3, there are four ongoing active U.S. military operations across the world, including action in Somalia, the Philippines, and Pakistan. Since 9/11, all of America’s wars have claimed the lives of 6,978 U.S. servicemembers and—when future medical costs for veterans are added—will cost about $5.6 trillion.

With the federal debt approaching $22 trillion and unfunded liabilities amounting to an astounding $115.8 trillion, a day will come when budgets will be tighter. Already, the non-partisan Congressional Budget Office has warned that interest payments on the debt will surpass the cost of Medicaid by 2020 and Defense by 2023. If America is going to have the money to defend itself and deter rivals, it must get its finances in order. That includes entitlement reform and also some military changes.

Washington should consolidate its military presence abroad, wind down failed wars, and avoid getting into future ones. Nation building and a sprawling global network of about 800 bases in 70 countries distract America from near-peer threats such as China and Russia. Washington cannot focus on every threat, everywhere, all the time and it cannot be ready for a real emergency against a major power if its forces are disbursed and fighting wars elsewhere.

The Trump Administration’s National Security Strategy rightly points out that great power competition has returned and that it is overdue that Washington refocused on Moscow and Beijing. The National Defense Strategy Commission report also is correct to warn that a future state-to-state conflict would likely involve rapid, high losses resulting in possible defeat. Although war between two nuclear powers would be a foolish undertaking it could happen by accident or if escalation during a crisis got out of hand. For instance, in a war over Taiwan American forces would have a great distance to travel while local units would likely be overwhelmed.

This is why America needs to focus on maintaining and expanding its power projection capabilities, most notably its Air Force and Navy, instead of spreading them thin. That investment would help deterrence against, and preparation for, a crisis. Meanwhile, supporting the war in Yemen, staying in Iraq and Afghanistan, and a possible invasion of Iran or Venezuela all do the opposite.

Americans win when their military deters other countries from using force. But Americans lose when elected officials send thousands of sons and daughters overseas and spend trillions of dollars to fight unnecessary wars. Good strategy and appropriate defense spending are supposed to limit the loss of lives and money through deterrence and—when necessary—fighting to win. So far, policymakers have not gotten this message. Scattering America’s forces across the globe, fighting multiple failing wars and ignoring the need for a less-taxed Navy and Air Force to deter China and Russia is a grave error. It would be better for everyone if elected officials realized this sooner rather than later.

John Dale Grover is an assistant managing editor at The National Interest. He is also a fellow at Defense Priorities and a writer with Young Voices. His articles have appeared in Real Clear Defense, the American Conservative, and Fox News. Follow him on Twitter @JohnDaleGrover.